Concerning the claim that a police officer pulled a gun on Jim . 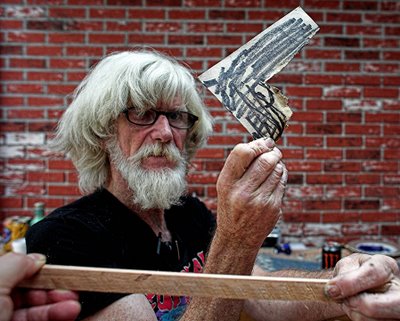 This afternoon I asked Jim to help clarify the manner in which the police officer in car 2723 presented his gun to Jim during their argument which occured at some time around 3:00 A.M. on Monday 17 July ,2006 in the street in front of 120 St. Marks Place . Jim made a cut-out of a gun and displayed it thus as he claims the police officer displayed the fire arm . This event was first reported in an earlier post on 18 July ,2006 on this blog.

The above account and demonstration is what Jim claims . There is a videotape of the event which may show and confirm what is stated and depicted above . I have not seen the tape . This claim was presented to the Civilian Complaint Review Board and to the Commisioner's Office .

I have not spoken to the police officer in question . I do not know his name . I have not in any form heard his version of the confrontaion between him and Jim . What is seen above is Jim's account of the incident told to me and demonstrated in the afternoon of Saturday , 22 July,2006.

The end of the 120 St. Marks Place encampment ? 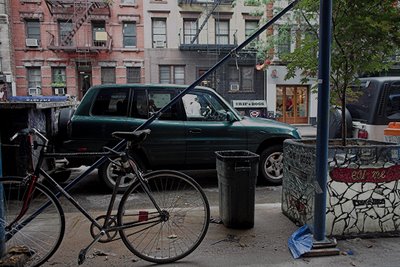 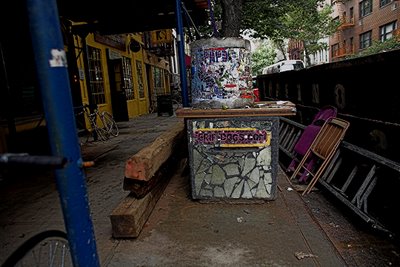 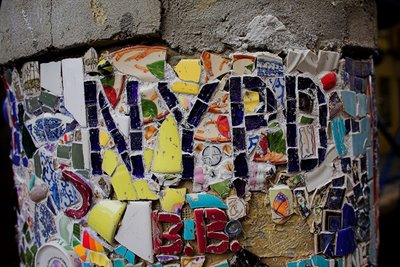 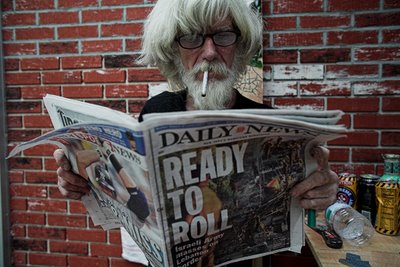 This morning Jim called me to tell me that police officers and sanitation dept. personnel broke down and removed his living and working quarters at 120 St. Marks Place . A waste receptacle now occupies the place that was Jim and Jesse Jane's home for 3 months .The large planters ,though , remain at the camp site, probably because they are very heavy and would have been too much work for a regular sanitation team to remove . Jim claims that ,with the exception of a few vide tapes , what was lost was not of great importance . He and Jesse were not at the camp at 6:00 A.M. when police and sanitation arrived to do their dastardly deed .

So what's next for Jim and Jesse Jane ?No one seems to know for sure . Jim claims that he will continue to be at 120 St. Marks Place to look after the owners property . He even claims that he may even sleep and work there occasionally but likely not often . He certainly wants all who want to , to stop by 120 St. Marks Place anytime they would like. Especially he would like folks to stop by to hang out on Friday and Saturday nights . 120 St Marks Place is still a nieghborhood thing you know .

When I spoke to him this afternoon at his worksite at 3rd ave. and 11 st. he was busy working on big new mosaics , un-phased by recent events and planning to move forward ...one way or another . 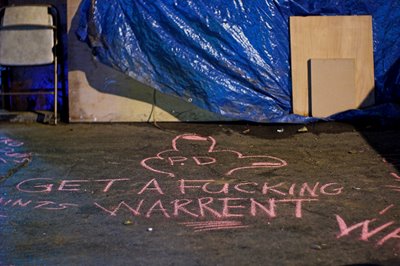 Last night more chalk was used to scrawl a message to NYPD in response to the photographing of Jim's campsite on St Marks Place by multiple police officers. A witness to the event informed Jim and enraged , Jim went right away for the chalk and set about chalking up the street next to his camp . Again he did not sleep at the camp on St. Marks Place. 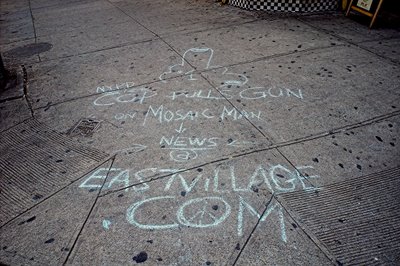 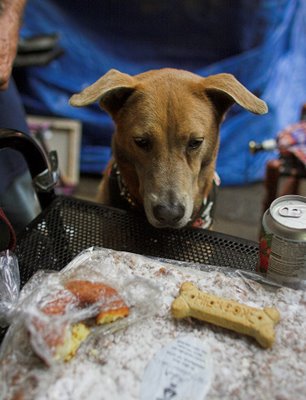 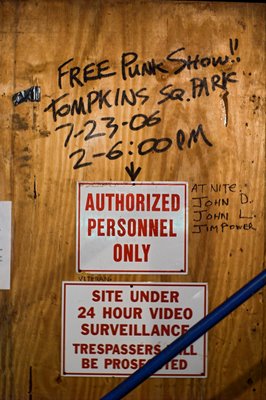 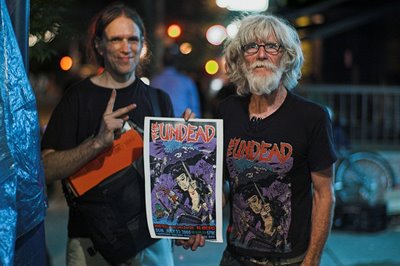 Yesterday Jim was still chalking on the sidewalk his message of anger to the NYPD . Again yesterday there was another angry exchange between Jim and members of the NYPD . I suspect that this situation is growing out of control and if not checked will come to an unpleasant end for Jim . Jim will only become more a target for harrasment and possible arrest if the angry confrontations continue to grow in frequency and intensity..In the end Jim stands to lose his freedom and the domestic pleasures that he has had with his friends and with Jesse Jane at the sidewalk encampment at 120 St Marks Place . I am not excusing the NYPD for whatever behavior was improper in all of this . Where blame is due ,there it should be placed , on all parties , fairly . For such a long time Jim had the good favor of the NYPD which in part made it possible for him to live at his sidewalk encampment . Jim showed his respect for NYPD by honoring NYPD several different times in his mosaics . Something worthy came from this accord everyday . It's sad that that accord may permanently end .

An aside here ; there will be a punk rock concert in Tompkins Square Park on Sunday 23 july,2:00 to 6:00 pm . All classic bands including ; The Undead , Nihilistics and David Peel .... all afternoon .

Friday night was a good night for Jim and friends 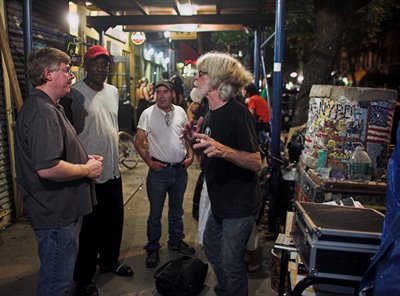 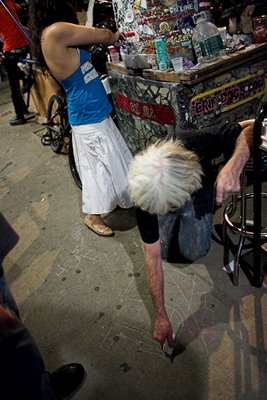 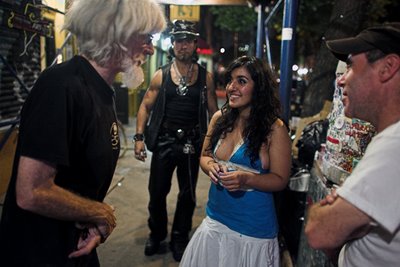 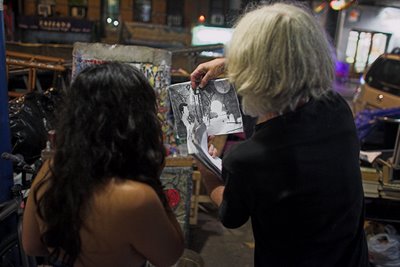 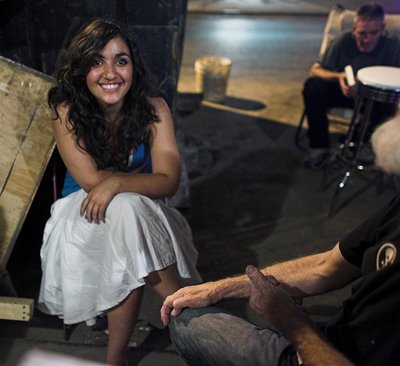 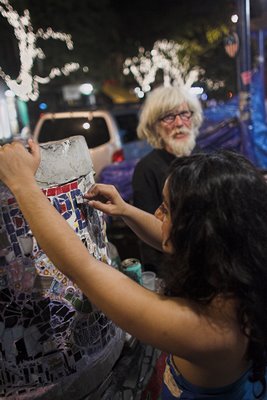 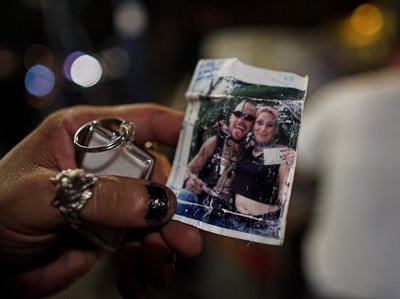 Friday night many of the curious in the passing crowd stopped to talk to Jim. Several of Jim's friends including Outlaw ,John , Jim and Mina were also with him enjoying the evening . Jim talked of many things .

For a while he was describing to passers- by what he thought the "Freedom Tower" should really be . While they watched he took a shard and scratched an image on the sidewalk of his vision of the tower . The tower would be , at least in part , round and among other special features would have a small train that traveled around the large tower to move people from one area to another .

Jim also spent some time with Mina studying the plans for the project that he is working on now at 3rd ave. and 11 St. . He was also familiarizing her with some of his special mosaic techniques . Mina is an acomplished portraitist and will be because of her skills a valuable assistant on this project . She may also help Jim with his website .

Later in the evening Outlaw showed me a picture of his girlfriend who has been away for a while. He told me that he misses her greatly , which I can believe because I remember how they were always together .She will be back in a few days . Outlaw told me that when she returns that he will take her out and spend his entire check on her and then he will take her to Coney Island and campout on the beach with her .

It is sad that after such an enjoyable and good-spirited evening that the confrontation with police early the next Monday morning had to happen and threaten to end such evenings at 120 St Marks Place forever . 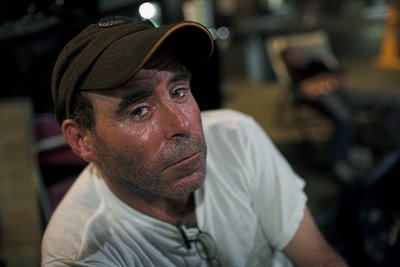 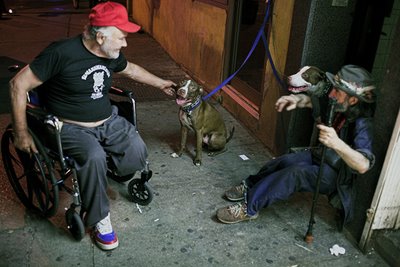 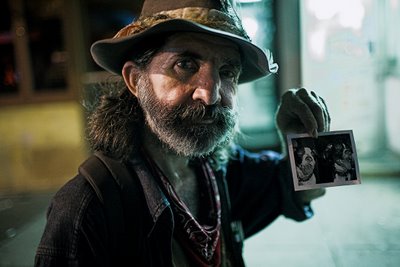 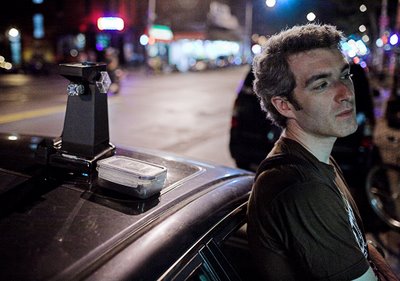 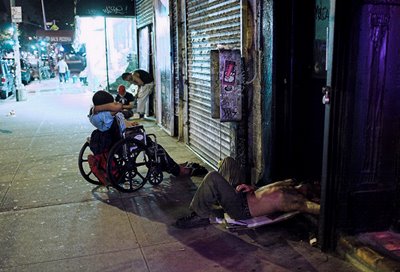 Early Tueseday morning I went for a walk , heading to Jim's campsite and then down ave A . At the sidewalk encampment John Lockwood was in charge ,watching the things at the camp that belong to Jim since Jim had decided after his encounter with police early Monday morning that it might be good to be off the street for a night or two . He was staying with a generous friend . After talking to John for a while I headed homeward down St. Marks Place to ave A and from there south to home .

I stopped at Ray's Candy Store where Stanley and his two dogs ,Taras and Tiberius , were being photographed by Ilya with his Polaroid "Big Shot " camera . Ilya has been photographing people for some time now in the East Village with his "Big Shot " working to create a book of East Village portraits . He gives the subject of his portait the Polaroid and he keeps the negative for his archive .

A little bit later Victor rolled by in his wheelchair and gave a hello to everyone including a pat on the head for Tiberius .

I went inside the candy store and talked to Ray for a while who wasn't making much money on this early Tuesday morning . After a half hour or so with Ray catching up on nieghborhood news , I left for home , passing on the way another more desperate sidewalk encampment . 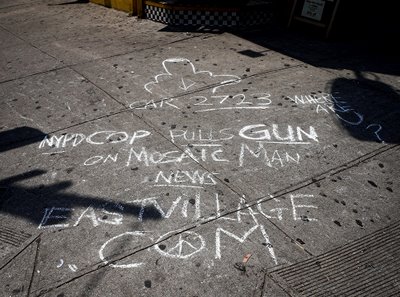 This morning Jim chalked this message at the corner of ave. A and St. Marks Place . The message is the result of a confrontation between Jim and a police officer . Monday at 3:00 AM a police car pulled up to Jim's camp and an officer asked him what he was doing . Jim responded and a dialogue turned into an argument with Jim angry and the police officer angry . Jim ,I'm sure ,was responding to the situation in his own innimatable way as the police officer threw water on Jim. Then, according to Jim , the police officer removed his side arm from its holster and displayed it so that Jim could see it clearly . After 15 minutes or so of intense argument the police car drove off leaving Jim feeling disturbed ,angry and unsure of what would come from this event ,especially since just a few days earlier the police had told Jim that he had to remove his camp from the sidewalk by Monday .

As can be seen the number of the patrol car is known . In addition to the number there were witnesses and a video of the event . Jim has talked to the Civilian Complaint Review Board and given them the available information .

This event may well change the situation on St. Marks Place for Jim ,his camp and his friends . Monday night Jim and Jesse did not sleep at thier sidewalk camp choosing instead to sleep inside at a friends house .