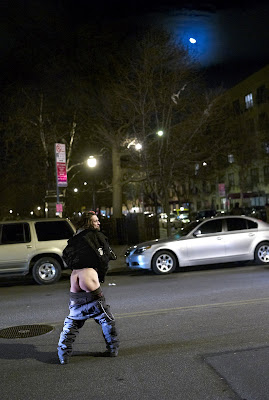 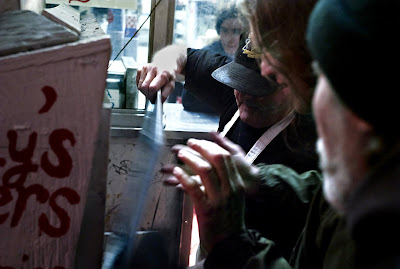 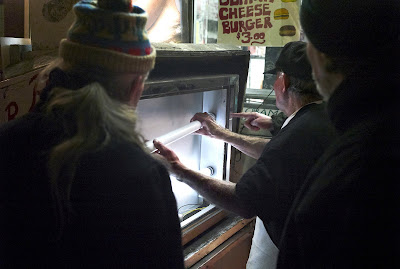 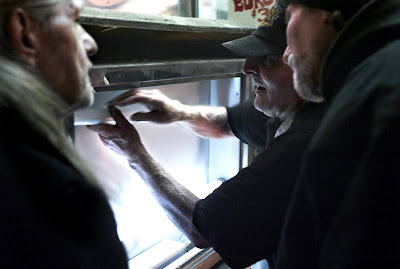 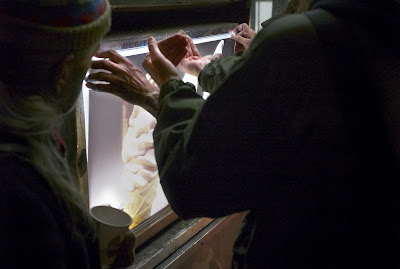 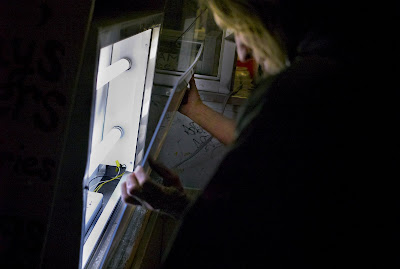 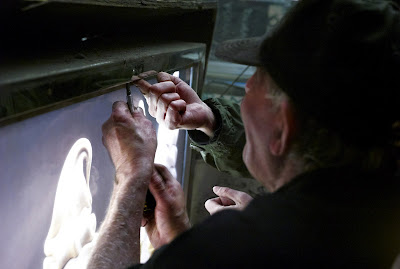 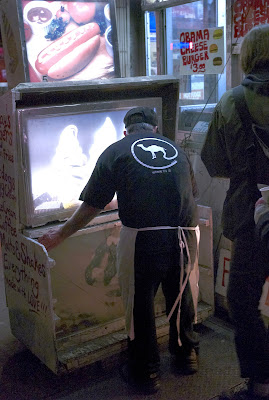 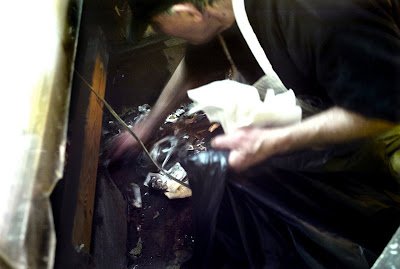 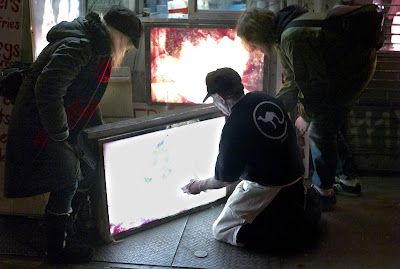 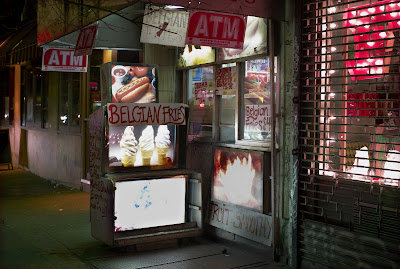 Hoping that brighter signs might mean more business , Ray changed the bulbs in his unique avenue A sidewalk tower of brightly lighted cones , hot dogs and fries . Times are very difficult for Ray and his struggling candy store , his business is failing , so any change that he can afford that might improve his business has to be made . This Thursday night the change was light bulbs .
Ray's lighted tower of signs had once been , many years ago , his newspaper rack . After years of enduring thieves stealing his papers , and his newspaper profits , Ray appropriated the wood structure to another use . He put light boxes with pictures advertising his products on the former rack and it became and still is the most noticeable stack of lighted images on avenue A.
There was no shortage of personnel out side his candy store .How many of them were actually required to help him change the bulbs is disputed .There was much chatter , advice given , many extra sets of hands ... and uninvolved observers to the side too . In the process of changing the bulbs Ray cleaned the base of the old rack : he found some dead things , a used syringe and trash from years ago . The bulbs were finally changed and a brighter tower of lighted product presentations now prevails today on avenue A at Ray's Candy Store .

Chaz , Dre and G on Avenue A at Ray's Candy Store 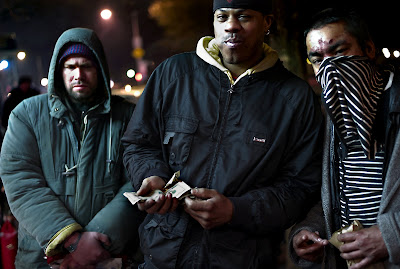 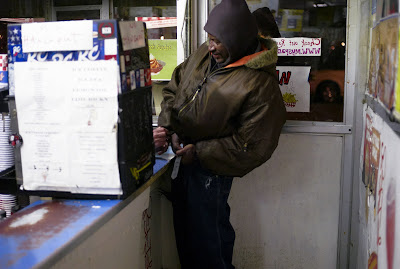 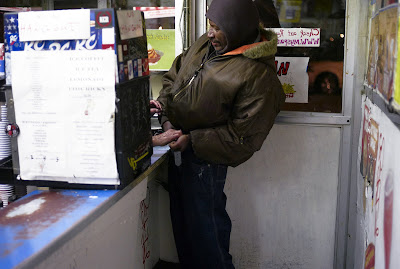 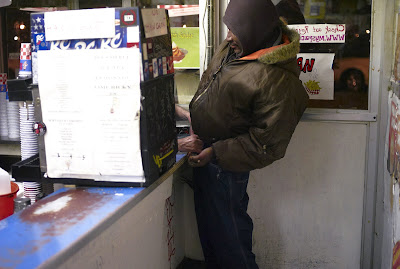 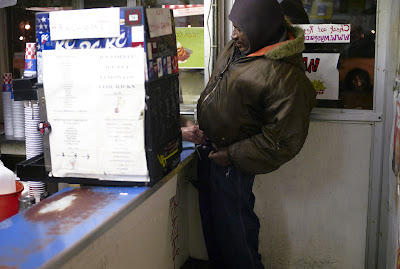 No , it's not a "happy ending" to one of Ray's famous egg creams . Cochise is very drunk . Ray wants him out of his candy store but his pants keep falling down when he attempts to walk toward the door . From the smell there's likely a good sized load in them too .
Cochise repeatedly pulls up his pants and tries to tighten his belt but he is so drunk that he can't buckle his belt so they just fall down again when he makes a move toward the door . In the last frame Ray finally buckles his belt for him so that he can walk out the door of his candy store .
# posted by Bob Arihood @ 3:28 AM 4 Comments

A "Villager" Fan in Avenue A 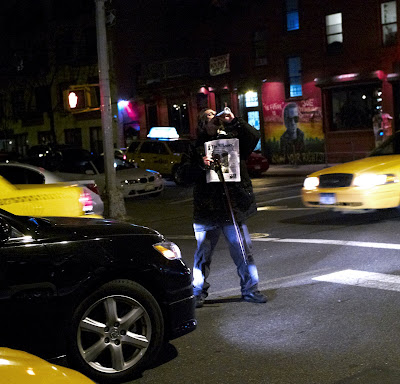 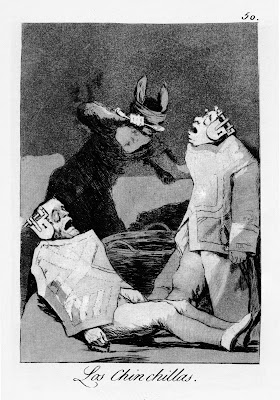 From Los Caprichos by Francisco Goya

Bob first said "why did you write that I was a space alien ?". We answered " we didn't write anything about aliens , but once you did say that you were sent here to save Earth from a giant asteroid " .

Black-Ops Bob was back on avenue A when we saw him for the first time since his incarceration in the psych ward at Bellevue Hospital ; an event that we wrote of here in several posts recently . We did mention that he had secret nuclear weapons plans but nothing else ; not even his MySpace page did we mention .

One summer afternoon in Tompkins Square Park while sitting on a park bench on Crusty Row Bob had shown us a number of drawings of different devices including an anti-matter drive and an electro-magnetic pulse generator but nothing incriminating .Perhaps , as is so with many of us , there is a darker , more obscured facet to Bob but from what we know of him , Bob is a good hearted guy that is generous and generally helpful to others . He's provided food and lodging for many a hungry and homeless soul from Tompkins Square Park or the neighborhood in general for years . Right now he has room mates that have nowhere else to live . His fault was to not pay his rent and perhaps also a faulted decorum ; they came for him and took him away for that and nothing else ; one thing led to another and he was locked-up in Bellevue .

When we saw Bob he was clearly medicated . He confirmed Resperdal . A bit soft looking and slow to answer it was all very clear . We were told that Bob has again had some trouble concentrating on paying the rent .

Bob now has handlers that he must visit on a regular , timely basis and of course he must take his Resperdal too. If he misses a visit they come looking for him ; standard procedure. If he doesn't take his Resperdal the handlers will come for him and will likely take him back to Bellevue . At Bellevue if his handlers deem it necessary they will restrain him and spoon it to him ... all under nominal doctor's supervision of course .

Saturday Night at Ray's : An Update on Ray's Candy Store ... 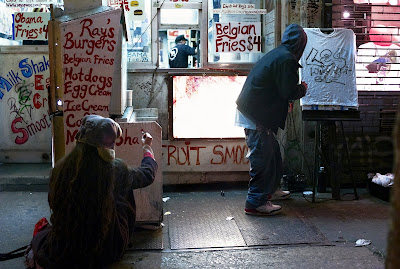 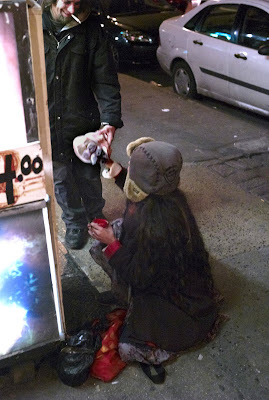 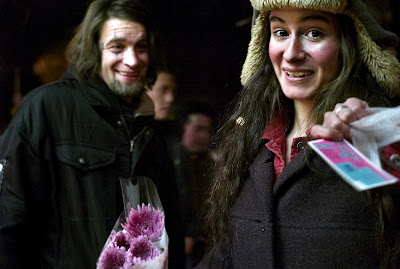 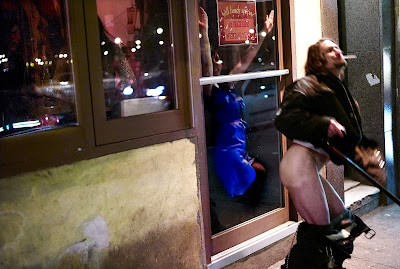 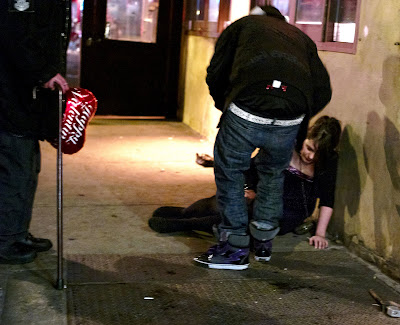 Not everyone achieved a happy ending to this years St. Valentines Day but most on avenue A were able to get trashed , have fun and still find their own way home . Cupids big day Saturday night , holiday that it was , was not a big money maker for Ray . Ray needed more than what was earned this weekend . The rent is still unpaid and there's the matter of that bad check to Con Edison . Times are tough for Ray and his Candy Store these winter days and there is still no help with Rays Social Security problems .
Though we have been trying for a few weeks now we have not been able to get professional assistance for 76 year old Ray in his so far fruitless effort to begin receiving his Social Security benefits . Most disappointing of all is that the city agencies that claim to exist to help the elderly with their problems have provided no assistance . Ray has some friends that do help though with the many tasks at the Candy Store .
This Saturday night Amy helped Ray by painting a new sign out front ; she has markedly improved the appearance of the store with her many hand painted signs . While Amy was painting out front Jimmy was also painting T-shirts for Ray to sell . His T-shirts , including ones with Obama painted on them , can be seen at Ray's and are for sale .
Jewels , who had somehow managed to spange enough to buy not just the usual can of Sparks Malt Liquor but also some flowers and some lottery tickets , surprised Amy with these Valentines day gifts .
Later in the evening to help Ray serve the Saturday night drunks that are now his main source of revenue , Amy went to work at the counter selling fries , hot dogs , ice cream , malts and egg creams . Jewels being left to his own devices decided to go next door and entertain some young women by dropping his drawers and dancing . 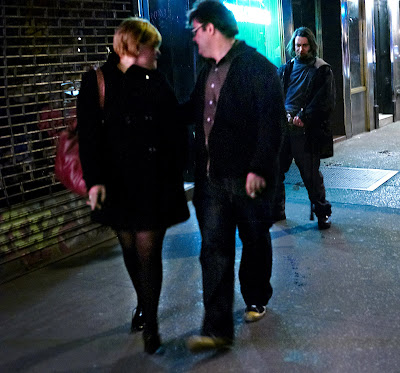