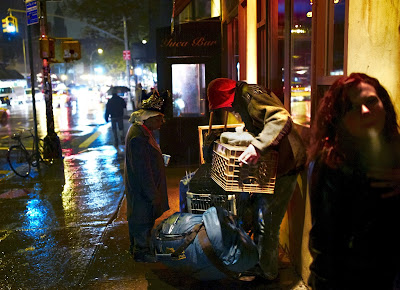 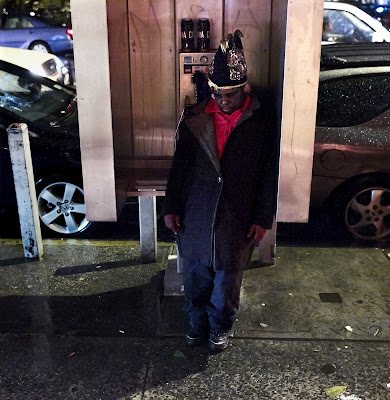 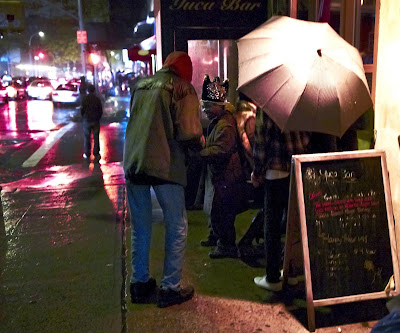 It wasn't just pounding an onion on a door that got Marlene (a.k.a. Hot Dog )some time at Rikers . That's what her friends had told us . Marlene Friday night added to the story : she also hurled a bottle at someone .Whatever , her sentence was 30 days .
Marlene told us that they treated her well after being arrested . She was in the hospital for a week and then arraigned and ultimately pleaded to get her 30 days , 20 of which she actually served .
On the avenue Friday night she found a party hat and with a half pint in hand tried to have a good time . A party didn't happen though and she decided to nap in the infamous wee wee phone (a.k.a. Pee phone ).
Later she bought a Cobra for a buck and was drinking it when the Friday night beat cop came by and welcomed her back with a " How you doin' beautiful" . Then he told her to hide her beer .Marlene put the beer in her coat pocket .
For a while Marlene talked and drank with some of her friends and some of the folks from Yuca Bar that had stepped outside to smoke . To drink more freely though she decided that it was necessary to depart avenue A for 2nd avenue where she could spange and drink at ease . She spent the rest of the evening on 2nd avenue but returned to avenue A much later to sleep on the sidewalk on a pile of folded cardboard boxes.
# posted by Bob Arihood @ 10:46 AM 4 Comments 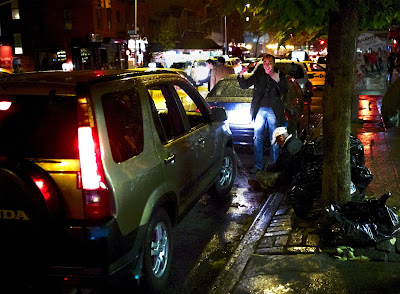 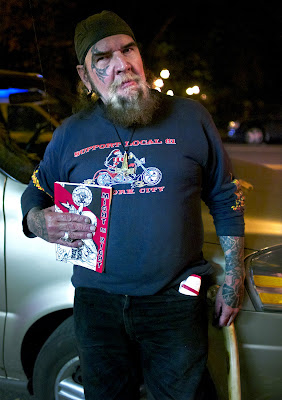 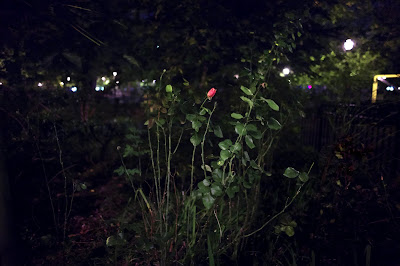 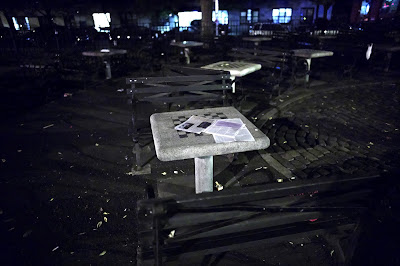 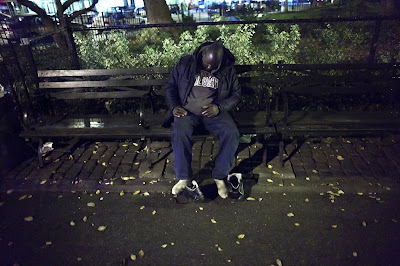 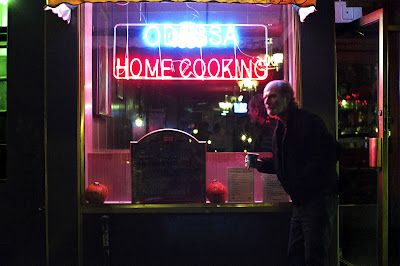 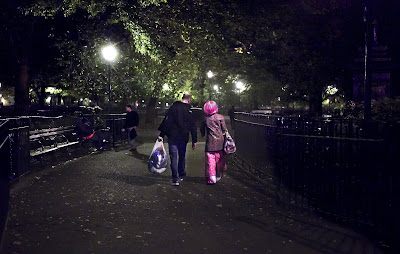 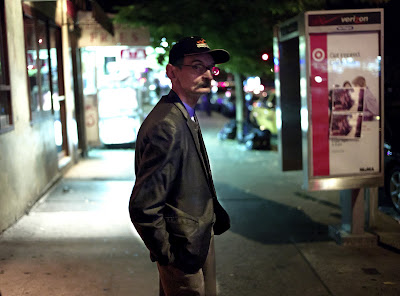 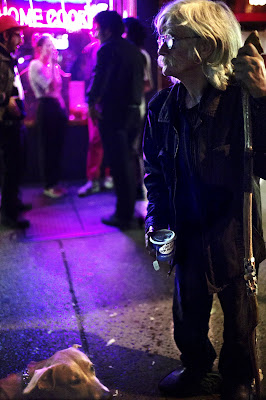 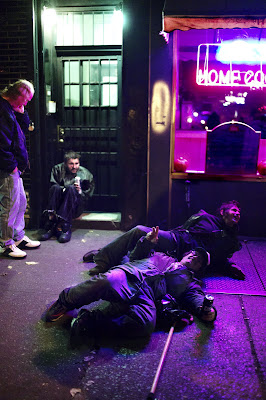 The images for the last 4 posts were all made with a new and very rare , at least for now , Leica M9 camera . The camera was made available to us by Foto Care @ 41 west 22nd Street in Manhattan .We thank Jeff , Vinnie and all for this one night opportunity .
We chose to push the camera to its limits for this post . All the images in this post were shot at an ISO of 2500 .Of course the imaging is even better at lower ISOs but we wanted to see what the camera would do in the extreme , which is how we would most often use it .
Of the images for the other posts , all except the St Marks post were shot at ISO 2500 . the St Marks image was shot at ISO 1250 . 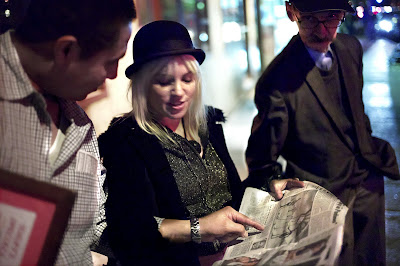 Eden's band "Eden's and John's East River String Band"was mentioned today along with R. Crumb in the NY Post on "Page six" .Folks were looking at the copy on avenue A last night .
http://www.nypost.com/p/pagesix/crumb_plays_the_blue_wzSXrJVIB8dwsme5dmhywI
# posted by Bob Arihood @ 5:03 AM 5 Comments 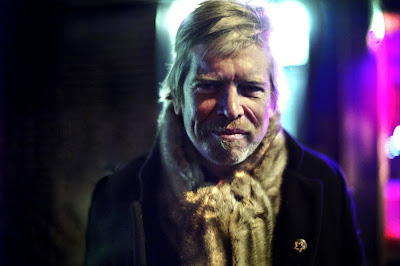 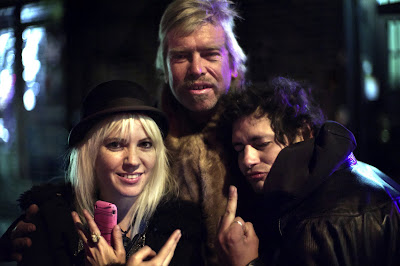 These are better days for Markey . The last 3 posts concerning him had all shown Markey with the black ,blue and red marks of the beatings that he had endured while living in the street . Tonight on avenue A we instead happily picture him with two of his friends.
# posted by Bob Arihood @ 3:59 AM 5 Comments 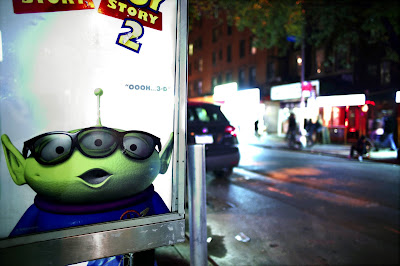 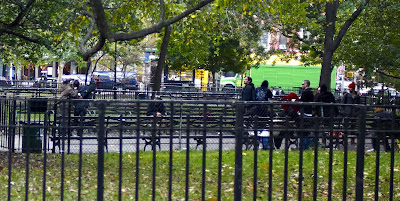 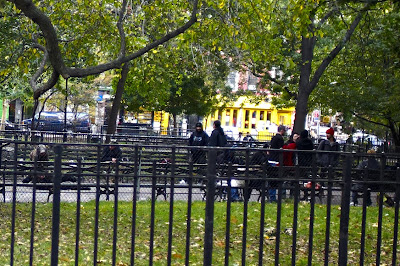 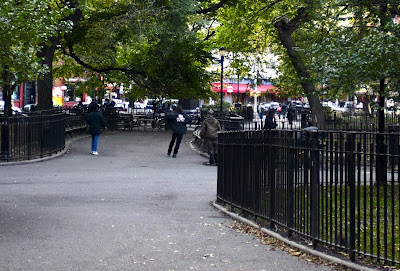 This afternoon most of the folks on Crusty Row just wanted to sit and drink their beers in relative peace and quiet .
L.E.S. Jewels was drinking his beers on the Row too .But Jewels had a problem. He couldn't just drink . He had to get drunk and obnoxious and mess with some of the other folks on the Row this afternoon .
A little guy that Jewels had annoyed , quickly and easily put him down and then ran him off Crusty Row .
Of course problems always return and Jewels being a problem for most returned to the Row several times . He was beat down of course . He had the black and blue and red marks to prove it too .
# posted by Bob Arihood @ 8:10 PM 7 Comments

Drunk with Blood on His Hand on Crusty Row... 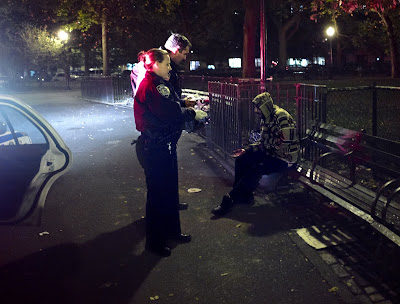 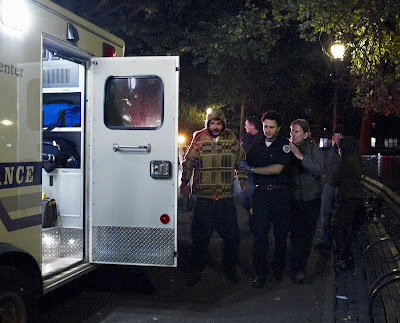 The call was for a heavy bleeder in Tompkins Square Park . If the man pictured above had been a heavy bleeder he likely would have bled to death . The call confused locations in the park causing a considerable delay in finding the location of the injured man . Fortunately the cut , though bad , was not bleeding dangerously .
Just a few weeks ago we pictured this same man ,Tim , being hauled away to the hospital . This time it was a cut hand . Previously it was a head wound due to a drunken tumble on the sidewalk .
We do not know what caused the cut on Tim's hand . Perhaps a broken bottle . Possibly a knife which would make this a more involved and topically important story .
This story goes nowhere as do most of the daily stories in the street . Mostly the same people are seen in trouble or in violation of a law , again and again . Police , Fire Dept and various medical personnel deal with it all daily . Mostly the same situations , sometimes violent , sometimes not , repeating again and again .
# posted by Bob Arihood @ 2:31 AM 3 Comments