On Avenue A , What's This "Shadow " Reader's Favorite Beverage ? Why , Sparks Malt Liquor Of Course 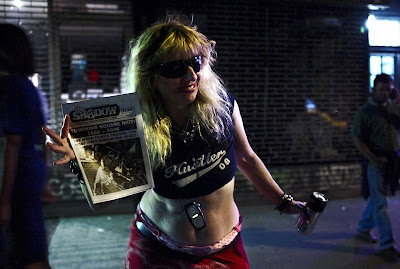 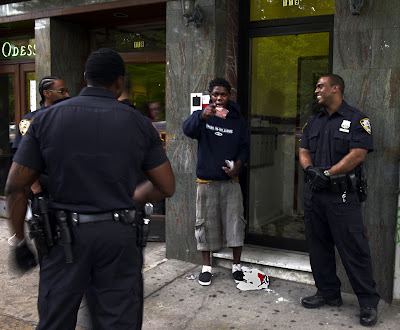 For the third day in a row Jose Palacios , above holding a pink slip of paper that is likely a restraining order , has been on avenue A again near Ray's Candy Store causing trouble . Mr. Palacio was recently arrested for harassing and assaulting Ray Alvarez in his candy store . We posted on this previous arrest recently here at NMNL . In this and other recent posts , not having his proper name , we have referred to Mr. Palacios as the "drink thief" . Mr. Palacios' bail was set at $1000 which he somehow managed to make . Mr. Palcios has an order restraining him from being in or around Ray's Candy Store at 113 avenue A . Today he was again clearly in violation of that restraining order .
According to witnesses today in keeping with his moniker "drink thief" , Mr. Palacios attempted to take a pitcher of sangria from patrons sitting at the window of Yuca Bar . Witnesses also noted that Mr. Palacios entered next door at Alphabets and also entered and menaced customers at both Odessa Restaurant and Odessa Cafe/Bar . Police eventually came to the scene at Odessa Restaurant after the owner of the restaurant walked across the street and got their attention . Personnel at both Alphabets and Odessa confirmed the account here that was provided by witnesses .
Mr. Palacios was taken into custody by police , though not cuffed , and removed by ambulance ,likely taken to detox at a hospital . It was not clear whether Mr. Palacios was actually arrested .
# posted by Bob Arihood @ 9:15 PM 1 Comments 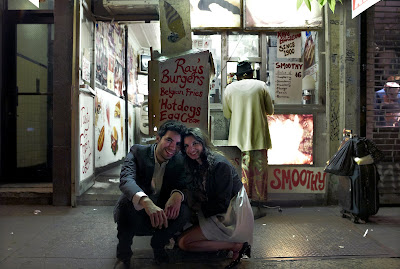 Last night Olivier and Marion returned to Ray's . Both live in Paris now but had in the past lived in New York . We last saw Olivier a couple of years ago when he was making his last visit to Ray's before returning to his native France .
Last night Olivier and Marion were doing what so many others do when in New York City . They were visting Ray's world famous candy store . They were reminiscing with Ray while enjoying some of Ray's world famous Belgian Fries and Hot Dogs . One helping was not enough though . Shortly after their initial visit with Ray and his culinary delights they returned to his candy store for more of the same .
# posted by Bob Arihood @ 6:33 PM 5 Comments

The Avenue A Groper is Back in TSP

We had hoped for better . She did try to leave . She was gone for almost 3 days . She says that she attempted to enter a detox program but that after minimal treatment , that is a good sobering-up , she was turned out to the street from which she had come .

We just spoke with her on avenue A as she was entering a drug store to buy batteries for her radio . She wanted to be able to listen to some tunes , as she was later having a cocktail or two .

Avenue A Groper Flees Avenue A and Tompkins Square Park ... 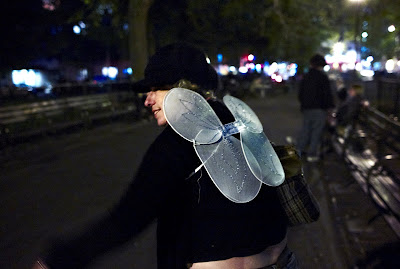 Sometime at the beginning of this week the Avenue A Groper took flight from avenue A and TSP . According to the Groper the violent scene on the avenue and in the park was becoming too much for her to bear .
Last week the Groper was attacked and beaten near the chess tables . Not by young Hispanic males as has been the rule in TSP lately but by old time park adults .
Two weeks ago she was slugged with a clenched fist , full force in the chest , by a male on avenue A ; a very painful , undeserved blow that made breathing difficult for her for 3 days .
More than once last week the Groper was also robbed of her possessions and money while sleeping in TSP .
Having no place to live or sleep other than in the uncertain reality of the park and the street where she was always vulnerable , the Avenue A Groper , seeking a better life , left for parts unknown . .
# posted by Bob Arihood @ 8:32 PM 11 Comments