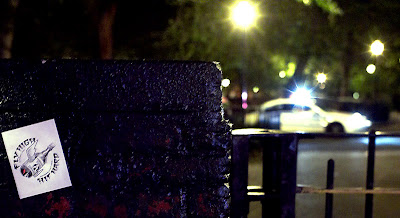 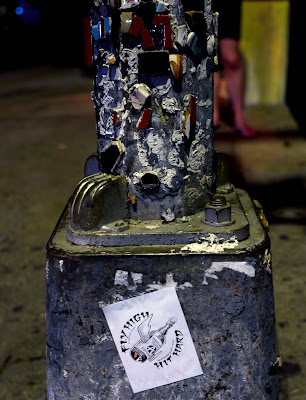 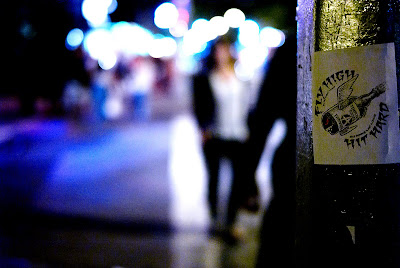 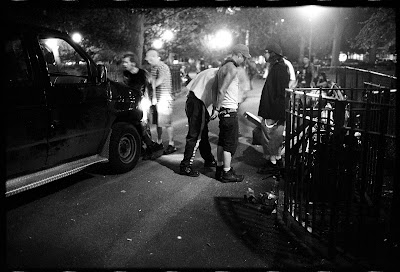 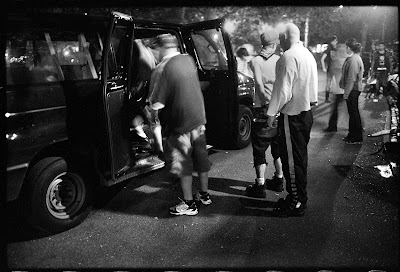 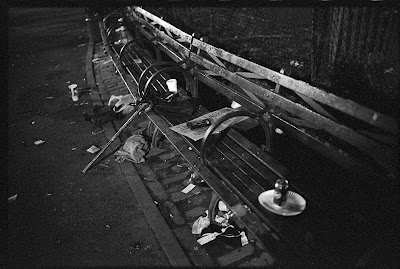 Nothing like the shooting of two men on 7th street at the begining of Thursday , this crime at the end of Thursday involved 3 people arrested for drinking beer on Crusty Row .
In a post published on June 12 we noted the return of the wandering Crusties to their historic home after being dispersed about Tompkins Square Park for a year or so ; their return a renaissance of Crusty Row .
http://neithermorenorless.blogspot.com/2008/06/crusty-row-renaissancve-in-tompkins.html
The last couple of weeks have seen members of the 9th precinct in plain clothes regularly sweeping TSP and of course sweeping Crusty Row too . Too many overdoses , too much dope , too much dope rumored laced with fentanyl ,too many dope dealers , too many needles lying about and too many beer cans strewn about the seating arrangement known as Crusty Row . NYPD is cleaning things up a bit in TSP and they are making some arrests to accomplish that end . The Renaissance of Crusty Row is becoming a new dark age for the Crusties .
# posted by Bob Arihood @ 3:14 AM 6 Comments 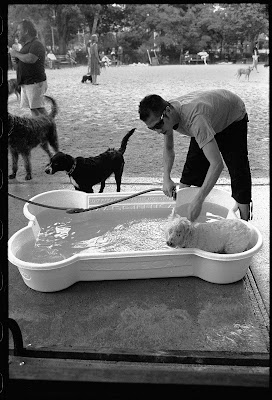 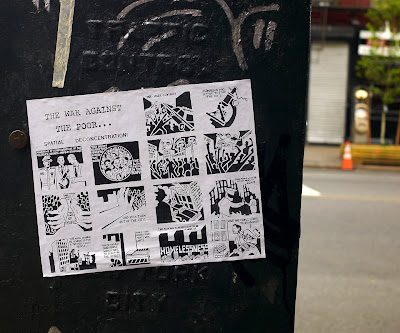 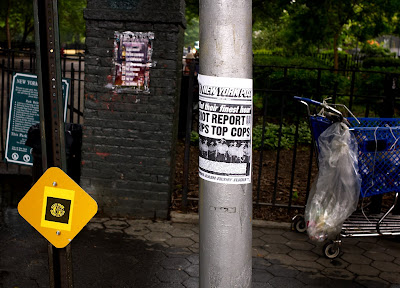 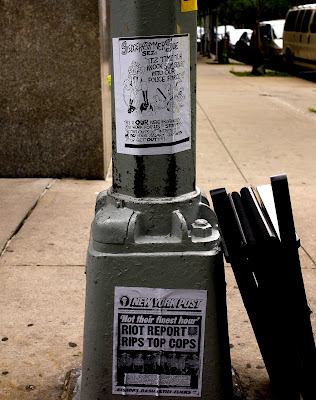 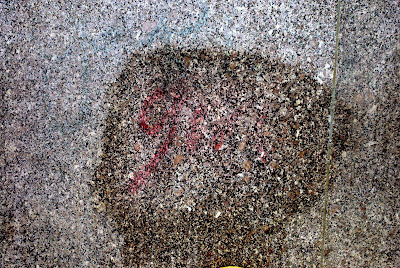 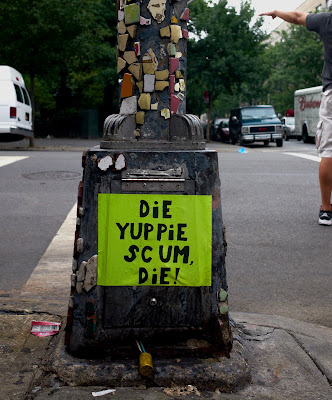 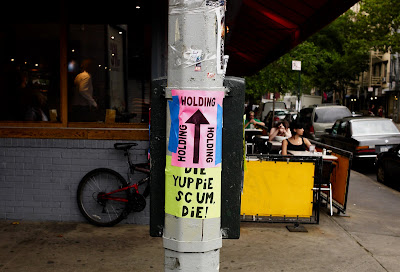 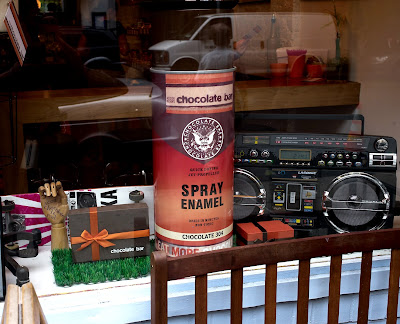 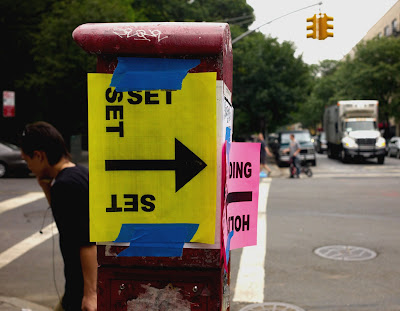 Those posters with there revolutionary messages are back . Numerous posters today were found placed on any convenient surface bearing political messages expressing sentiments of real anger , violence and hate . Messages perhaps for now more innocent than otherwise but still displaying language that is in content literally threatening violence .
Though the posters were mostly posted on lamposts and other street hardware , we have been told that some were today spray painted also on the walls of the Christodora . We have been told that these painted messages expressed the same sentiments as the other numerous street posters . We did not see these graffittied Christodora messages but we did see three smeared and stained areas on the avenue B facing walls where it appeared that an attempt had been made to remove some sort of painted graffitti .
With all the wild and indifferent commercial developement activity afoot in the neighborhood displacing so many longtime residents ; with all the new commercial ventures that appropriate and display --usually ineptly and insensitively--"East Village" paraphernalia and themes displacing loved venerable local businesses ; with film and television production companies feasting off what remains of the neighborhood's very cultural substance it is not unreasonable to suspect that some are just fed-up and are venting by placing posters on lamposts and graffittiing icons that represent this seeminly irresistable juggernaut of commercial developement activity .
People have their different individual abilities to tolerate abuse and loss but eventually most do stand up and fight back against that which oppresses and denies all hope . Eventually they will be heard from and more . As societies evolve through time they seem to forget this and must be occasionally reminded ... in a variety of possible ways , some very real and impressive in moment and proportion .
Which all reminds us of an evening several years ago out on 4th street . On this evening while we were grinding the valves of our old and tired Fiat 1100 R a young man approached . He asked if we could hire him so that he could learn how to work on cars . We told him that we were only doing this work out in the street like this because we couldn't afford to pay someone to do it . We had no business in which he could work .
The young man lingered as we ground away and the conversation went on with us talking about all kinds of thing : the neighborhood and growing -up in it , money , jobs , bosses ,rich people etc. One comment--a bit of wisdom only learned by being a down-and-out nobody in the street--that he made still stands out all these years later : "sometimes you have to hit a man in the face and knock him down just to get him to acknowledge that you exist" . 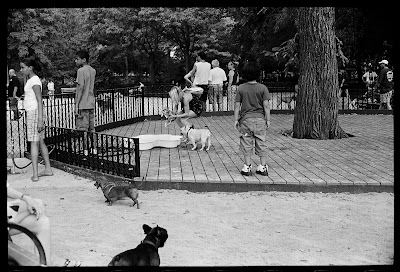 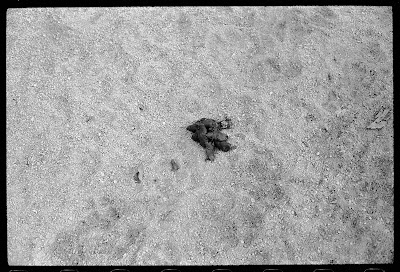 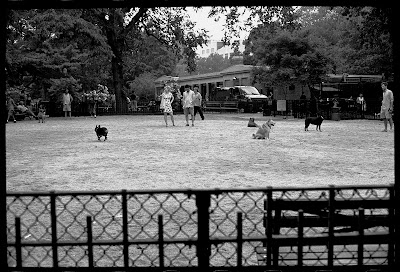 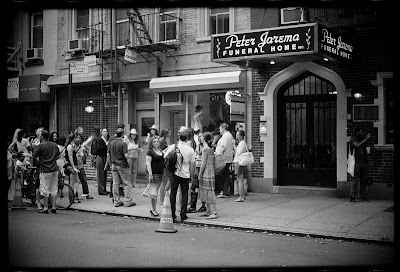 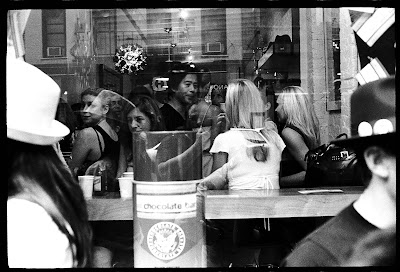 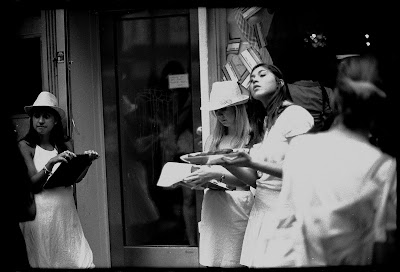 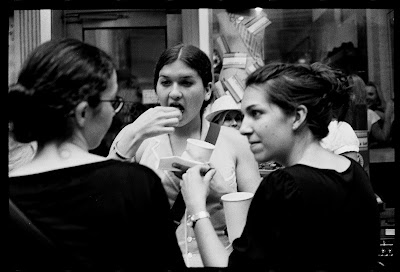 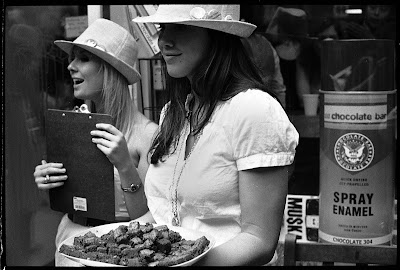 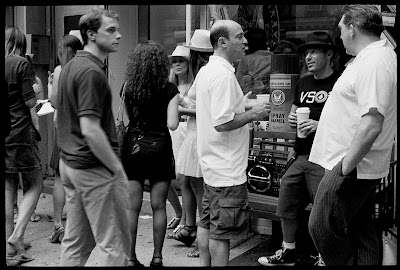 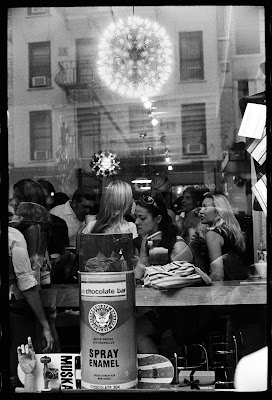 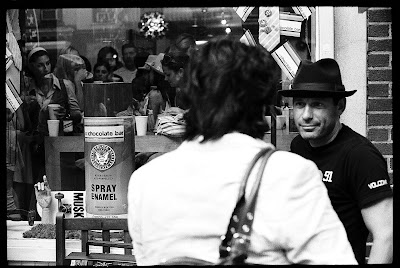 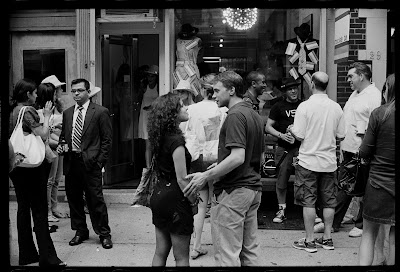 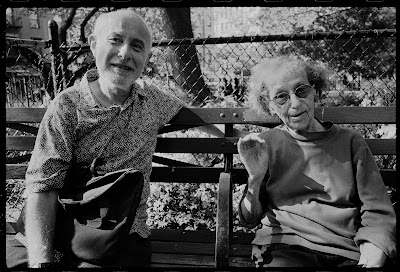 Yesterday afternoon we photographed former council person for our part of town , Miriam Friedlander , on her usual park bench in TSP talking to another park regular , Philip VanAver .
Ms. Friedlander was council person in this district for a considerable period of time . She preceded the current council person Rosie Mendez and former council persons Margarita Lopez and Antonio Pagan .
Ms. Friedlander says that she visits the park to talk to the people ; it is a "people's park" and she wants to know whats happening in the neighborhood .
We asked Ms. Friedlander if the people have a right to claim their communities as their own and to not have them developed out of existance by an elite group of wealthy and powerful individuals , corporations and educational institutions ? She responded , "yes , of course they do " .
# posted by Bob Arihood @ 3:50 PM 2 Comments

Concerts in Tompkins Square Park : A Reminder and Celebrity Birthday Party Up-Date ...and Free Pizza Too...

This coming Sunday , 27 July , the first of 3 major summer concerts will fill the park with some traditional TSP music and action from the groups listed above .
Not only is Aug . 3rd the last of the 2 TSP riot 20th anniversary concerts it is also the birthday of Yippie elder and songwriter ("Die Yuppie Scum"etc. ) David Peel . To celebrate David's birthday there will be an after concert birthday party across the street from TSP on avenue B in front of the 1988 TSP riot icon of community crippling development and gentrification , the Christodora . Everyone is invited to attend this grand birthday celebration ; bring whatever and have a really good time .
P.S. 22 July 2008 ; 2023hrs :
We have been informed that Chris Sileo owner of the Bowery Wine Co. , will provide free pizza for those who attend the after-concert birthday party 3 Aug. 2008 out front of the Christodora on avenue B .
# posted by Bob Arihood @ 7:51 PM 1 Comments 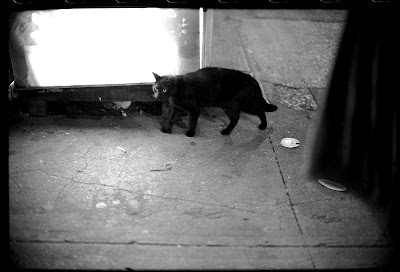