Six Views of Ave. A at Ray's Candystore From Not More Than Ten Years Ago 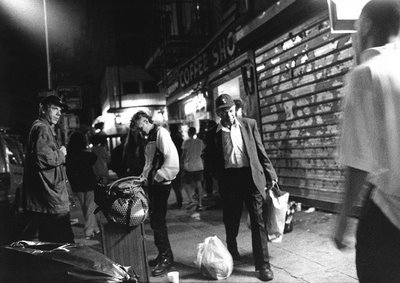 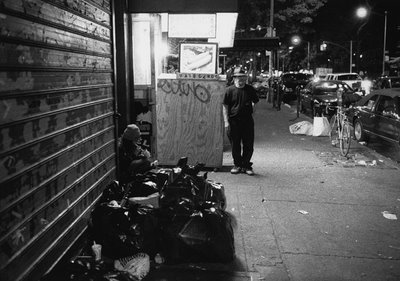 Ray , the master of the Egg Cream 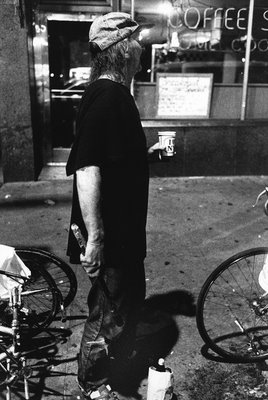 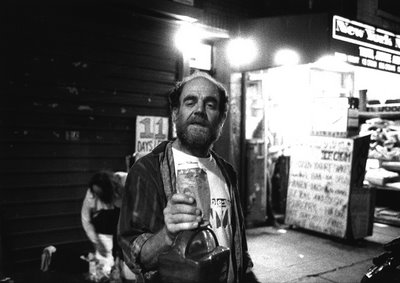 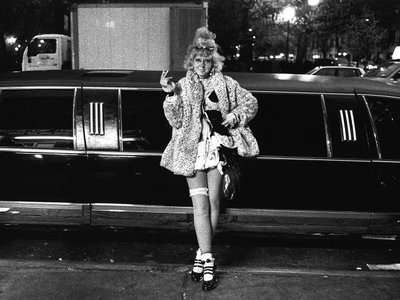 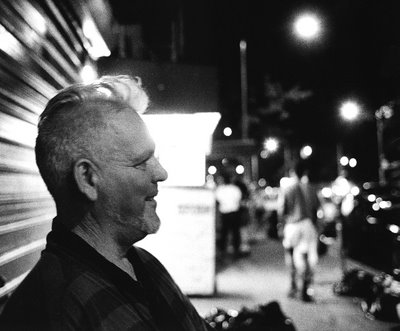 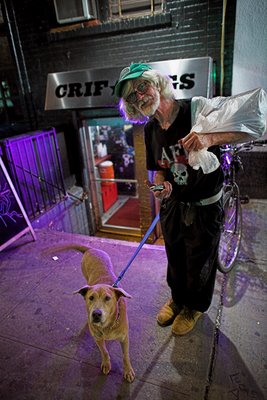 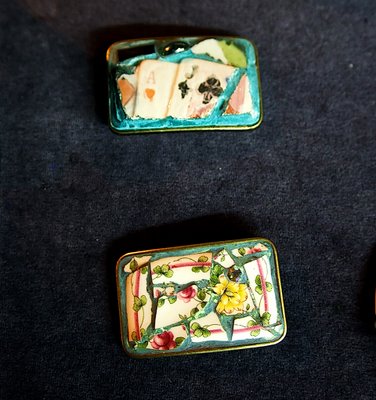 Yes , we said they were gone to Jersey ... but the best of plans often change in the executing so Jim and Jesse Jane are back...and for God- only- knows how long .

Jim and Jesse walked all the way from Hackensack , across the George Washington Bridge to upper Manhattan , where a kind and good Samaritan , fearing for their safety at 179th street and Broadway , gave them two twenties and three ones and said "take a cab out of here , get downtown now ! "and so they did . This Jersey stay is history .

While uptown ,just off the bridge , some one Jim did not know yelled " Hi Jesse " which surprised Jim who did not realize that his dog Jesse is sometimes more well know than him , the real and only true " Mosaic Man" . Earlier in the evening ,back in Jersey , Jim had met a guy named Dave who decided to walk with Jim and Jesse to New York . While still in Jersey the three decided to stop at a homeless shelter for some food and rest . Unlike later in upper Manhattan where Mosaic Man wasn't recognized , here at the shelter most everyone knew of both Jesse and Jim . Their fame had preceded them .

Now that Jim and Jesse are back in town let us all hope and pray that Jim and Jesse can find a place to live and work on a permanent basis so that the real "Mosaic Man" can get back to work making things like the belt buckles above . 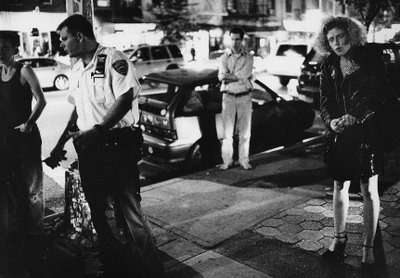 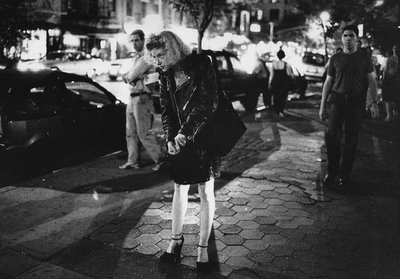 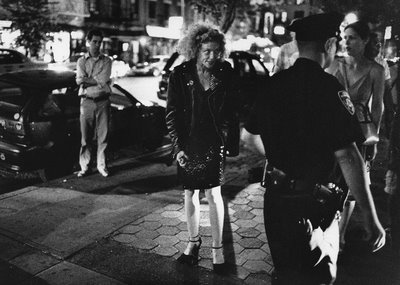 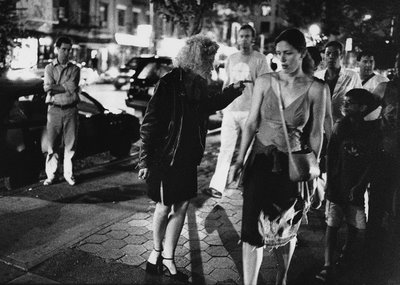 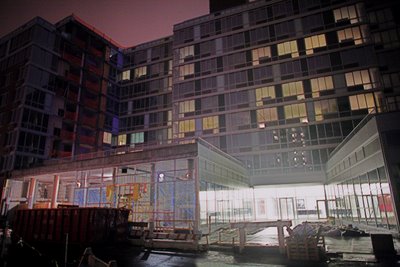 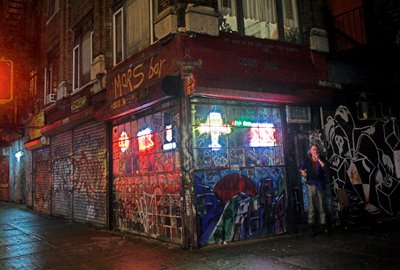 A definitive " dive bar" and a landmark on the downtown serious drinking scene , the Mars Bar has been around a long time . But with the big new building next door and stretching down the block on First st. .... how long can it last?

Concerning the Use of Force 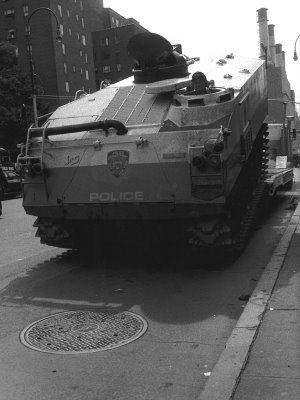 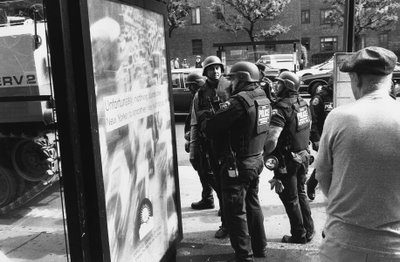 During the early 1990s the City of New York evicted some squatters from some buildings on 13th St. in the East Village . This action by the city included several hundred police officers ,some outfitted and armed as above , and several special vehicles including the 1950s era International Harvester armored personnel carrier also shown above . 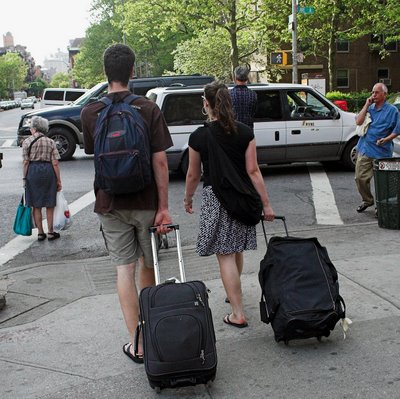 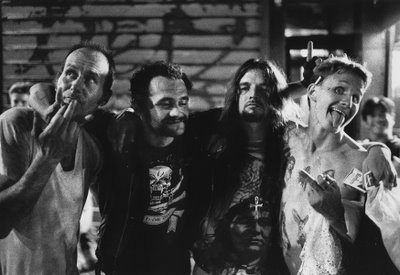 To this day the little patch of grungy concrete turf out front of Ray's Candystore has been a meeting ground for countless numbers of people from all over the world . I have had several aquaintances from places around the world come to Ray's whenever they were in town to see if Ray's candystore and those locals from the old neighborhood who frequent the candystore , including me , were still around . Of course I was and still am around ....and hope to be so for some time.

It shouldn't be at all surprising that per the example offered two posts ago , that guys who have just been released from jail or prison , would also return to their favorite location in the East Village hoping to reunite with old friends .

Considering that many arrests in the East Village are made during organized sweeps , many individuals go to jail together , spend time in jail together and because of similar sentances , get released at more-or-less the same times . Such was the case ( ten or so years ago ) of the individuals pictured above , a couple of whom having parted company a few days earlier at Rikers Island are seen in the midst of a reunion of old friends at Ray's Candystore. 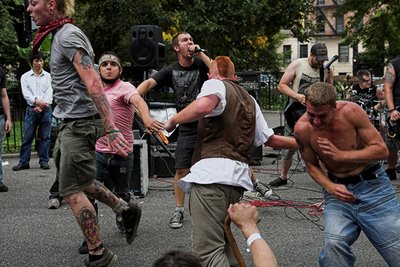 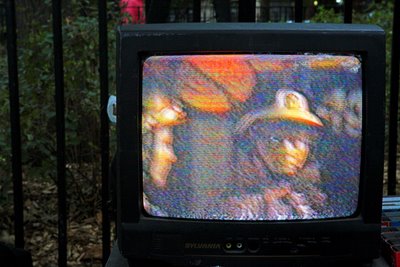 There was no "Howl" festival this year but there was a "Squatterfest" complete with a concert , though , this year the festival did not include wearing pentagrams and dancing on graves to hardcore , bathed in red light (see previous post "Howl no more") . The concert had been intended to be a much larger and impressive affair including bands with name recognition but something went wrong and the concert was almost canceled . Some local squatter impresarios put together a group of local bands and at least one out of town band ,"Inhaste" from Seatle , to save the day .

Not many attended the concert , perhaps as many as 150 people , and most of those that did attend were long time East Village squatters from the handful of remaining squats in the neighborhood .

Along with the music there was of course beer , some heavy duty slamdancing and much nostalgia for the old days complete with tapes being displayed of several of the infamous Tompkins Square Park riots .

Polite Society , A Cow and Two Guys Fresh Out of Jail 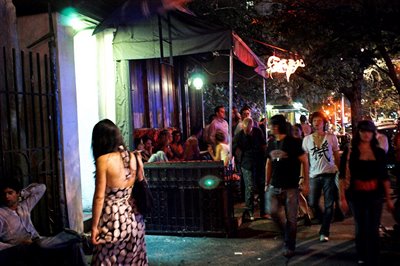 Above : A scene on avenue C Saturday night 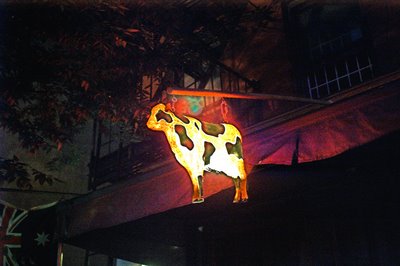 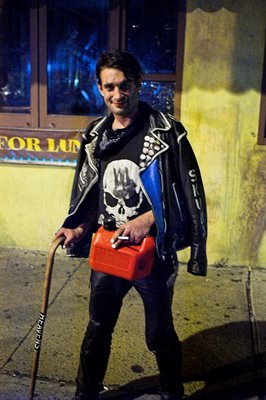 Above : Jewels holding a gasoline container and a cigarette ... and to what end ? 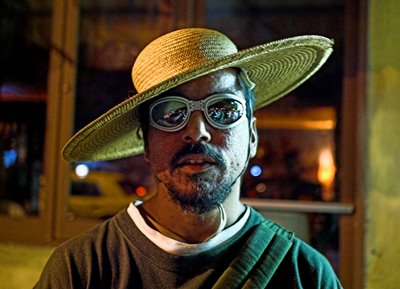 Above : Gesus Below : Jewels at Ray's 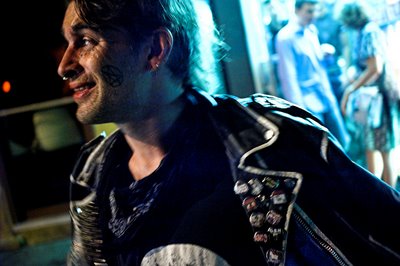 The pictures tell it all : there are still all kinds of things and people afoot and side-by-side in the East Village.