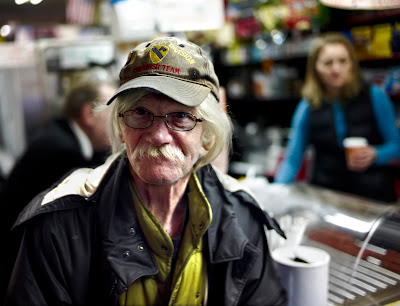 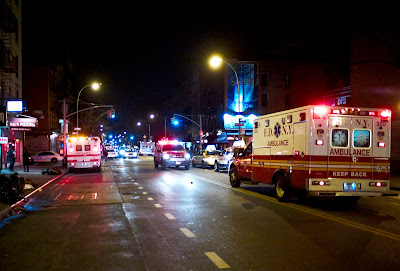 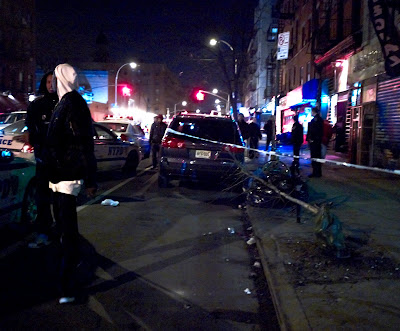 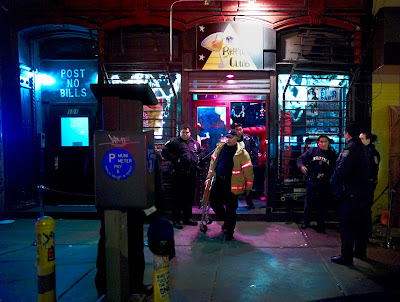 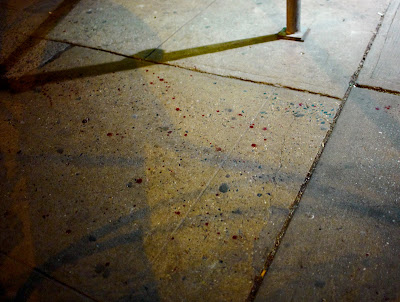 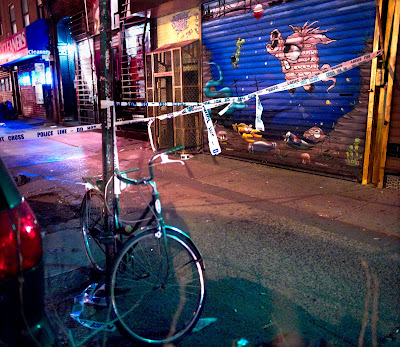 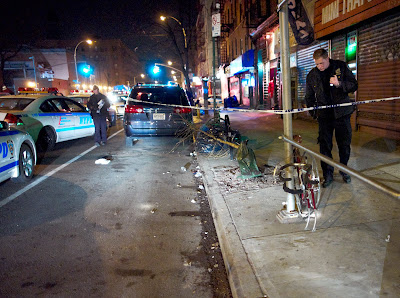 Blood was splattered early this morning on avenue A . Something went wrong inside the Pyramid Club around 1:30 Thursday morning and 2 males were stabbed .Witnesses said that colors were involved , that is gangs . Asymmetrically Blue did the stabbing and Red did the bleeding . The wounded were taken to hospital . We do not know their condition .
There was mention by witnesses of pipes and fire arms also . The new "Police Line-Do Not Cross" tape was used to cordon off areas where police were looking for evidence .Some officers were seen looking for spent cartridges .
Witness accounts differed as to whether fire arms were actually displayed and discharged . Two witnesses did claim though that when they were displayed the crowd on the street scattered with many leaving the scene .
For more:
http://abclocal.go.com/wabc/story?section=news/local&id=7218143
http://ny.eater.com/archives/2010/01/double_gangland_stabbings_rock_avenue_as_pyramid_club.php
P.S. : 7:50 PM Thursday 14 Jan. , 2010 . Concerning this morning's bloody event at the Pyramid Club.
Early this evening we spoke with another witness to the chaos in the street in front of the Pyramid Club . This witness affirms that while at the corner of 7th st. and avenue A he saw the large crowd in the street and that he also heard 4 or 5 gunshots . He claimed that as the shots were fired the large crowd dispersed . This is as 2 other witnesses described the same shots-fired event . This witness though was in a very different position located across avenue A from the 2 other witnesses .
While we were at the scene this morning police were looking for shell casings and as far as we could determine none were found . We saw no overturned paper cups marking the location of found cartridges .
If the weapon were as some say a"belly gun" or "wheel gun" , that is a revolver, there would be no casings on the ground to be found by police . Unlike an automatic or semi-automatic weapon such a weapon does not automatically eject spent casings .It retains the spent casings in the cylinder until removed by the operator of the weapon .
If the weapon were a small caliber fire arm such as a .22 or .25 , with only a small charge behind the round then the report might not be heard by every one . Certainly the report would not necessarily be heard at a distance on a busy street or in an apartment with the windows closed .
# posted by Bob Arihood @ 4:03 AM 11 Comments 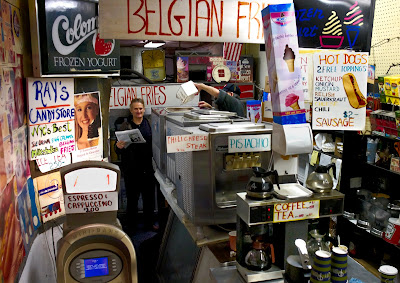 As the minute hand creeps up on midnight Ray fills one of his Taylor ice cream machines with the liquid that will shortly become his chocolate ice cream product . Earlier Ray had cleaned and sanitized the inner parts of the refrigerated mixer that actually mixes and cools the edible ice cream into existence . During the laborious cleaning task , Kevin , who was reading today's "Villager" editorial supporting Ray and his candy store , kept Ray company .
# posted by Bob Arihood @ 1:09 AM 5 Comments

Prices Go Up at Ray's Candy Store and Some Advice From Lilly and Slum Goddess Concerning How to Help Ray ... 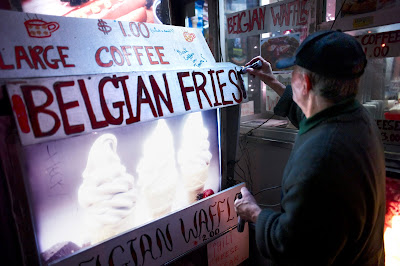 Ray was busy crossing out old prices and replacing them in desperation with new higher prices tonight hoping to increase his business revenues . The $2 fries will no longer be served at Ray's . Other prices rose too.
Ray claims that he met with his landlord and that the landlord was not very sympathetic . According to Ray the landlord has too many tenants not paying rent these days and that he expects Ray to pay his rent ....now. So it seems there will be no grace period for Ray and his candy store and thus the future is ever so uncertain .
Some have wanted to contribute to help pay Ray's rent . We have heard from Lilly who tells us that folks can go to a Facebook group titled "last ditch effort to save Ray's"to contribute to a PayPal account .
Slum Goddess also has some info on a contribution site here:
http://slumgoddess.blogspot.com/2010/01/help-save-rays-candy-store.html
There may be other sites besides these but we know nothing of them .
# posted by Bob Arihood @ 9:37 PM 1 Comments 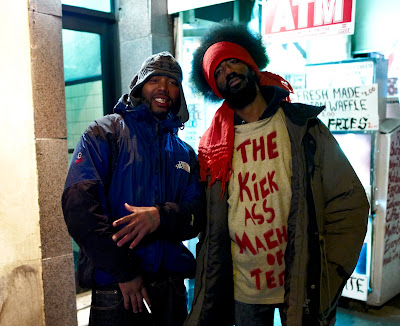 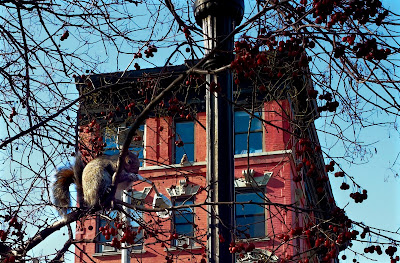 This Week End at Ray's Candy Store and Lucy's Bar ... 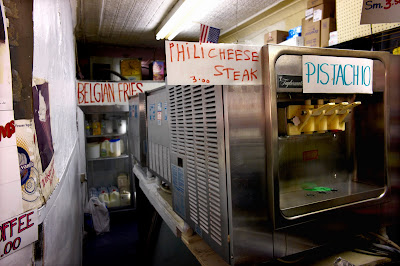 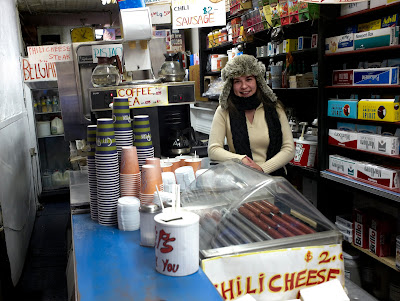 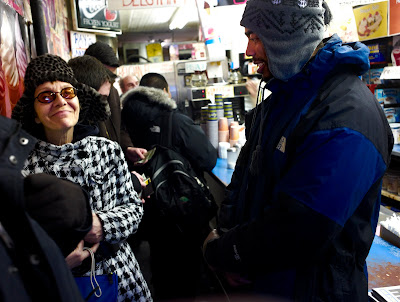 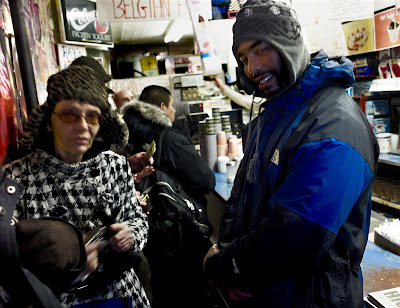 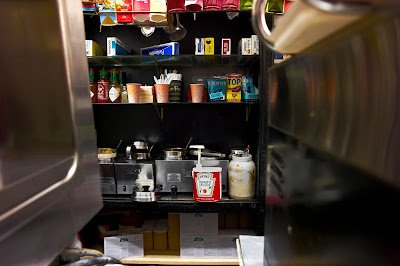 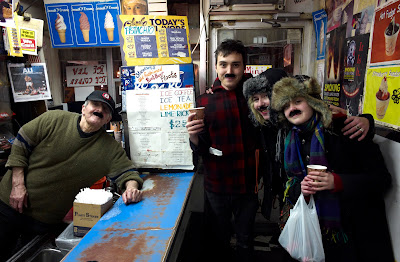 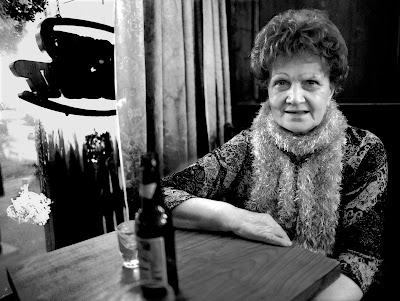 It was cold in the East Village this week end . With the door opening and closing frequently it was also cold inside Ray's Candy Store .
There were many friend's that visited Ray this week end , especially on Saturday . The neighborhood's more troublesome souls were there annoying Ray's customers too . There was some silliness . Ray was in better spirits than he has been in several days but neither Friday nor Saturday night produced much profit .
Ray was not able to meet with his landlord . He will continue to try to do so . Seventy six year old Ray hopes to be able to make a deal to continue at his candy store at least until he can secure his Social Security income and retire . All is still unresolved .
We visited Lucy at her bar on avenue A late Saturday night . Lucy was sitting at a table near the front door resting . Her leg hurt and her grand daughter who was tending the bar could easily handle the small crowd by herself so we sat and talked .
Over a beer and a shot and 2 very generous by-backs we talked about her business , the vacancies on avenue A and Ray's problems .Lucy's business is less profitable than it was last year at this time . This is also as it is for Ray and most of the other businesses on avenue A .She said that the week end crowds are smaller this year . She also noted that she was having serious problems with drug dealers that are attempting to sell not just outside her bar but inside as well .

Sunday Morning on Avenue A 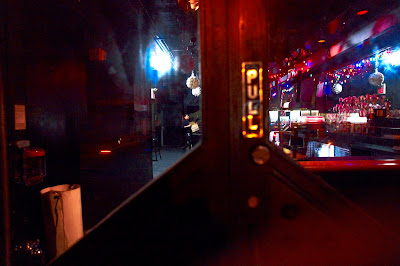