What Little Difference a Day Makes ... 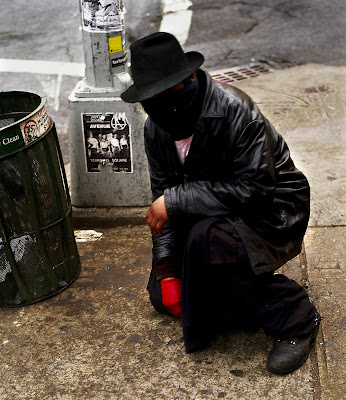 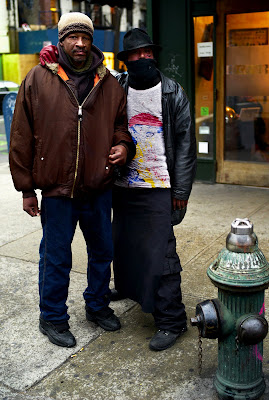 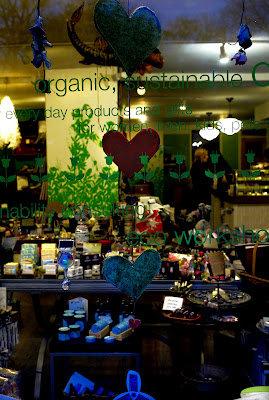 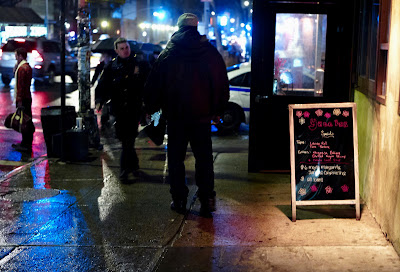 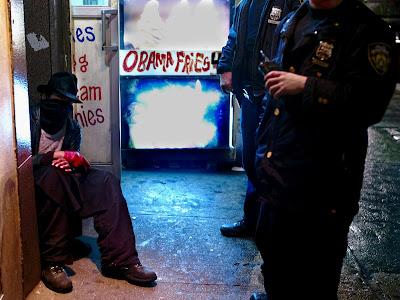 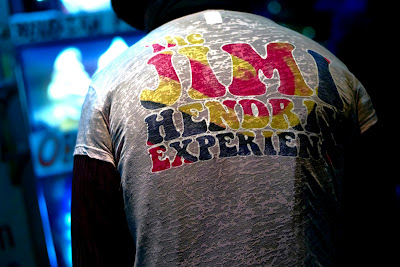 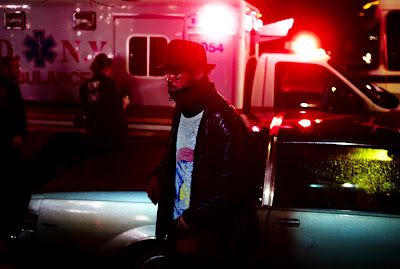 Folks living preciously , fashionably organic and sustainable with others assiduously drinking booze to stupor : avenue A on this day .
Cochise didn't seem to have profited much from a night sobering up in jail . Not surprisingly we encountered him today on avenue A with a cup in his hand and a beer in his pocket . No rehabilitation and recovery program for him with his last night's incarceration . G , after taking some heavy hits in a street fight last night and two nights ago enduring NYPD pepper spray , forcible restraint and the night in detox at a local hospital was drinking too.
Later in the day both were confronted by police . Cochise opted to pour out his beer and walk away , disappearing for the night . G , wearing his Jimi Hendrix shirt , took the "bus" that the police called for him back to detox . 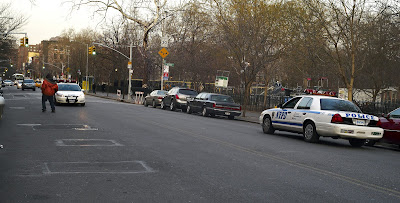 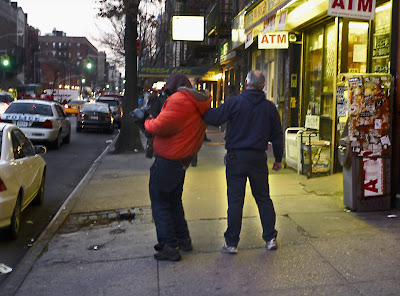 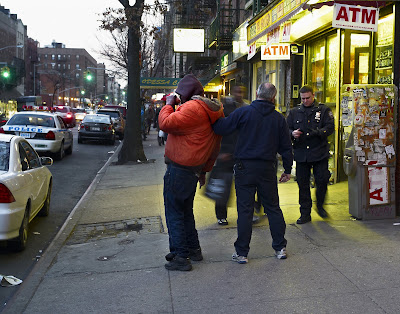 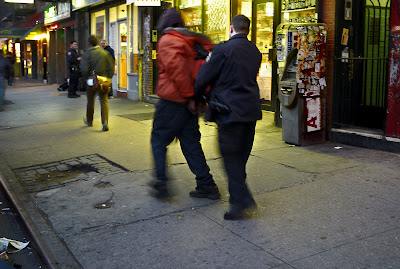 Very late this afternoon police took "Cochise" into custody , cuffed him and placed him in a waiting RMP on Avenue A between 7th street and St. Marks Place . "Cochise" , who in the past has often worn a head band with a feather , is also variously known as "Injun Joe" , "Chief" , "Lamp post Man" and Glenn Stevens . "Cochise" or rather Mr. Stevens was arrested this afternoon for public drunkenness .
Recently we have published posts concerning Mr. Stevens : pictures of Mr. Stevens in various states of inebriation . Mr. Stevens has been most commonly seen on avenue A drunk out his mind talking to mail boxes , lamp posts , trees , fences and invisible people among other things . He has also been known to pound on the windows of 7A restaurant/bar and Niagara Bar while jabbering and slobbering unintelligibly to the patrons inside . Many in the neighborhood can likely recall having to step over a sleeping Mr. Stevens at sometime in the past . Mr. Stevens has spent the last many years either on the street drunk out of his mind or sober in a jail cell . Mr. Stevens is in trouble and needs help , lots of help . Much more help than is provided by just another period of sober incarceration is needed . Of course on the streets of the East Village Mr. Stevens and his plight are not unique : he has considerable company .
For some time police attempted to communicate successfully with Mr. Stevens in Tompkins Square Park near the infamous chess tables . As this effort failed they followed him in the street . Mr. Stevens , traveling at a snails pace with his loaded pants riding very low , took 15 minutes to cross avenue A on his way from Tompkins Square Park to Nino's Pizza at the corner of avenue A and St. Marks Place . Mr. Stevens appeared to have purchased and eaten a slice of pizza at Nino's . Police easily took Mr. Stevens into custody at the pizza parlor and walked him down avenue A where Mr. Stevens poured and drank his last cup of beer before being cuffed and hauled away by police .
Today police at the scene of the arrest noted that the District Attorney's office is now attempting to put repeat offenders , such as Mr. Stevens , with substance abuse problems not just in a jail cell for a period of sobriety but also into more extensive , longer term rehabilitation programs than in the past before they are released . If this is all true , we certainly hope that it works well for Mr. Stevens .
# posted by Bob Arihood @ 8:43 PM 4 Comments

Seen of late at Ray's Candy Store : The Chip Butty 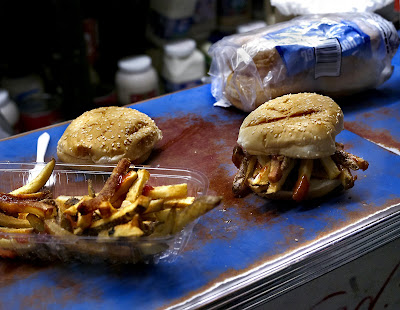 That's right it's a french fry--or if you prefer Obama fry--sandwich . You can put butter on the bread ; mayonaise or any sauce in fact on the fries ...even chili and cheese . If you are English or Irish you know of this delight . Especially good after football and half a dozen or so pints .
The chip butty has been seen at Ray's of late . Whats next ? ...Scotch eggs
# posted by Bob Arihood @ 2:42 AM 5 Comments 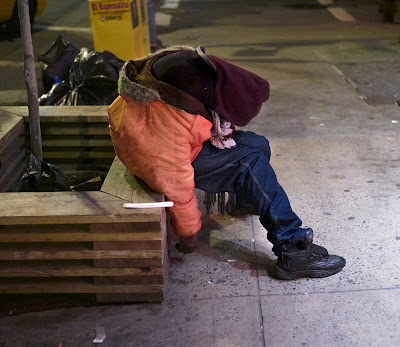 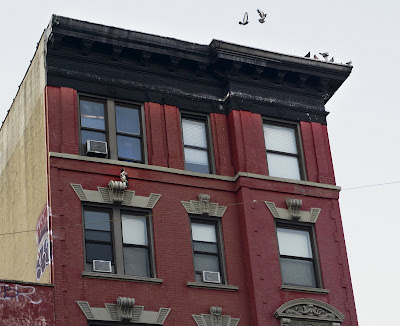 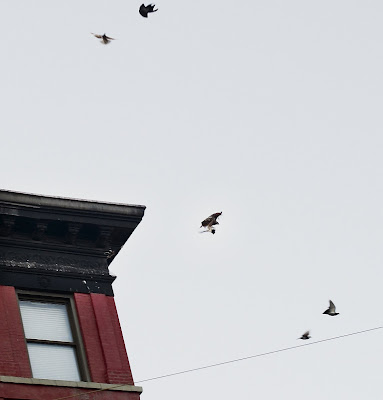 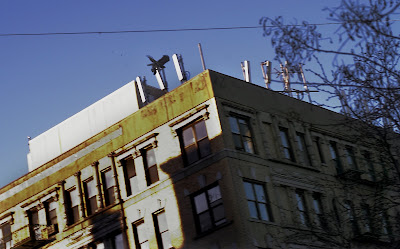 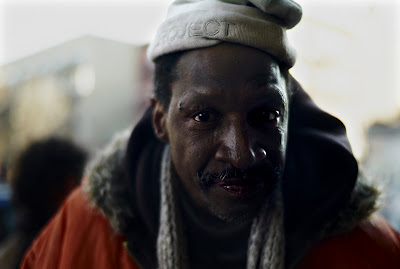 Avenue A Afternoon Tableau with Sparks Drinkers , Red Tailed Hawk and a Can and Bottle Gatherer 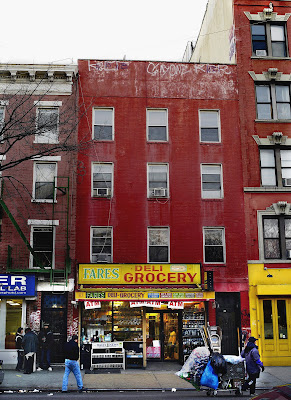 At the Corner of Avenue A and 4th Street 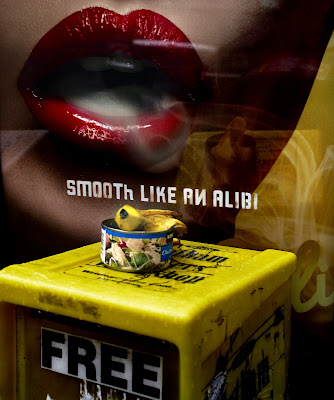 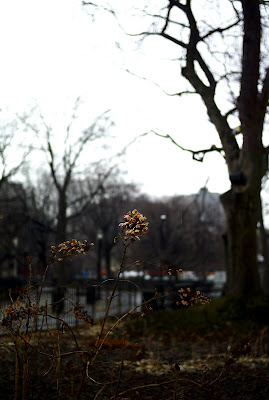 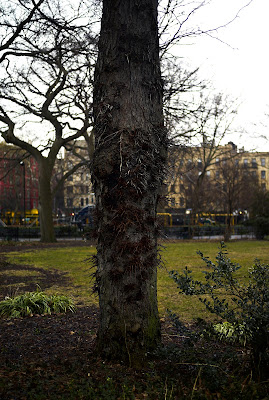 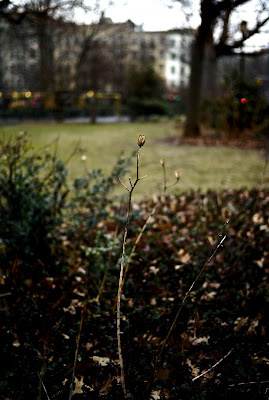 We apologize for the poor image reproduction that Blogger performs here at NMNL . Typically the little image is much too dark and the larger version of the image is much too light and low in contrast . Both images suffer a loss of color saturation too.
This is so because no matter what we send to Blogger , Blogger re-sizes and re-jpegs that image to make two images , a larger and a smaller image .During this process apparently Blogger uses a generalized "one-size-fits-all "type of algorithm to adjust value , contrast , color balance and saturation . This means that the carefully adjusted image that we see here on our calibrated monitor is not what Blogger presents to you on NMNL .
We attempt to optimize the image quality for the larger Blogger image , especially with nature scenes as here today . To do this we radically shift the contrast , value and color saturation of the image that we send to Blogger . This attempt to trick Blogger amounts to guessing at values and the result is hit-and-miss but sometimes we get a result for the larger Blogger image that is a bit closer to what we have on our monitor with the properly developed and adjusted original displayed. The down side of this attempt to trick Blogger is that the smaller front image is usually too dark and contrasty . Frustrating and disappointing results so often but not much more that we can do about this ...Blogger is what it is and it is free .
# posted by Bob Arihood @ 6:04 PM 1 Comments