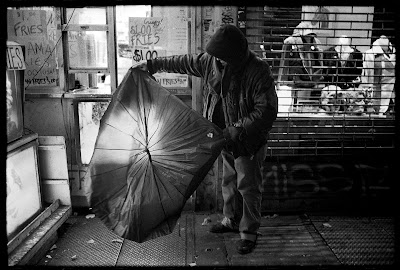 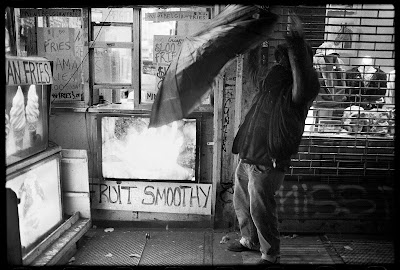 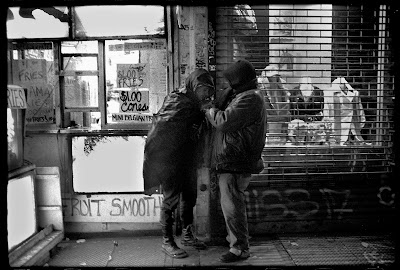 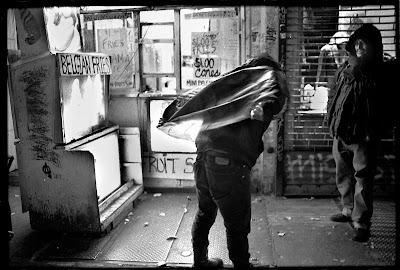 Jewels Was Drunk and Bored ... 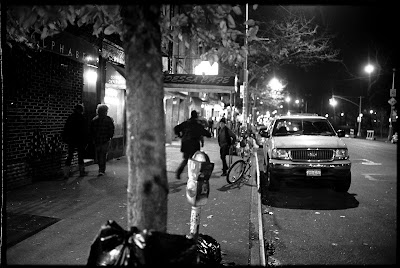 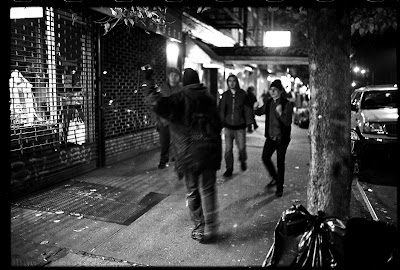 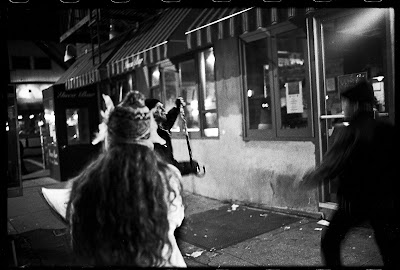 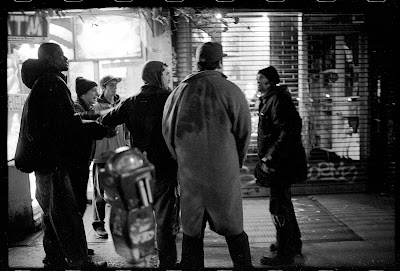 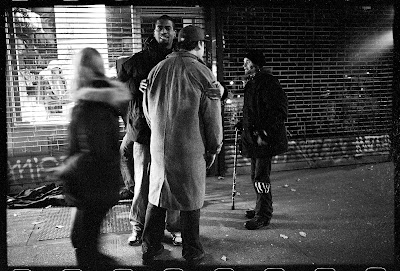 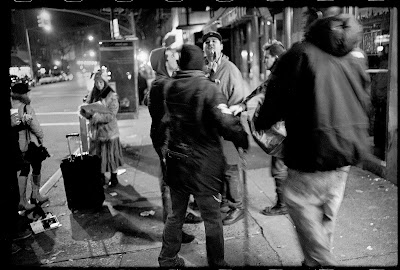 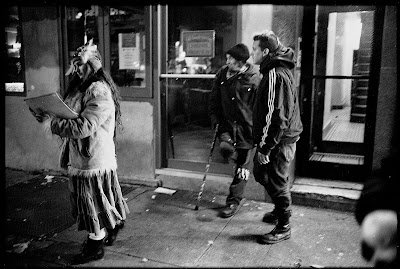 The evening's big drama began with the report from Jewels' cane as it struck with considerable violent force Ray's outdoor sign . We turned to watch and listen .
Screaming " you dissed the women" Jewels ran toward Odessa Cafe , cane aloft aggressively sweeping the air before it . His target of the evening , a short young man standing near the street in front of the cafe , appeared to take at least one blow from Jewels' cane . The women , Amy and Eden , never claimed to have been dissed and took little notice of all the commotion ; Jewels was just drunk and bored and was seeking some emotional stimulation . He certainly found it .
Shortly six liquored-up angry young men were in his face ready to give him what he seems to be so often seeking , a good beating . We kept an eye tuned for knives as the tension grew . The original target yelled out " I know you . I know you from Rikers . You were one of the dope-heads at Rikers ." One drunken "Crusty" stood with Jewels .
This evening began with Jewels and Amy at Ray's passing the time waiting to go to China Town for the bus that would take them on the first leg of their journey to Amy's home for Thanksgiving . Jewels was as usual drinking . Amy was drawing some portraits , among them one of her friend Eden . Throughout Jewels' emotional and possibly tragic drama Amy paid the tumult and turmoil no heed . Very focused on her task she continued to draw Eden's portrait . 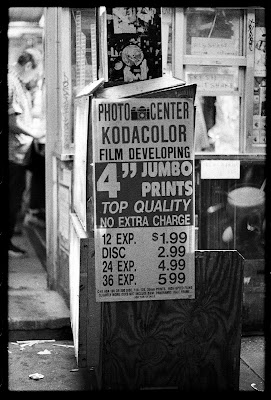 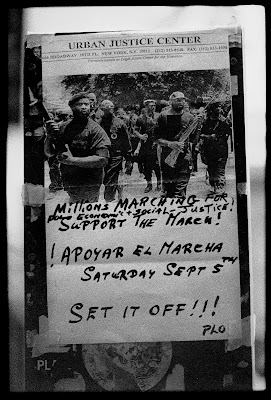 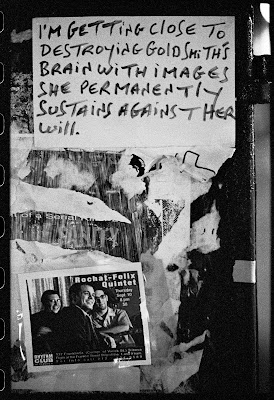 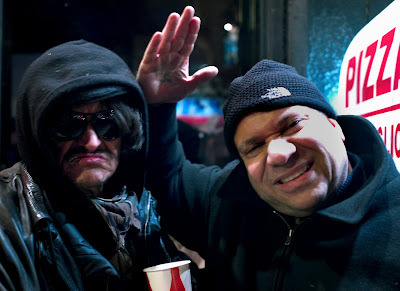 Romeo (L) and Mark at Niagara 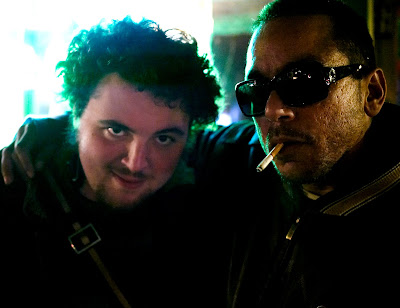 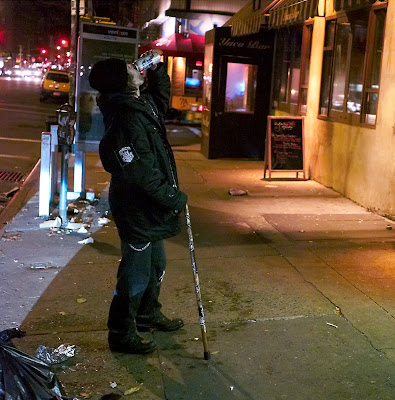 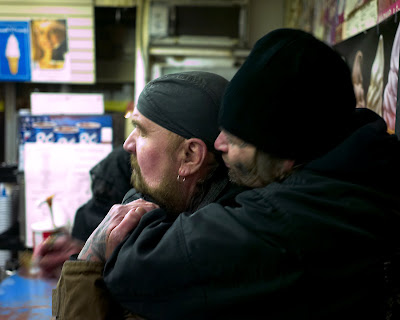 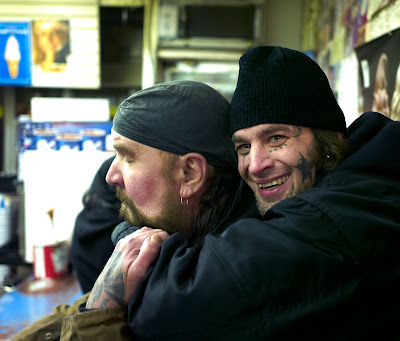 For a week now L.E.S. Jewels has been back on the street ; free for a while as he awaits trial and probably also sentencing . His usual alcohol induced aggressive confrontations with stranger and fellow alike all back at the fore on avenue A nights .
Last week Amy paid $500 to bail Jewels out of his lodgings at the Metropolitan Detention Complex , more commonly the "Tombs". For some of the time he has stayed with Amy at her dorm but he has also spent some nights on the street .
Two nights ago he was all hugs-and-kisses at Ray's kissing anyone that he could get his lips on . He made the mistake of placing large wet kisses on Biker Bill's cheek and neck . Bill broke the hugging embrace , pushed him away from his face and told him " you do that again and I'll hurt you real bad " .
Who knows how long this bail-out will work but for now ,with Jewels doing all the wrong things back on the street , things are back to normal on avenue A.
# posted by Bob Arihood @ 4:30 AM 8 Comments

A Cigarette for Shorty ... 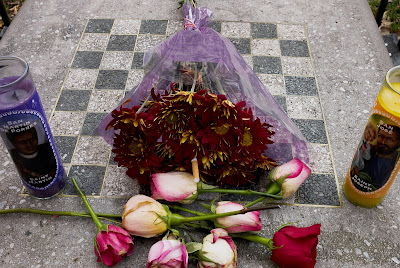 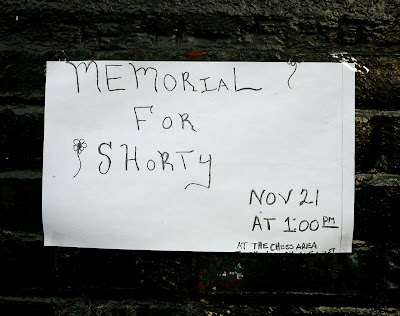 The parks department worker asked for a cigarette . A woman near her flipped open a green and white pack of menthols and pushed one out for the worker to take . She took the cigarette saying that " this one's for Shorty and if anyone takes it they answer to me " and placed it , carefully inserting it in the center of a bundle of flowers , in the major feature of the memorial for Shorty in Tompkins Square Park on this last cold November Friday afternoon .
Shorty , a TSP regular for many years , especially around the chess tables , died a week earlier reportedly of a heart attack at his home . We do not know his name , other than Shorty ; nor did anyone else that we talked to . We knew him for several years though not well . We do not know his age . We have no picture of him to display ; if we find one we will insert it in this post .
The wind repeatedly extinguished the memorial candles on this sunny bright and cold afternoon as a group of mourners of perhaps two dozen stood recounting short remembrances of Shorty . The mourners were later lead in a prayer by members of one of the Christian charities that provides free food and clothing regularly in TSP .
After the prayer we talked some with those who had known Shorty and then left the park .
An hour or so later we returned to TSP to watch one of the Red Tailed Hawks hunting . As we passed by the memorial at the chess tables we noticed that someone had taken the cigarette .
# posted by Bob Arihood @ 3:20 AM 4 Comments 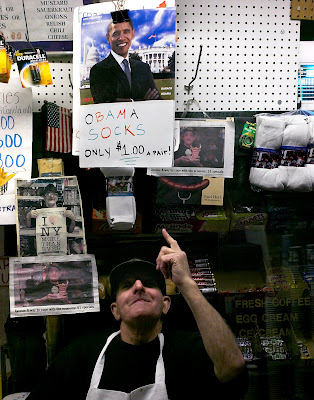