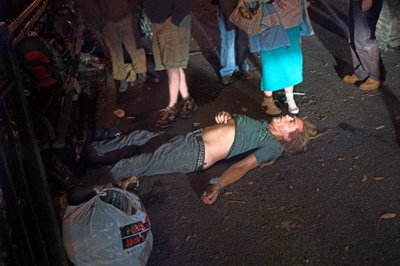 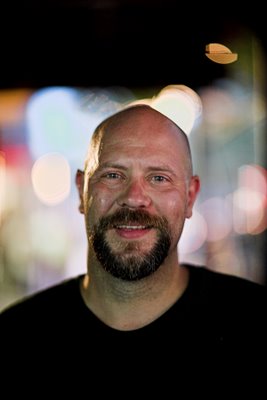 The young man in the top picture which was taken in Tompkins Square Park tonight was lucky ; someone in the surrounding crowd injected him with a version of naloxone ,the heroin blocking agent , and saved his life . He was removed to a hospital for further attention and care .

Bobby wasn't so lucky with heroin , he lay too long unconscious in a restaurant restroom before help came . Now Bobby is at Beth Israel hospital in a bed on life support . I am told by some who have visited him that the life support will soon be removed . 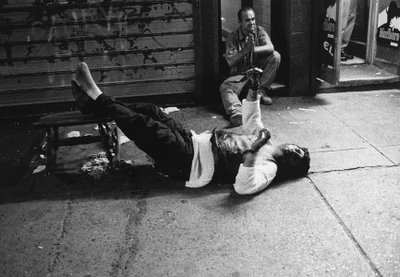 Some glue and a joint will get you there . 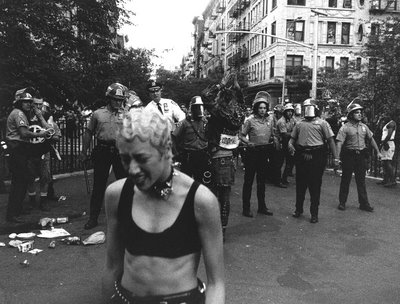 One Labor Day ,perhaps ten years ago , punks from around the world headed to Brooklyn to drink , as dedicated bachants do , mass quantities of beer at the Beer Oympics . When they descended on the site in Brooklyn where the event was to occur they were denied access to the property and the Olympic scale beer blast was tempoarily delayed . Frustrated , angry and only insufficiently drunk the horde turned west to lower Manhattan and Tompkins Square Park.

As the punks moved from east to west through the park drinking , a raucous party ensued ,puzzling most of the neighborhood park users on this holiday afternoon . For a while to the delight of most it seemed that the Beer Olympics had sucessfully found an impromptu home in Tompkins Square Park . Such was not the case .

Shortly the cops came and a minor riot ensued which spread out of the park into avenue A where many were arrested . After perhaps half an hour it was all over . The riot was suppressed and the Beer Olympics never achieved the hoped for Olympic proportions imagined by its only partly drunken and dissapointed participants . 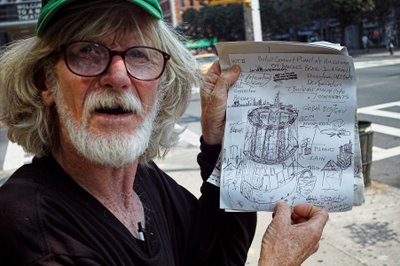 Jim participated in the construction of the towers at the World Trade center back in the '70 s of the last century as a member of the International Brotherhood of Carpenters and Joiners . Jim was a carpenter , mostly doing form work for concrete . He remembers watching the towers going up and he remembers watching them coming down on 11 September 2001 .... he videoed the latter. He feels a strong primal connection to the old twin towers .

When I spoke with Jim this morning at the "Village Pour House " , where he was working on a mosaic , he told me that he had been up all night thinking about the new "Freedom Tower " and that he was very dissapointed with the new tower . Thinking about it disturbed and angered him so much that he could not sleep . To pass the late night hours he reiterated his design for the tower , a tower design that I had noted in an earlier post .

The tower of Mosaic Man is round at it's base and continues round up to it's mid-height where a light rail train will travel around the upper-most floor of the round lower building , from base to base of each of it's seven towers which sit on this round lower half at the 50th floor . Built on this round lower half of the building are 7 towers , one for each continent ,manifesting the idea that this is a "WORLD " trade center . The towers are connected near their tops by bridges which provide a structural connection that strengthens and also affords easy passage from tower to tower at the upper levels . Since the design suggests a round and crenelated tower I asked Jim if his tower would be constructed to serve as a battlement to endure another attack from the skies .His answer was that "they won't try that again ...they will just lease the building and do the job from the inside " .

The interior is a large open round cylindrical space with light and air which would afford a tremendous view for all , in all 7 towers . A large garden ,even a small forest , will occupy the lower end of this hollow interior space . It is not completely clear to me from the sketch , but it may be that one of the towers will be centrally placed with-in this open interior leaving only 6 towers to be placed on the lower circular base of the building . .

The Fire Dept. will have a station at the central peak of the structure and a large volume of water will be stored there for use in case of a fire in the complex .

The sketch in Jim's hand , he assured me can be built . At the time of the photo he was calculating just how much concrete would be required and how to bring the materials most effeciently to the site by barge on the Hudson River . He was also considering how to supply the aggregate and steel and where to burn the cement stone .

Jim has been working on another idea concerning the memorial . It involves having the children of America and the world send pieces of materials suitable for mosaics to the memorial site where he will build a defining memorial structure using these submitted materials and possibly thousands of clay pieces glazed with significant images ,words or even faces of those that perished at the site as tessarae.

Who needs architects and designers ? Jim's design , at least as a concept , can give Messrs. Liebeskind and Childs and Sir Norman a run for the money any day of the week .Turn the project over to the people , whose tower and memorial it is in the first place ,and lets get something worthy built . 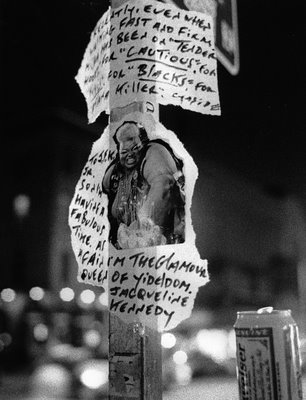 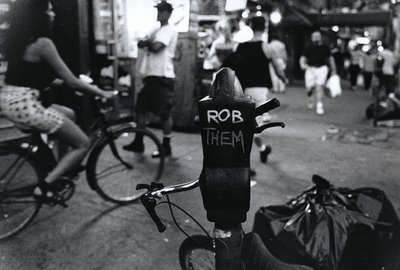 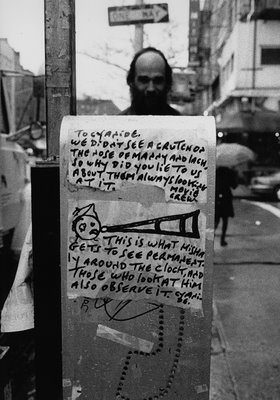 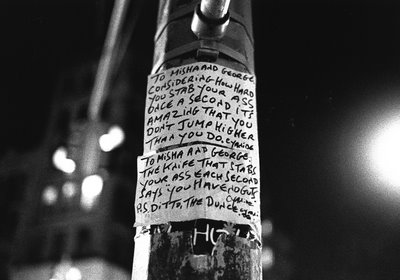 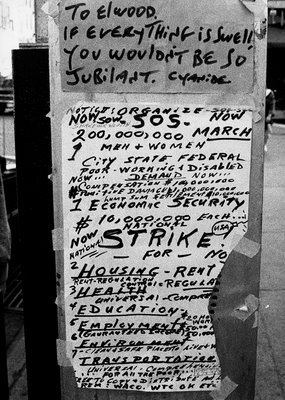 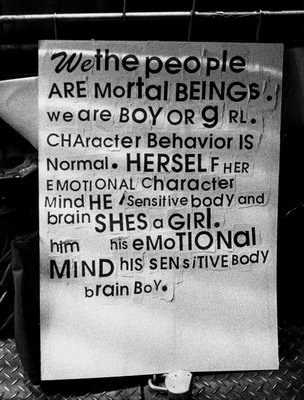 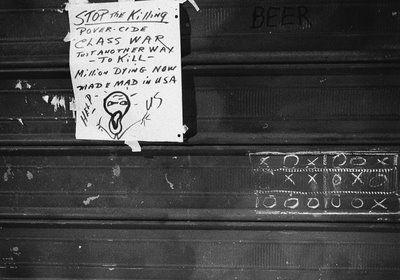 Stanley and Ilya at Continental 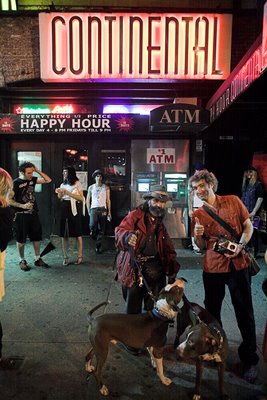 Last night was the last night for live music at Continental and Stanley ( "Cowboy" to some ) and Ilya were there . For details click below . 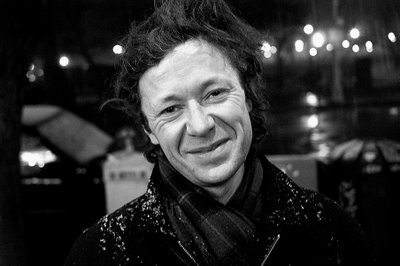 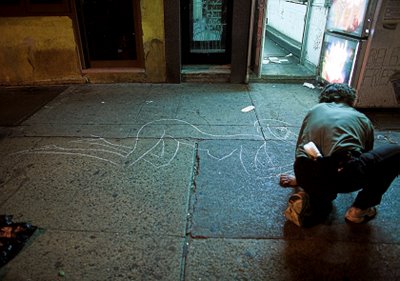 Max and I both spent a good bit of time on avenue A and we were both part of the same little crowd of people that gathered routinely at and around Ray's Candystore . Max was a quiet person and never talked much ,at least with me , but I did learn over time that he was an artist ,that he was Russian and had spent several years studying art at one of the most prestigious art schools in all of Russia . Occasionally Max drew with chalk on the sidewalk as above at Ray's . I can not say much about Max because I never really knew him , not even his last name . Our paths crossed often for years but not much was ever said at those encounters . My fault as much as anyone's this all to common human failing . Max is now gone from the community.

Last week Max died of injuries suffered in a fall from a building onto the sidewalk somewhere ,I have been told , along 7th Street between avenue A and first avenue .

Just So We All Remember.... 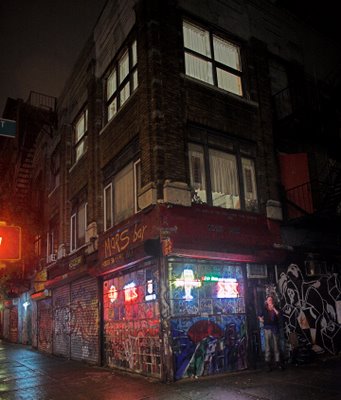 Another view of Mars Bar to help remind that much of what we know as our downtown neighborhood , including both good and bad , is disappearing . The Continental will end tomorrow night , at least as a music venue , and CBGB will be gone for good as of October 15 of this year. These places once loomed large on the scene and were then , already , as now legendary institutions . I know that all things change as time passes and that what was important and popular once-upon-a-time , often becomes less so with time's passing . My question today is , what is the value of those new things that replace these old shapes and forms with their legendary pasts and still possible futures , and whom do they serve?