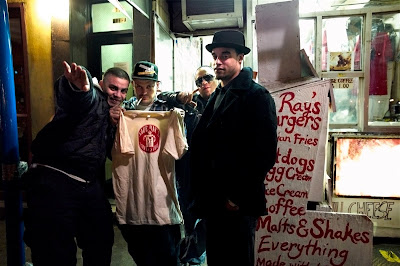 Satisfy that commodity fetish addiction--and help Ray too--by purchasing cool "Save Ray's" paraphernalia at Ray's Candy Store ,113 Avenue A in the East Village and at :
www.cafepress.com/SaveRays
# posted by Bob Arihood @ 4:55 AM 3 Comments

When Ray Sold Newspapers and Magazines and Made a Profit Too 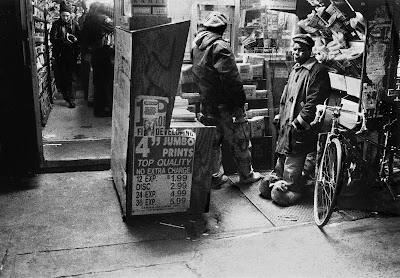 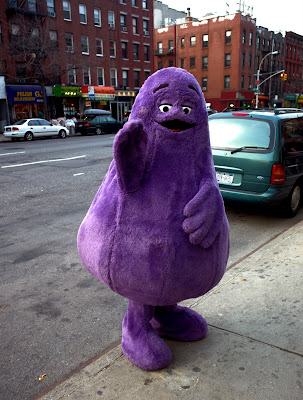 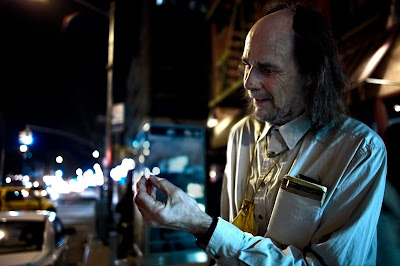 Lawrence liberated this quartz crystal from a nested mass of crystals so that it could breathe , so that it could vibrate freely . He has more than a hundred crystals . Some are not really quartz though . He says that he was fooled by someone hustling just plain glass fakes .
Several of his crystals have holes in them . The holes don't harm the crystals though and some are strung on a string as a necklace .
# posted by Bob Arihood @ 5:02 AM 0 Comments 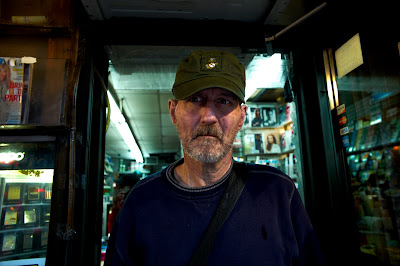 Monday Afternoon on Avenue A Near 7th Street 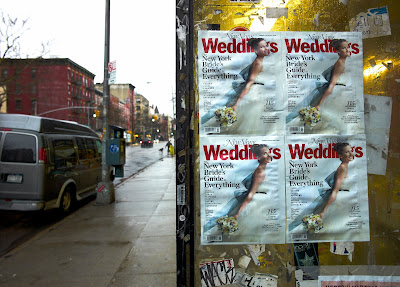 Sunday Morning Brawl on Avenue A and 7th Street .... 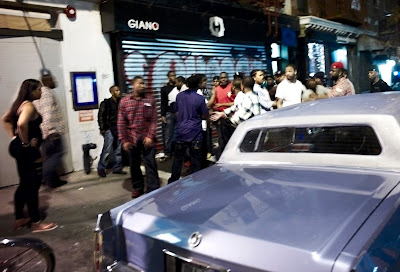 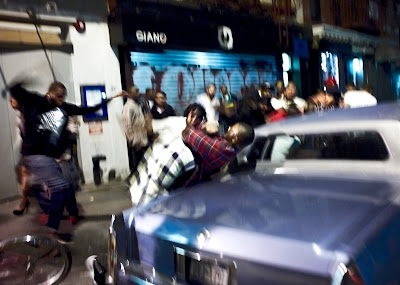 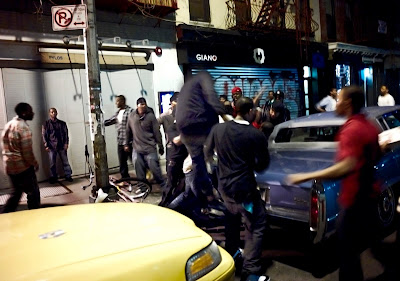 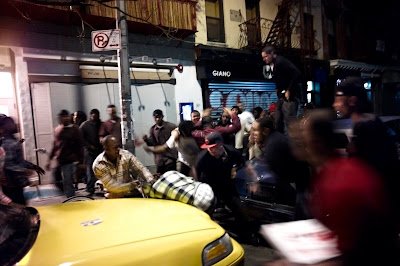 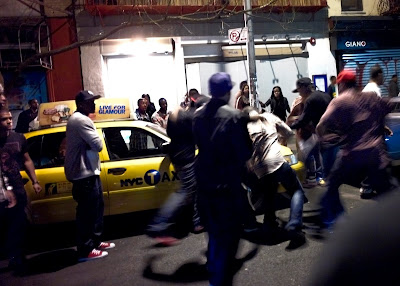 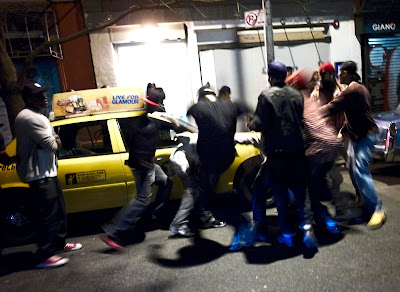 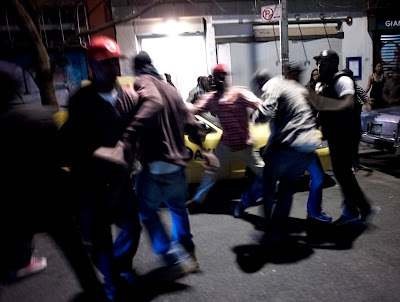 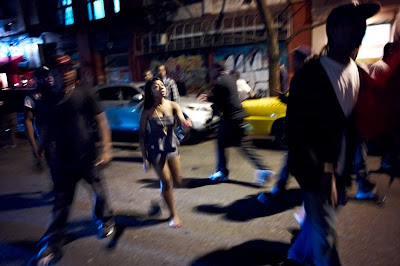 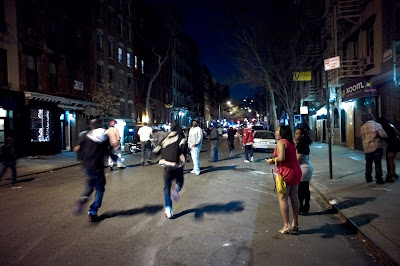 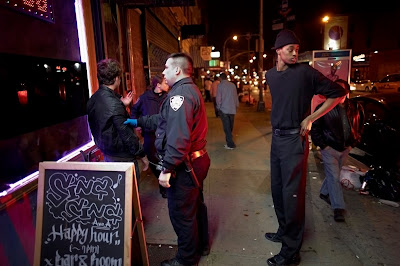 Something went wrong on Avenue A early Sunday morning .Somewhere between 5th street and 7th street a brawl had started . A crowd of perhaps 50 people was noisily battling it's way up avenue A . Sometime around 3:45 Sunday morning , as we walked south on avenue A , we were surrounded by this crowd of brawlers at the corner of 7th street and avenue A .
We had no idea what had started this strange chaotic and violent event but as some of this crowd of brawlers turned west on 7th street we followed . The picture sequence shown here is from one of the last of the violent skirmishes of the larger event . The location of these images is the middle of the 7th street block between avenue A and 1st avenue. We did not witness the earlier events along avenue A .
This event that we witnessed was very violent . People were not just beaten , some were stomped and kicked too . Some around us in the street where we were standing were quite actively attempting to prevent us from photographing . As can be seen from the blurs in some images , photography is sometimes a contact sport .
About the time that the pictured skirmish ended and folks were running away west on 7th street the police arrived .
Only one car with 2 officers managed to get to avenue A .We later found these officers attending to a male with a bloodied face in front of Sing Sing at 5th street and avenue A . This male was placed in an ambulance .
When we advised that there were still simmering minor conflicts around the corner on 6th street their response was that they were the only unit available . Such is frequently the case on a week end night that there is a backlog of half a dozen or so calls with all on-duty NYPD units engaged . 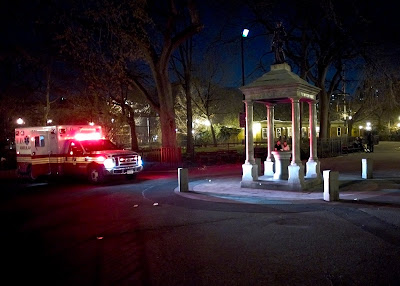 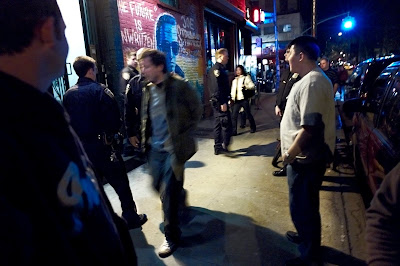 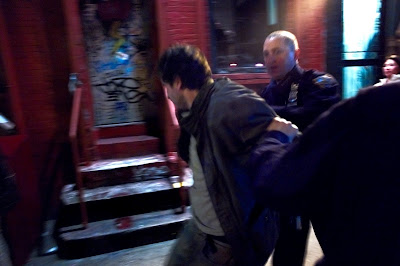 Friday night a little after midnight several police cars arrived with perhaps a dozen officers at 132 E. 7th street . We were told at the time that a burglary was in progress on the 4th floor above Niagara Bar . Officers entered the building at the door right next to the large painting of Joe Strummer , climbed 4 flights of stairs and found not a burglar but a drunken trespasser . The male intruder was taken into custody , put in a patrol car and taken away.

Recently NYPD has given special attention to burglaries . Burglaries are one kind of crime that has been on the rise in the East Village . This night the 9th precinct made an extra effort to catch a burglar but caught instead a trespasser .