Haley and Lilly at the End of a Successful "Day of Ray" at Sidewalk Cafe : $1300 Raised for Ray! 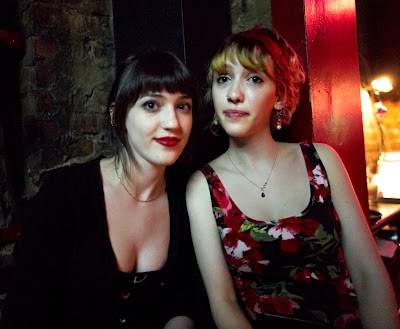 Save Ray's ! Saturday , February 6 Noon to 6 PM at Sidewalk Cafe , 6th Street and Avenue A 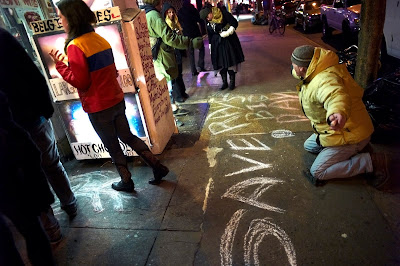 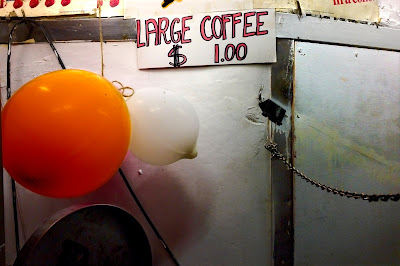 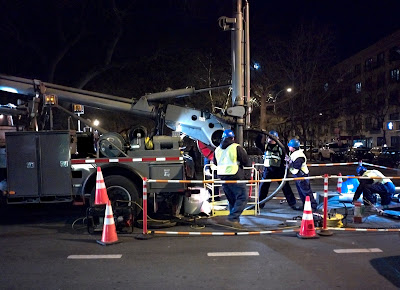 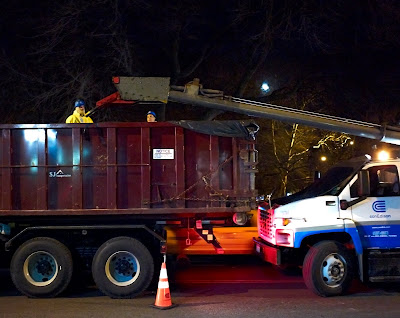 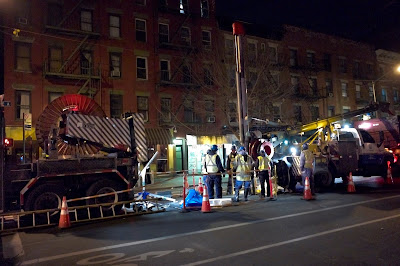 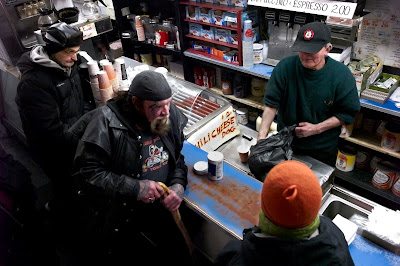 Thursday night Con Edison was at work out front of Ray's Candy Store .Using an assemblage of hardware suggesting a harvesting machine fancifully melded with a serious set of chomping steel mouth parts and a drilling rig , the work crew pulled an old 3 inch cable from a conduit below avenue A and chopped it into foot long pieces . The chopped cable pieces , mostly copper , were dumped into a large container on the bed of a heavy truck to be hauled away and sold as scrap . This copper scrap to be melted down and recycled .
Inside Ray's store , Ray was busy packing Belgian fries for a customer and telling his friends that would listen a sharks tale .
Ray claimed that while serving as a boiler fireman 3rd class in the Turkish Navy he often caught and ate shark . In the bowls of his ancient retired British navy destroyer that had been passed on to the Turkish navy , down in the boiler room everything was hot . Ray said that many things were in fact too hot to touch . A sailor had to be careful ; thoughtful and deliberate in his moves in this little boiler room world or he could be cooked . It was hot and Ray used that heat at times to cook fish .
Ray told his listeners of how before he went on duty he often left a line and baited hook over the side trolling. Later when he had some time free he went to check the line .Ray and a sailor with an ax pulled the line up the side of the ship . When a sizable fish , usually a shark , was pulled on deck the sailor with the ax severed with a blow from his primitive but sharp edged tool the head , with it's large mouth and sharp teeth , from the silver gray fishy torso .Care was necessary ; the shark could chomp on the incautious right there on the deck and wiggle free with a mouthful of sailor , overboard , returning to it's briny world .
The headless shark was taken below to the boiler room . Somehow , Ray wasn't clear about this , the shark was placed in or near the white hot heat of the boiler's firebox . In 10 seconds the fish was removed . The outside was charred black , the deep interior , the guts , was cold and inedible but the fleshy part in between was perfect for consumption .
All as told by Ray on Thursday night in his candy store. 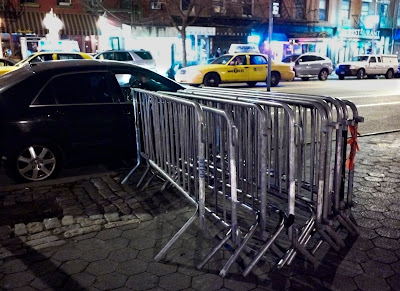 An NYPD stake truck unloaded these barricades this afternoon .
# posted by Bob Arihood @ 4:03 AM 2 Comments 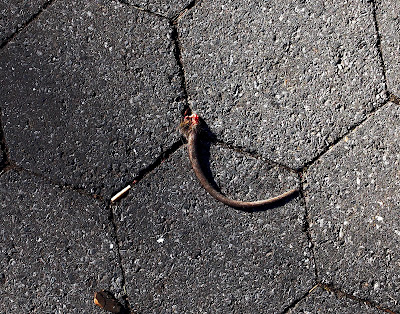 What with all the Hawks rapaciously consuming rodents in the trees of Tompkins Square Park , there's bound to be a few left-over body parts strewn about .
# posted by Bob Arihood @ 3:47 AM 5 Comments

Ray and Marlene in Better Times ... 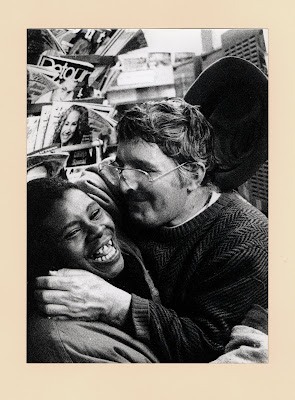 Marlene (a.k.a. Hot Dog) is doing time on Rikers Island . She should be back on the street at the end of April . Ray is as most know facing eviction from his candy store on avenue A . 77 year old Ray has no pension nor has he as yet secured his Social Security benefits .
The picture above is from a better time when Ray and Marlene were friends . A short time later Marlene--laughing hysterically with a 40 ounce Budweiser in hand--slammed the steel bulkhead doors on Ray's head as he was coming up from his basement .
For this senseless drunken deed Marlene spent 3 years upstate in prison . Seriously injured Ray refused a trip to the hospital fearing what might happen to his candy store in his absence . According to the medical technicians that treated Ray that night , Ray came very close to dying in his candy store . Ray's coordination hasn't been the same since .
Ray and Marlene are no longer friends.
# posted by Bob Arihood @ 11:14 AM 14 Comments 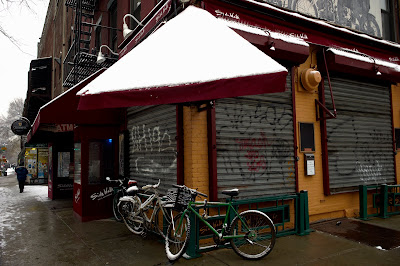 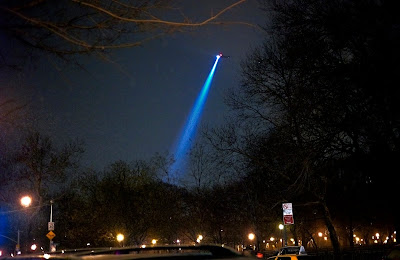 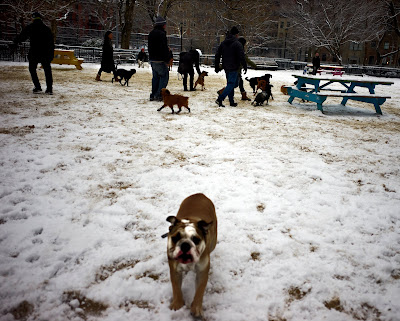 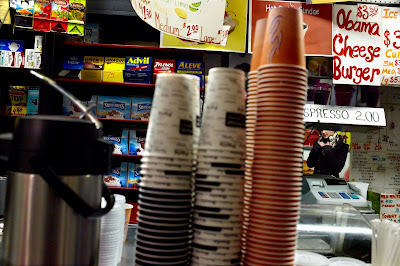 Tuesday morning Ray will pay both his January commercial rent and his January residential rent .There are now of course the February rents due .
Remember the "Day of Ray" coming this Saturday February 6 with an afternoon concert at Sidewalk Cafe from noon to 6PM . There may be some extra surprise events at other locations on this "Day of Ray" too.
Go to Ray's Facebook group "Save Ray's" for other breaking news .
# posted by Bob Arihood @ 11:37 PM 2 Comments 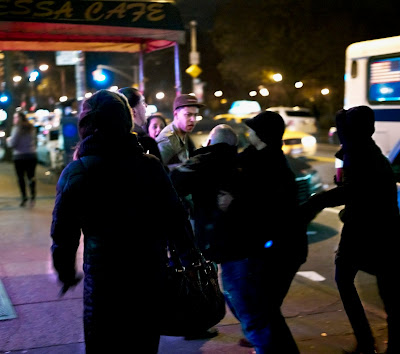 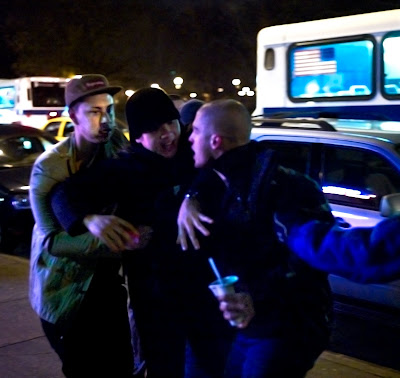 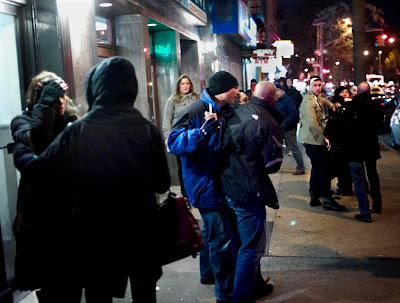 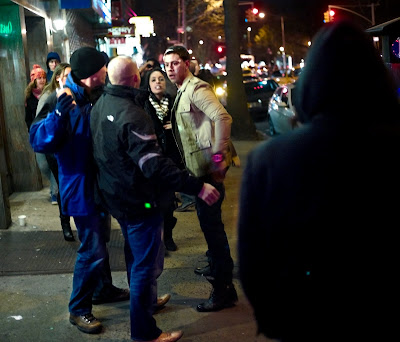 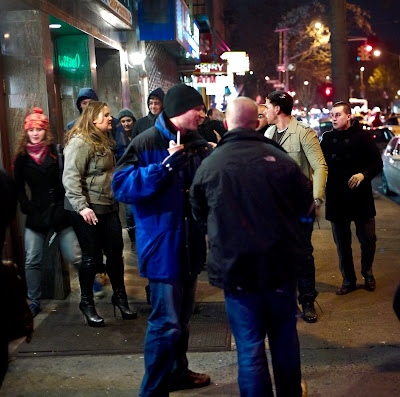 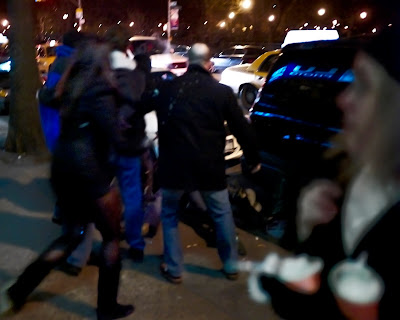 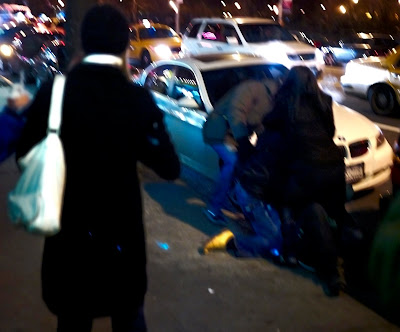 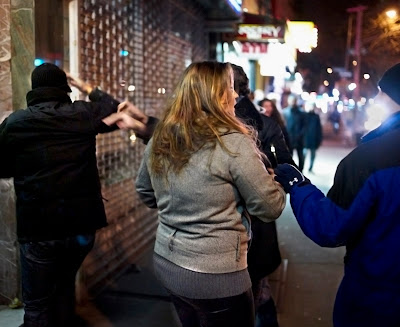 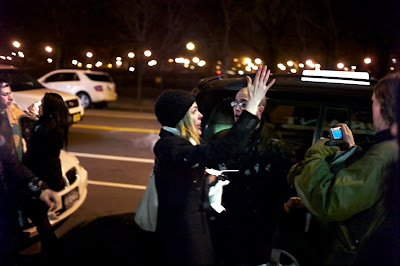 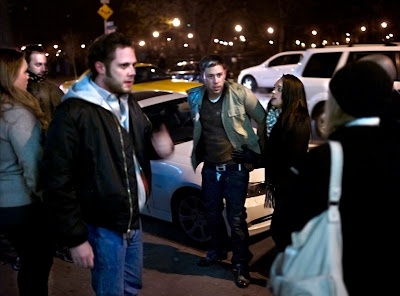 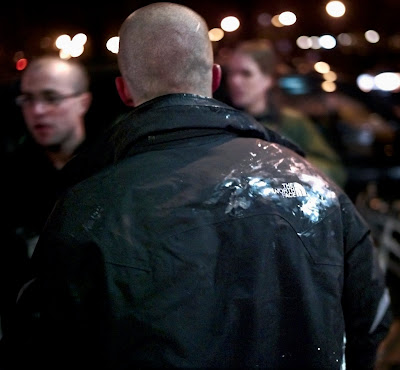 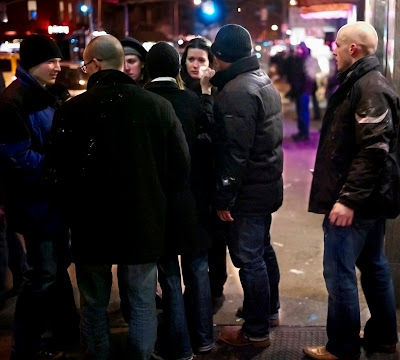 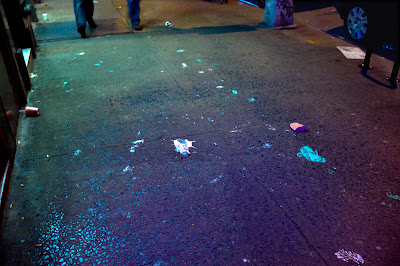 For all the 5 minutes of shrill fuss not much damage was done . There was some grappling and a roll in the gutter . But we didn't see one good punch land squarely anywhere that counted . Though they all scuffled on the infamous avenue A sidewalk-a venue with a long history of hard core battlers fighting with knives and guns-no one in these 2 groups seemed to know much about fighting .This night the weapon of choice was Ray's ice cream .
We were told that unpleasant words had passed lips over Belgian fries in Ray's . Then a bit later outside on the sidewalk more was said . Someone called someone "faggot". This we heard . A bellicose female charged first and several others were to follow .
As far as we know no worse than bruised egos and hurt feelings was the result of this minor avenue A donnybrook ...and perhaps the dry cleaners bill to remove all the smeared Ray's ice cream. Later someone had to clean the sidewalk too .