We already knew that this would be an expensive beast to design and build .But according to 21 Elephants the price tag is a whopping $116,000,000 :
http://21elephants.com/
In these new financially uncertain times we have to ask how will Cooper Union afford not just to pay to build this building but also to maintain ( finance as well as maintenance) this very complicated , technology laden building into the future . Will this small private college with a very small student population receive the necessary funding in government grants , private and corporate donations or endowments ? And as Behemoth who " eateth grass as the ox ", will this precious boutique academic institution of necessity turn to graze on more of the East Village neighborhood to create a greater real estate revenue base to support what it has already built ?
# posted by Bob Arihood @ 9:35 PM 1 Comments 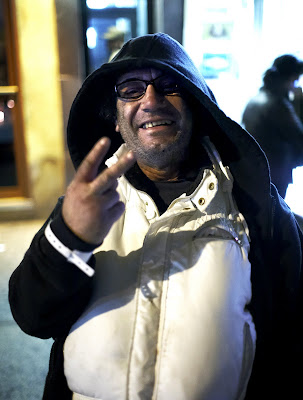 John will be separated from Marlene for a while . Marlene(a.k.a. Hot Dog) was taken into custody by police 30 October 2009 .This was her 3rd arrest in a very short period of time . She had just been released from Rikers a week or so before this most recent arrest .
According to publicly available records ,Marlene is to be in criminal court on 10 December 2009 to answer to 1 misdemeanor , interfering with governmental administration , and 1 violation , harassment with physical contact . She is currently incarcerated in the Rose M. Singer Center on Rikers Island .Her bail has been set at $1500.
# posted by Bob Arihood @ 2:14 AM 0 Comments

What Happens When You Spend Lots of Money at Odessa Bar ? 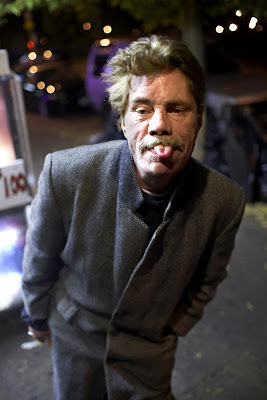 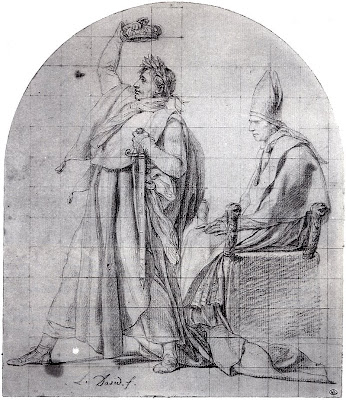 The Emperor Napoleon Crowns Himself by Jacques-Louis David


Nearly seven score and six years ago President Lincoln closed his address at Gettysburg with these words : ... and that government of the people , by the people and for the people shall not perish from the earth.

It's up to us folks , not plutocrat Mike Bloomberg and his billions , to see that such governance prevails .

Halloween and Early All Saints Day on Avenue A ... 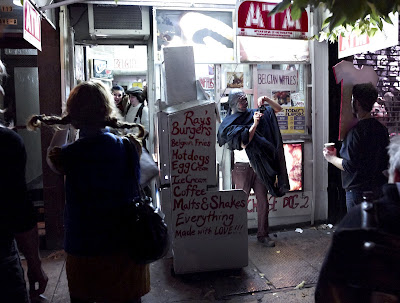 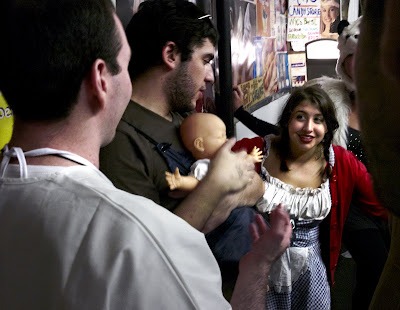 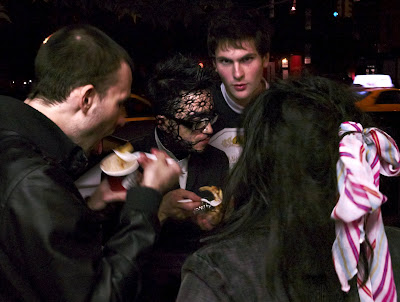 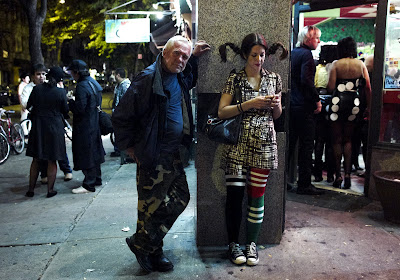 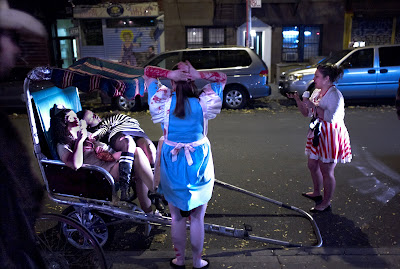 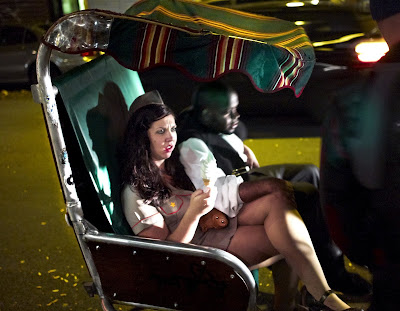 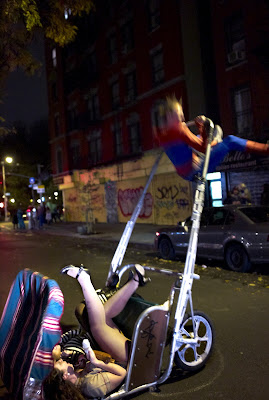 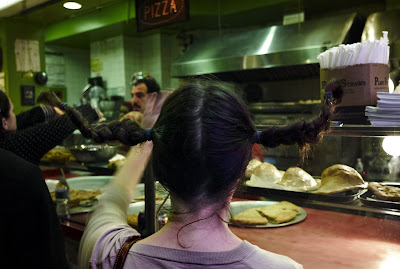 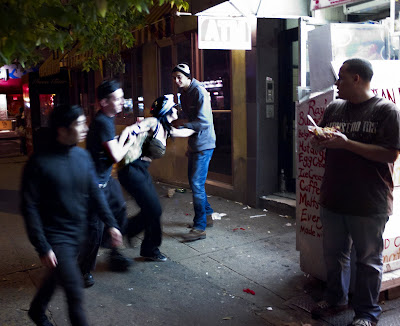 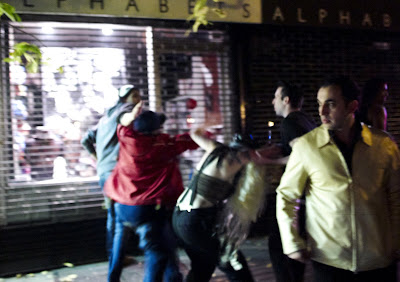 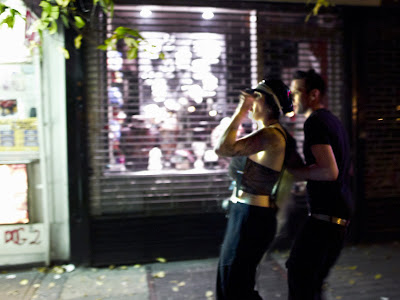 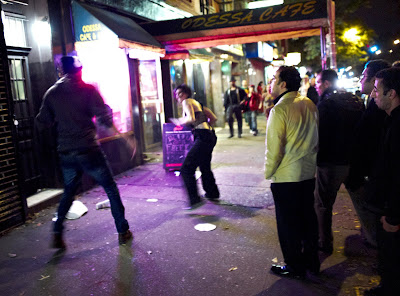 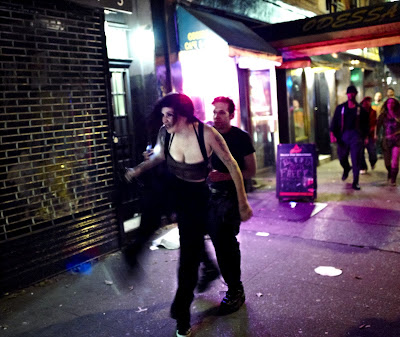 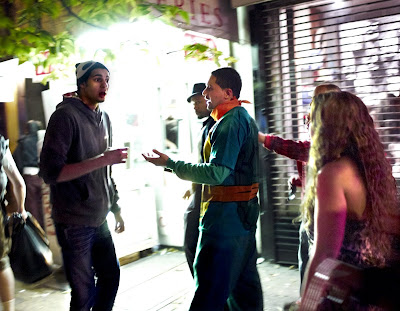 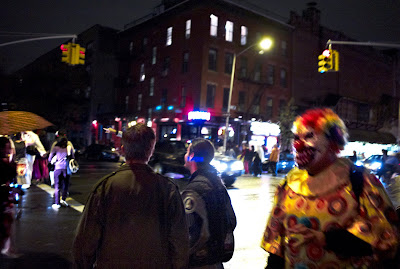 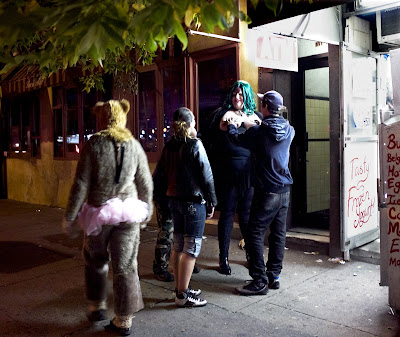 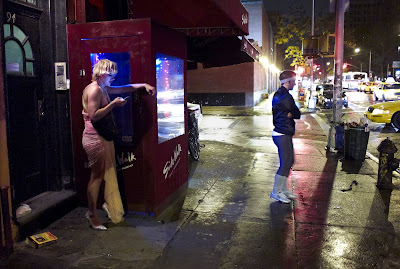 Gravity defying braids were popular .We saw the Longstocking braids up and down avenue A .Spidey was there thrilling the ladies with his rickshaw acrobatics .Ray's Candy Store was busy all night as were all the bars and clubs . It seemed that everything imaginable disgusting and terrifying was manifest and afoot on the avenue this Halloween night . As is typical there was plenty of Halloween violence too.
There were numerous conflicts in the East and West Villages resulting in beatings , stabbings and shootings . Four males were shot on 7th avenue . We only saw one fight though on the avenue Halloween night .
Two strangers , a male and a female , started arguing in front of Ray's . The argument progressed to blows . The female's male companion attempted to drag her away from her male opponent but blows still landed on both parties before the sparing pair could be permanently separated .The male who had hit the female at least once was not popular with the folks who saw it all .