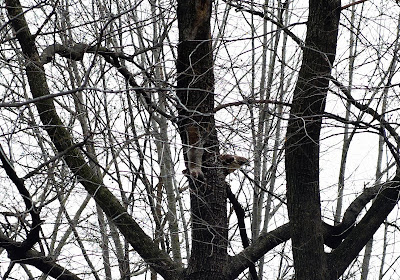 Pissing Again and Pissing Off a Few ... 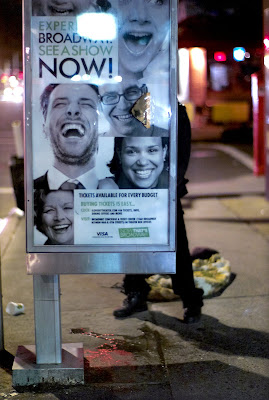 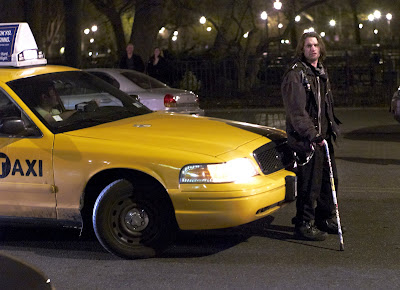 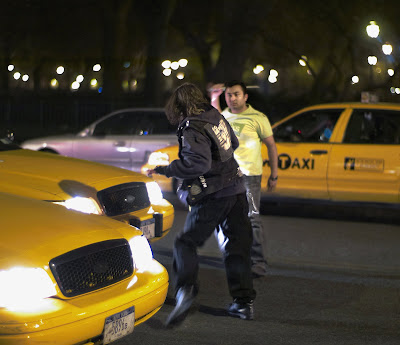 Wednesday night the usual suspect with a cane was again pissing at the infamous "Pee Phone" at the corner 7th street and avenue A . His urination though was much the lesser of his several malfeasance's on this night . He was drunk , drunk out of his mind and a menacing nuisance and then some to all . Some answered his actions with violence .
Jewels was on his usual drunken rampage on avenue A ; smart-mouthing , bad-mouthing , insulting and taunting all . He threatened folks with his cane raised ; a cab driver beat him for such behavior . All the usual behavior but for the exposed private parts : no flashing or mooning this night . Several cabs were stopped ' at times blocking a blocks length of traffic on avenue A .
While at Ray's he managed to purposefully rip Ray's garbage bags , spilling the garbage they contained all around on the sidewalk .
Among those he messed with was Biker Bill . Bill , after suffering many an insulting , enraging taunt , made a move in Jewels' direction to confront him . Some how Bill tripped or slipped on something , falling to the sidewalk seriously injuring his hip . The pain was so severe that Bill could not stand let alone walk . An ambulance was called for Bill . He was taken to St. Vincents Hospital . We were told by the hospital that Bill was released this morning . Considering who Bill's many friends are Jewels would be wise to not be seen again downtown ... on avenue A in the East Village especially .
We last saw Jewels when he came back much later to Ray's to pick up a filthy old sleeping bag . Many had considered doing some of their own urinating on this old rag of a bag . While at Ray's he had the gall to ask us to buy him another Spark's Malt Liquor .
P.S. : Biker Bill after being hospitalized and treated for a fractured hip at Beth Israel Hospital is now at the Village Nursing Home at 607 Hudson street at 12th st. . He is now in rm 636 registered under the name Bill Walker . He may by now have the phone 212 337 9496 connected in his room . The nursing home main desk is 212 255 3005 .
As a relevant aside we note here that usual suspect L.E.S. Jewels is reportedly in a local hospital with a broken jaw .
We will soon post the story of Bill's painful ordeal from the street being taunted and menaced by L.E.S. Jewels and the resulting injury , by way of a misdiagnosis at St Vincents Hosp , back to his hotel where he lay immobile and unattended on the floor in severe pain for two days , back to Beth Israel and finally to his current residency at the Village Nursing Home .
There is still some fact checking to be done .
# posted by Bob Arihood @ 10:21 PM 15 Comments 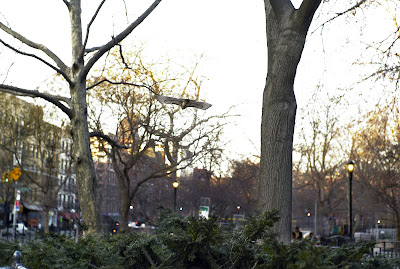 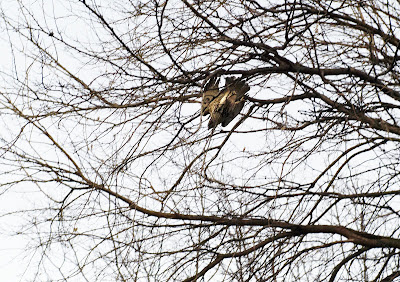 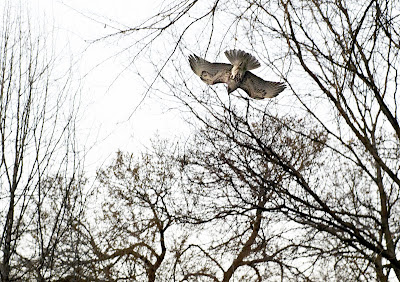 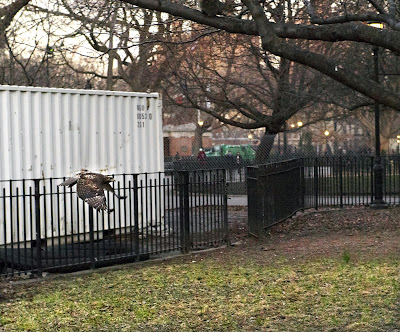 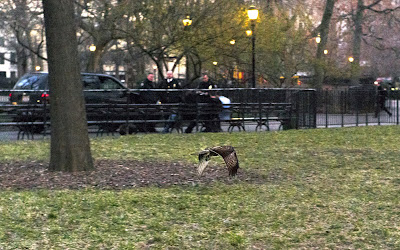 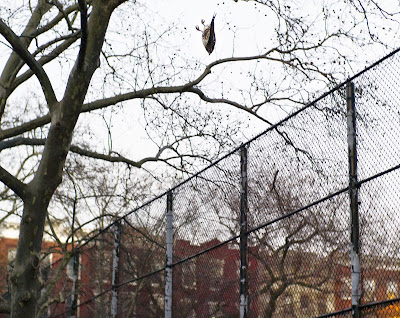 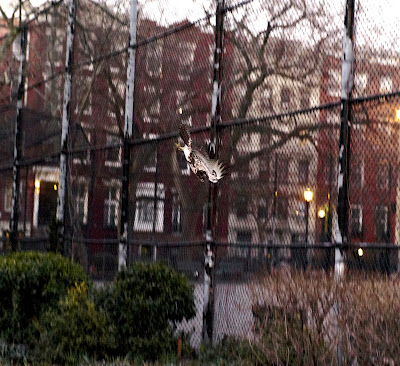 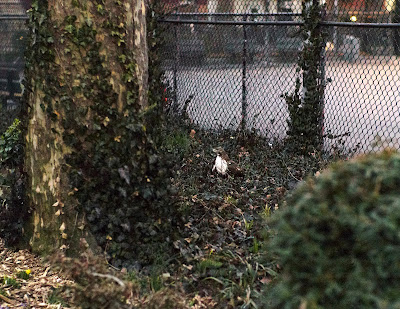 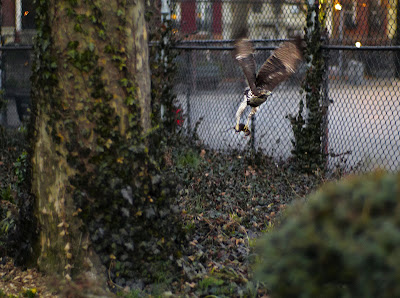 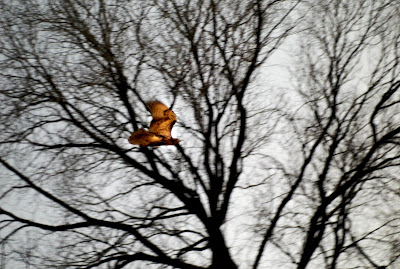 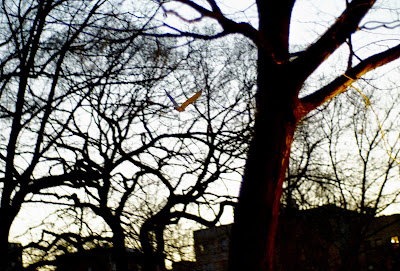 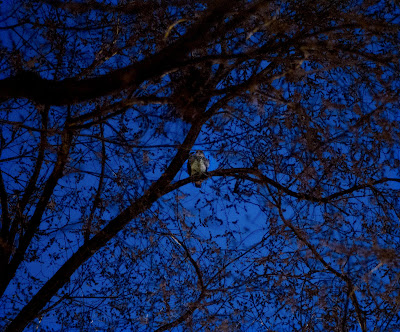 A hungry Red Tailed hawk hunted throughout the latter part of St Patrick's Day afternoon and into the early evening in Tompkins Square Park . Red Tails do not normally hunt in the latter part of the day and certainly not in the evening ; they do not see especially well in low light . It could be seen though that the hawks crop was empty . The desperate hunt went on well past sundown .
Red Tails seem to prefer to hunt from perches . A tree limb , a building ledge , a fence , any place from which prey can be spotted and descended upon . This day though after diving and dropping again and again from a perch no prey was taken .
In one instance the hawk dropped like a rock from a tree limb onto a rat . When the hawk attempted to ferry the rat to a favorite broad and flat tree limb for dismemberment and consumption it dropped the rat into a shrub . It dived into the shrub in pursuit of the rat but could not recapture its lost dinner .
The red Tail winged its way around TSP flying from perch to perch , hunting in the red light of a setting sun until it was just too dark to see its prey . The Red Tail went to sleep without dinner this day roosting in a tree on 10th street .
We note that though the images above may not appear so very dark the actual scene when photographed was much darker . For instance the scene of the hawk taking to air with rat in talons was dark enough to make it difficult to see and focus the lens correctly . There is blur and grain because the shutter speed was relatively slow , the ISO was high and the lens was set wide open at f 1 giving little depth of Field . 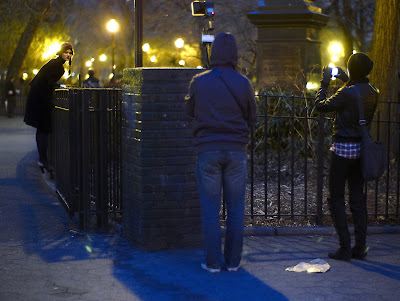 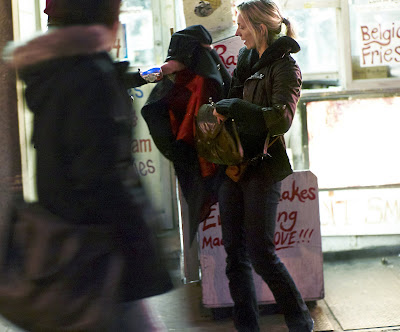 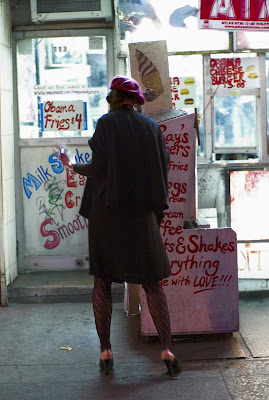 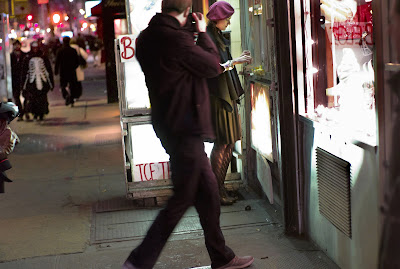 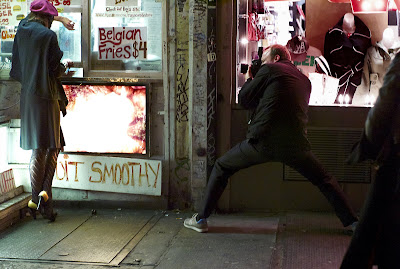 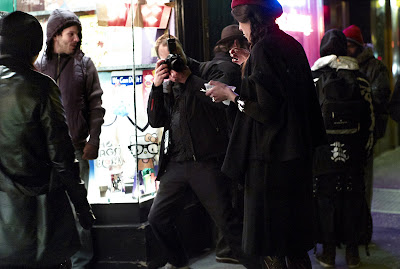 Pfc Vasquez at Niagara on Avenue A Sunday Night ... 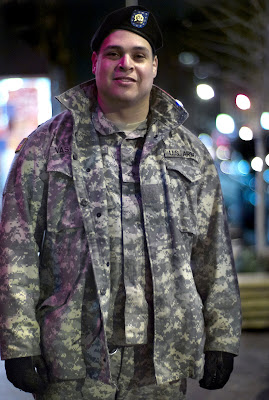 "Dutch" as he is known to most had just returned from a training exercise in Jersey . He stopped by the corner of 7th street and avenue A on his way home .
# posted by Bob Arihood @ 4:53 PM 1 Comments 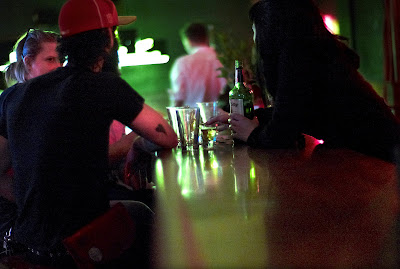 Lucy opened for business again on Friday . She always closes her bar when she takes one of her frequent trips to Poland . In Poland she spent most of her time with relatives in a part of the world where the days pass a bit more slowly and the snow falls whiter and softer .
# posted by Bob Arihood @ 4:43 PM 0 Comments

Pissing Again on Avenue A II ... 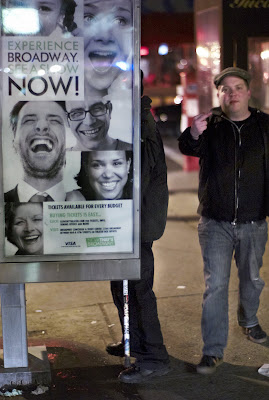 Again we find our usual suspect , cane in hand , relieving himself in the infamous phone booth at the corner of 7th street and avenue A .
Since our last presentation of a pubic urination at this booth , the booth of course has been thoroughly cleaned and sanitized . Note that the crimson scribblings of the local wag have been removed .
We actually saw some desperate soul use the phone so the repair team must have been to the booth also .
# posted by Bob Arihood @ 11:06 PM 2 Comments

Saturday Night Fun on Avenue A 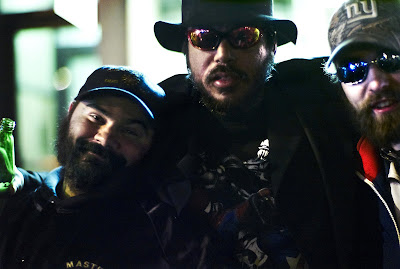