Off the Island For Two Days and Back in Custody ... 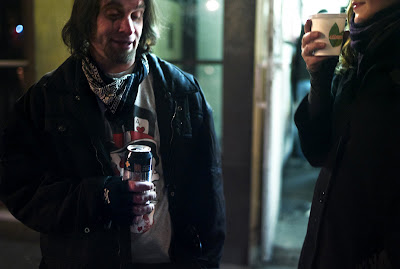 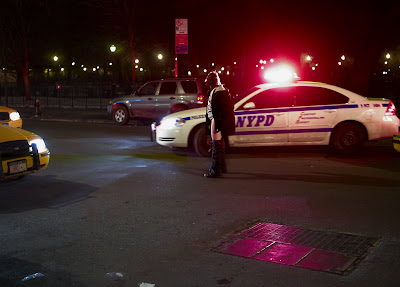 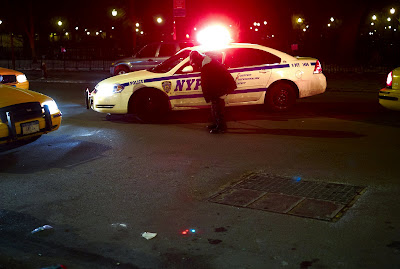 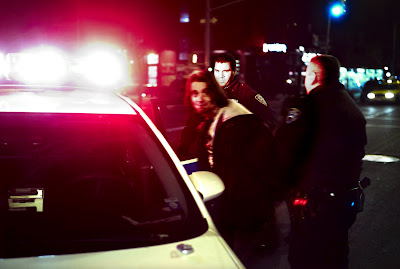 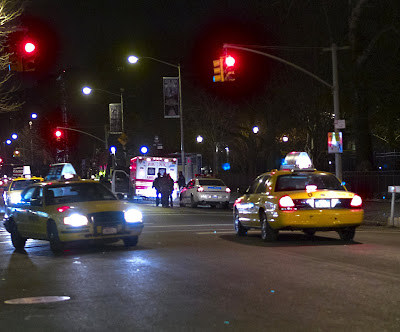 A couple of days ago Jewels returned from a month long stay on Rikers Island . This most recent incarceration amounted to the remaining portion of a roughly two month sentence for menacing and harassing a city officer .
Jewels had served nearly a month on Rikers waiting for trial until Amy made his $500 bail . Amy and Jewels went to North Carolina for both Thanksgiving and Christmas while Jewels was out on bail . On returning from a North Carolina Christmas holiday with Amy's parents Jewels returned to Rikers Island to serve the remaining portion of his imposed incarceration . Last night after 2 days of freedom he was back in custody .
Having downed several cans of that special alcoholic concoction , Sparks Malt Liquor , Jewels had all that special juice needed to raise hell and entertain on avenue A last night . Nothing new last night . His was the usual modus operandi , mooning and flashing in the middle of avenue A . The onlookers on the sidewalk were entertained but the cops weren't .
Taken by the cops by surprise from behind , Jewels was caught with his pants down . He was seized and cuffed . He was placed in an RMP and hauled down the street away from a small but growing crowd in front of Ray's Candy Store and later transferred to an ambulance . We assume that he was taken to one of the local hospital detox units .

A Debauch in the Trees Could Get You Eaten : A Moral Tale From Tompkins Square Park ... 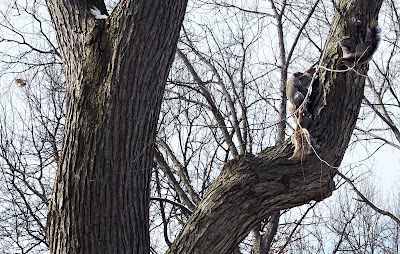 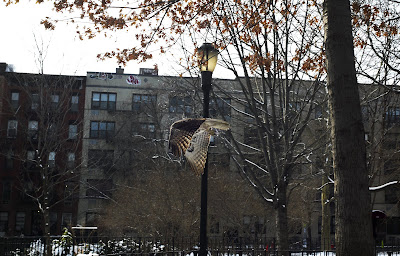 It's an arboreal Hell Fire Club in the trees in Tompkins Square Park lately . Yes the sex is sizzling everywhere as small fuzzy-butted sciurideans , ardent in pursuit and consummation , live life to the fullest . Its squirrel mating season again and all our bushy-tailed TSP friends are lost in a frenzied search for worldly pleasures .
Two days ago on a sunny afternoon a party of amorous squirrels lost in the haze of a life of frenzied passions , group sex and voyeurism was spied by a Red Tailed hawk as it winged its way around the park . Most of the cupid lanced rodents spotted the hawk and scurried out of harms way . As the hawk approached though , one indulgent passion besotted lover was more concerned with the more narcissistic attentions , vanity of vanities , squirrel grooming behavior .
The hawk swooped in and reached with talons fully open for our furry Narcissus . The winged one missed its chosen afternoon repast and winged off , empty-taloned , into the upper reaches of TSP . Our little fashion-plate of a squirrel though was knocked for a surprising plunge to a snowy landing 15 feet below .
# posted by Bob Arihood @ 10:42 PM 6 Comments 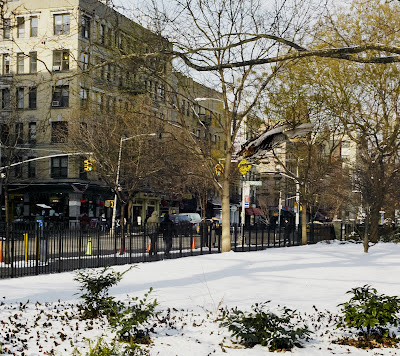 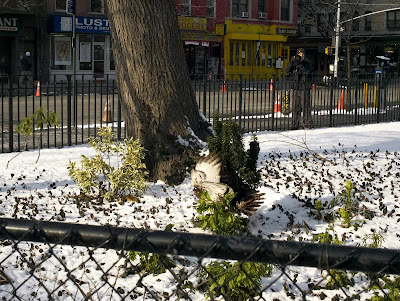 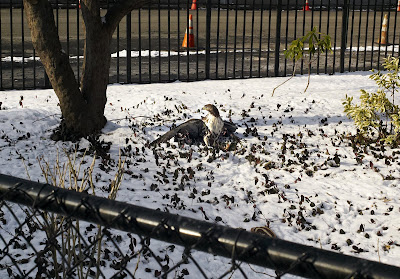 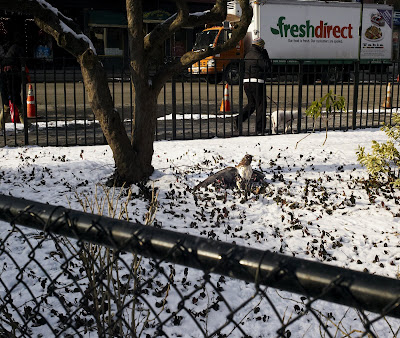 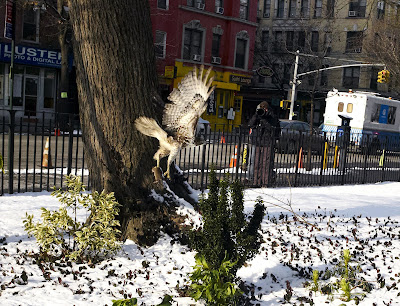 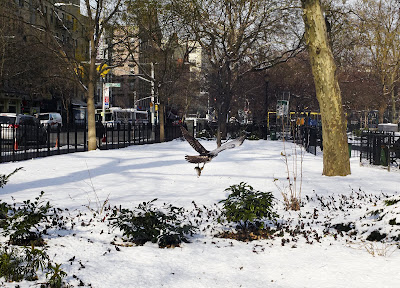 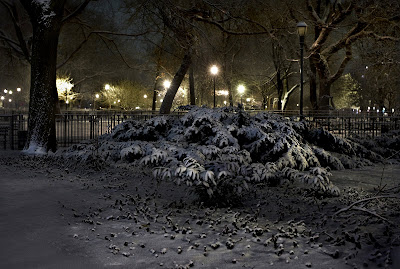 Beneath the green snow laden boughs of this stand of low evergreen shrubbery in this TSP snowy winter scene , half a hundred or so park rats live in a warren of dark tunnels--snug-as-a-bug-in-a-rug , fat ,warm and comfy--all winter long .
As for our kind , the humans , on a night like this in this same dead-of-winter scenery perhaps by chance a weary jonesin' soul can be spied lookin' for a bag of dope or perhaps a less desperate spirit found , huddled comfy with some cheap vodka under a heap of coats and blankets , at the chess tables . Such is Nature in Tompkins Square Park.
# posted by Bob Arihood @ 2:53 AM 1 Comments 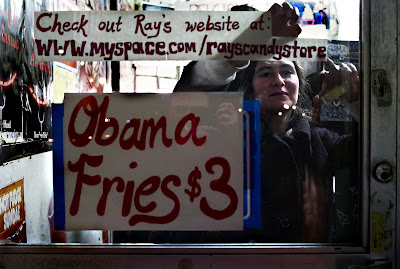 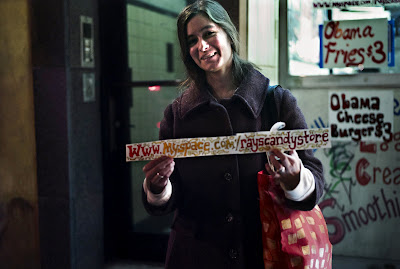 Saturday night Amy helped Ray promote his struggling candy store by making some signs to advertise his products and to also let all know that Ray now has a MySpace page . The MySpace page was put together by Eden last week .
These are dark days--dwindling gross receipts , no profits and rising rent--for Ray but he's lucky that he has friends like Amy and Eden who are attempting to help him save his candy store .
Ray will be 76 years old next week . To make his candy store work today he must work 12 or more hours a day , 7 days a week . He is not well and needs help with some difficult medical problems . He has no money for doctors ; he can't even buy the new glasses that he needs to read . He must work like this because he has no pension , no social security , no other income . The candy store today only loses money ; he can't pay his bills . He has no money for a lawyer or other experts to at least get the minimal Social Security pension to which he is entitled , the bare minimum for his survival
Because of a complicated bureaucracy created paper-work problem that he cannot solve on his own he cannot get the social security pension that he is entitled to . He needs help .
Recently he has tried to get help from the NYC Dept. of Adult Protective Services which exists to help older individuals like Ray who can't help themselves . So far he has managed to get lost somewhere in this bureaucracy too.
# posted by Bob Arihood @ 7:48 AM 14 Comments 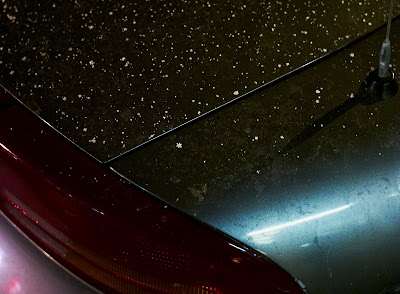 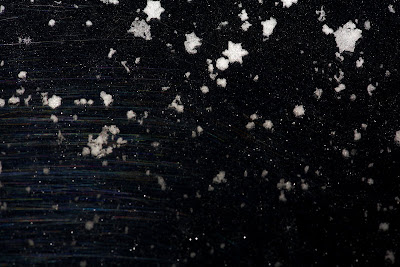 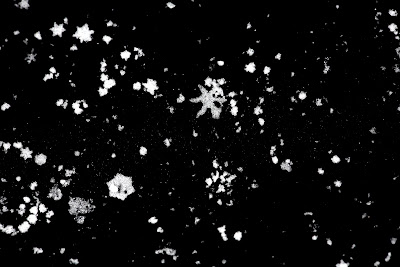 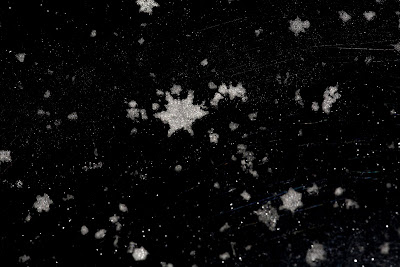 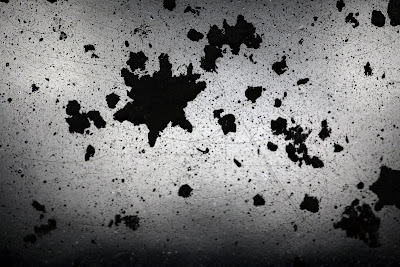 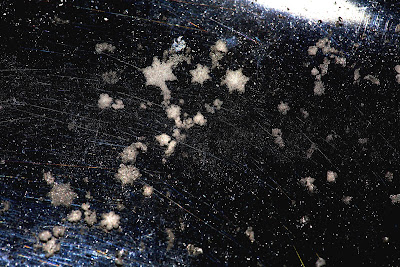 The fallen stars (snowflakes ) above were first noticed by Eden who brought them to our attention . Flakes this size , this regular in shape are quite unusual . Some were more than an eighth of an inch flake tip to flake tip as they lay in their final resting place on a car hood on avenue A . Usually flakes this size are agglomerated numerous smaller flakes creating an amorphous mass . These flakes also persisted for some time holding their distinctive regular hexagonal shapes . We noticed that they lasted well beyond an hour .
When we arrived home we took out a Canon 5D digital camera and mounted a 180mm macro-lens and the Canon macro-flash unit designed to work with this lens . We returned to the street and photographed snowflakes on the hood of a black car .
These images show the star shaped flakes to not be quite so regular as they appear from a distance . Still they are rather spectacular to our mind , we've only rarely seen such before , even in their more revealing up-close portraits . The macro-lens shows that in fact these stars are actually structured of smaller granules of snow that have agglomerated along hexagonal lines preserving the distinct star shape .
The stars vary in dimension from perhaps 1/32 in to 5/32 in .
Today on Jeremiahs Vanishing New York Jeremiah links to a site that pictures single hexagonal water crystals , single barely visible snowflakes . These precise , sharply defined crystals were photographed at Caltech under very carefully controlled environmental conditions through a microscope .
What was so amazing about Saturday nights stars is that they were able to grow so large so nearly perfectly and persist long enough to be photographed using our much cruder means .
http://www.panopticist.com/2008/12/amazing_snowflake_photos.php 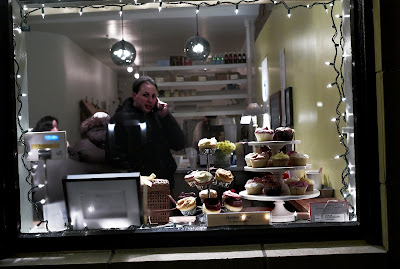