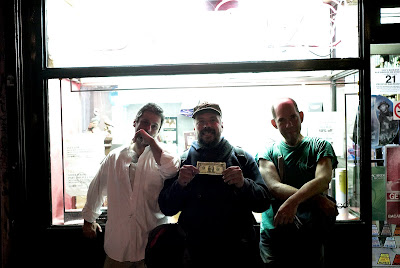 Jay and associates Giovanni (left) and Victor are out front of the local liquor store with a special dollar in hand . Its an important dollar ; the last one necessary to complete the purchase fund . Now the booze necessary to complete a worthy evening will soon be in hand .
Jay and Giovanni are just back on the street having been locked-up the last 24 hours for violating the open container law and some inconvenient outstanding warrants .
# posted by Bob Arihood @ 2:10 AM 6 Comments

Slacktivists Call for a Friday Night Protest at Lazarides Gallery at 282 Bowery at 6 pm ... 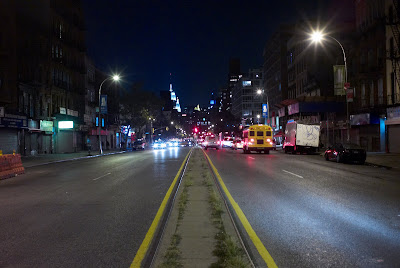 Again another weekend will begin with a protest organized by the "slacktivists" . This one will be at the Lazarides Gallery's "The Outsiders , New York " exhibit at 282 Bowery at 6pm and will be followed on Saturday afternoon by a concert in Tompkins Square Park . The TSP concert will be by a different group of organizers but will include performances by "left Over Crack" singer Scott Sturgeon who last performed at the slacktivist's "Donut Social " and was later arrested in TSP for throwing donuts at police .. This time Sturgeon will be performing with "Starfucking Hipsters ".
The location , celebrities to be present and other details of the protest will be found in the Thursday edition of the NY Post's "PAGE SIX" .
http://www.nypost.com/seven/09252008/gossip/pagesix/stay_outside_130585.htm
http://www.lazinc.com/content/pdf/press-release-outsiders-new-york.pdf
# posted by Bob Arihood @ 1:21 AM 9 Comments

Drunken Jerzoid Plows Through Stacked Produce at the Farmers Market Making Some Tomato Paste on the Way ... 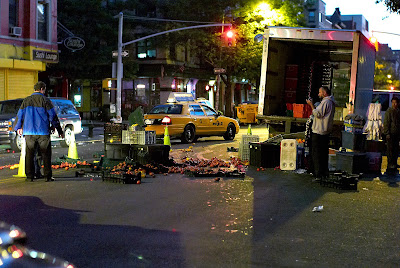 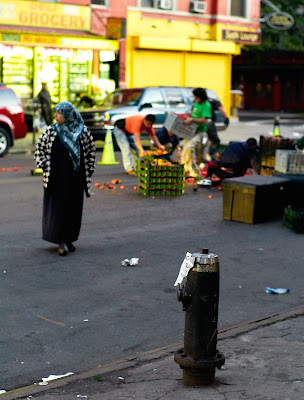 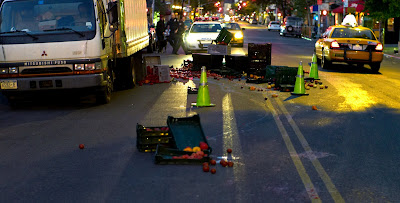 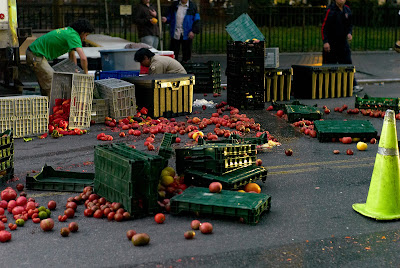 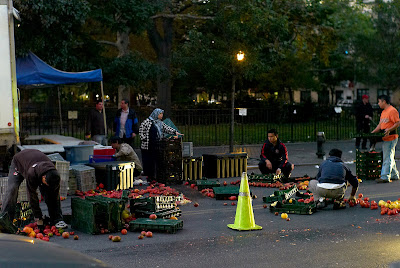 A vehicle bearing New Jersey plates plowed through some stacked produce crates , pushing several crates of tomatos into the middle of avenue A , around 6 am this morning .Several witnesses were present with all noting that the driver of the vehicle was quite angry and quite drunk .
A New Jersey tagged vehicle , as is so often the case on Saturday night on avenue A , was parked in front of a fire hydrant while its party of revelers were directly across avenue A at Odessa restaurant . According to witnesses when the party returned to the vehicle an argument ensued , beer cans in hand , over the truck that was unloading and blocking their exit from their illegal parking space . The truck driver noted that several of the party were threatening while banging on his truck with the beer cans . Before the truck could move some of the party of drunken bridge-and-tunnel revelers reved their engine and drove into the stack of vegies ahead of them clearing a path and pushing several crates ahead of them down avenue A . According to witnesses some of the party of the out-of-state vehicle were left behind at the scene .
No one was injured in this incident though it was close at times . According to witnesses some of the workers doing the unloading were barely missed by an inch or so as the drunken driver accelerated through the vegie crates .
The vehicle's New Jersey plate number was recorded and given to the police .