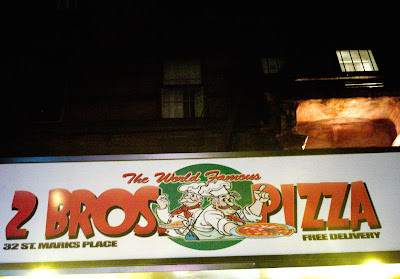 ...when you can have one for a buck at 2 Bros. Pizza at 32 St. Marks Place . More-or-less the same as other neighborhood slices in size and taste --- and who really cares that much about such things when they are really soused --- but for a buck a real deal . A deal that is the latest sensation among the hungry minions of late-night St. Marks Place . 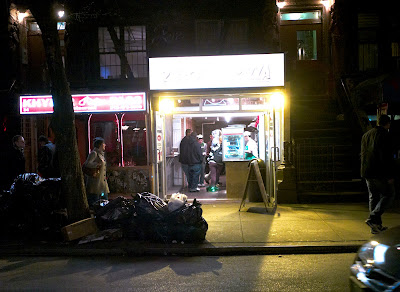 What's Lookin' at You ? : Protest against Electric Eyes in Tompkins Square Park , April 3rd at 3:00PM on the Steps of City Hall .... 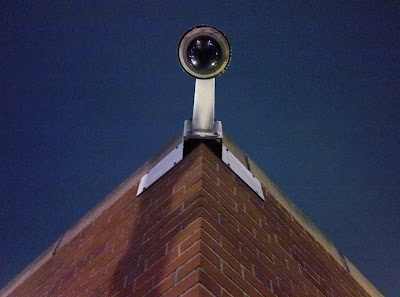 They are all over the place watching you . Electric eyes watching what you do in the streets , in the bars , in the stores and in some of our city parks . New York City is now considering installing more of them in more of our city parks . Some even suspect that electric eyes will soon be installed in TSP . They fear that these electric eyes will be connected ultimately to a new FBI supercomputer and that in the name of "Homeland Security " , you and your friends will be watched day-in-day-out as a national security priority .
On April 3rd at 3:00 pm on the steps of city hall , some of Tompkins Square Park's elders , a hand-full of anarchists and some of the venerable Yippie elite will gather to conduct an hour long protest with music to protest the possible future installation of electric eyes in TSP.
Join the fray ! The straight-laced and the fringe can join together on the afternoon of April 3rd to manifest as much of a robust protest against government watching us as can happen in an hour .
# posted by Bob Arihood @ 1:16 AM 1 Comments 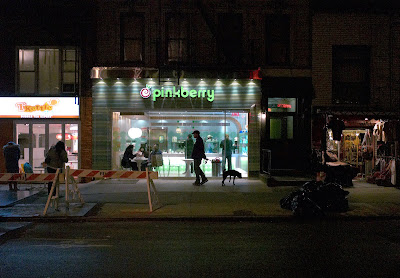 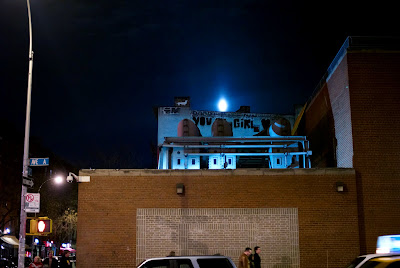 A full moon rises over the transformer bays at the 5th street Con Edison substation : moon-beams and intense electro-magnetic fields contribute a special charge to the evening air along avenue A . 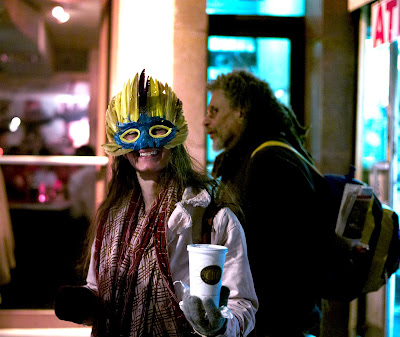 With Amy wearing a mask , Jewels and Amy stroll arm-in-arm down avenue A . They are out on a date on date night ,Saturday evening . 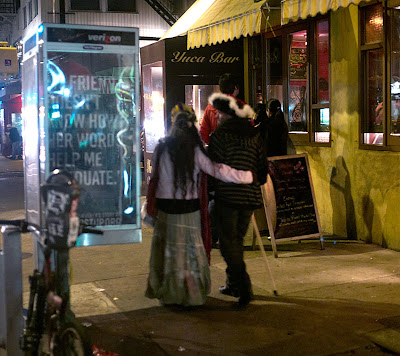 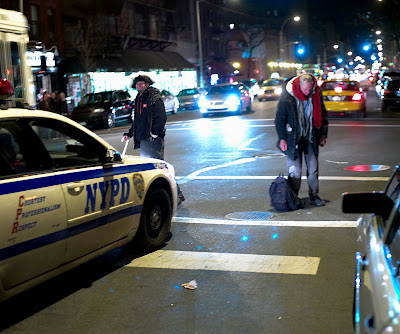 Date night isn't entertaining enough though and Jewels takes to the street stopping traffic , sharing the intersection with a man drunken and as still as Lot's wife after she turned to a pillar of salt , at 7th street and avenue A. 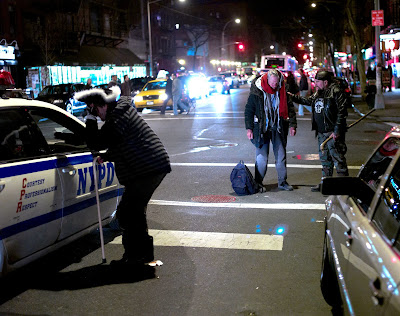 Biker Bill helps the old guy out of the intersection as Jewels gossips with NYPD . The drunk is eventually taken to hospital by an ambulance . He was so drunk because he likes to drink but he was so distraught because he had lost the room in which he had been living . 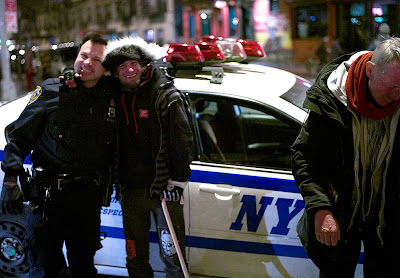 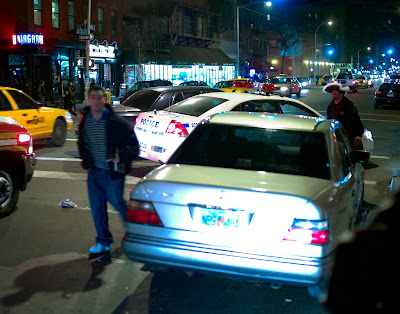 Just like last spring its back to games in the street chasing a man in traffic who had also been released recently from prison . 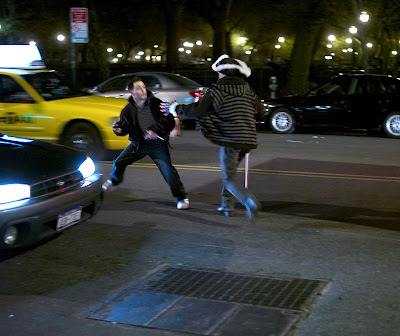 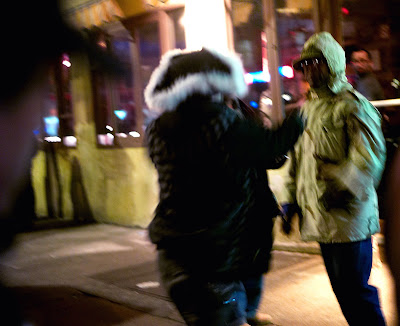 After smart-mouthing and insulting this man Jewels is beaten by him on avenue A.
Shortly before this event , while we were talking to a friend , Jewels had while smart-mouthing and taunting us , sneakily whacked us with his cane in the right gonad causing a good bit of a very special kind of pain . In response we grabbed Jewels and rammed his head into the wall of a building and then put him on the sidewalk . We were told later by witnesses to the event that as we were handling him he cried " assault " and "call the cops ". Fortunately , being that the cops were but a few feet away , we got control of ourselves , regained our composure and let Jewels go .We did not press charges though the cops were ready to cuff him and take him away . Though we gave him a break , Jewels continued his taunting and smart-mouthing of us for rest of the evening , at least until the beating he received from the man pictured above and below subdued him .
Jewels mistakenly blames NMNL's coverage of his arrest at 7th street at avenue A last July for being responsible for his recent 8 month incarceration at Rikers Island . Jewels being drunk at the time of his crime does not remember that he was arrested and incarcerated for grabbing a man by the throat , striking him with his cane while demanding money from him .
CORRECTION : Jewels' head did not quite make it to the wall of the building . Ray's door , which we broke , got in the way . We repaired Ray's door late last night . 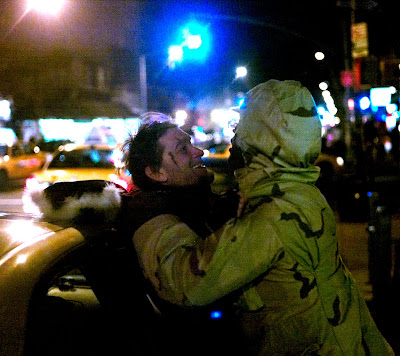 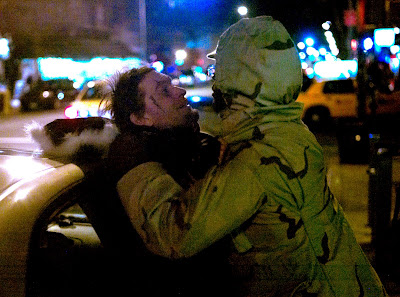 .... and a moment of terror for Jewels as the beating continues . 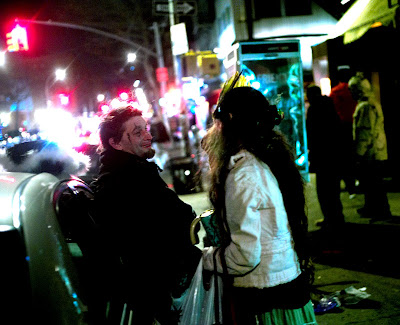 Amy comes to comfort a Jewels now near tears after his beating . 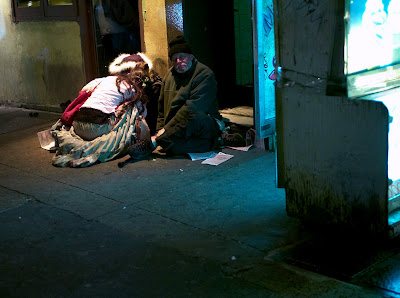 While Saturday night revelers stuff their faces with Ray's Belgian Fries and vast selection special sauces , Amy tends to her wounded and exhausted Jewels just before she leaves him to return to her dorm . 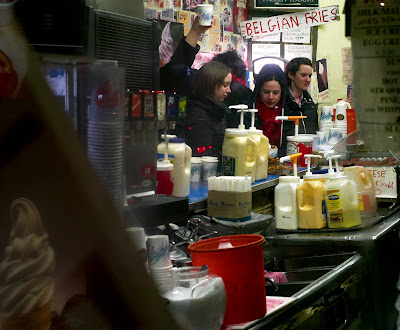 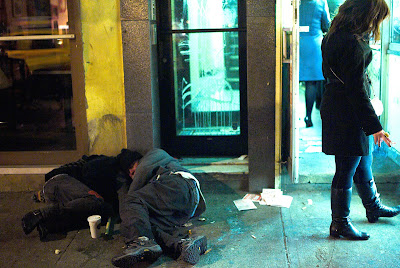