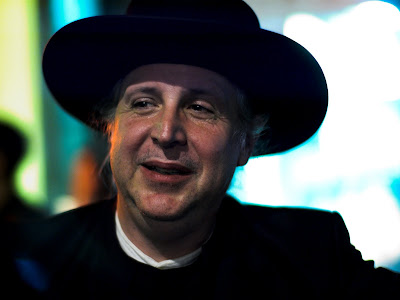 The only plain dress Quaker that we know of that carries three cameras with him all the time .
# posted by Bob Arihood @ 2:51 AM 1 Comments 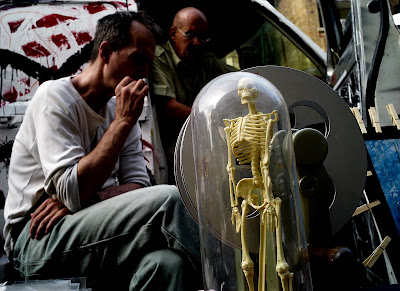 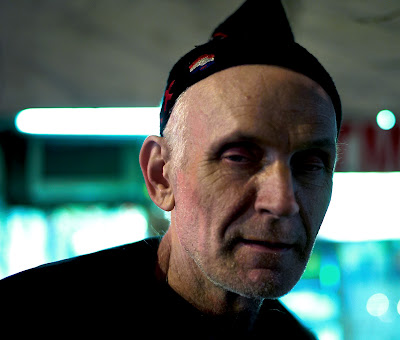 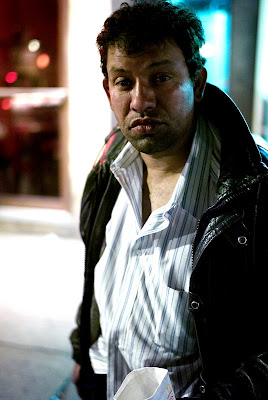 Louis fought a lot of fights in Tompkins Square Park . For a time last summer he was a bit of a park terror until "Choice" put him down in a decisive defeat in TSP one afternoon .
# posted by Bob Arihood @ 4:53 AM 0 Comments 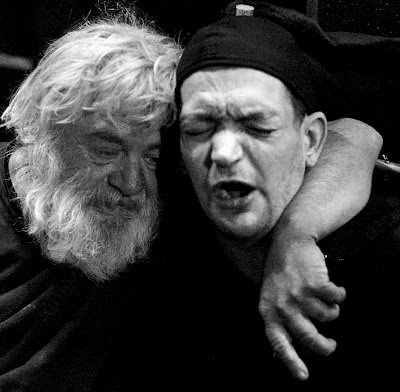 Keith has difficulty speaking now because of injuries resulting from having 4 young men kick him repeatedly in the head in Tompkins Square Park a bit more than a month ago . He needs medical attention and should be in the hospital but he has at least twice signed himself out against the advice of his doctors inorder to be back in the park and street , free and with his friends .
# posted by Bob Arihood @ 3:36 AM 2 Comments 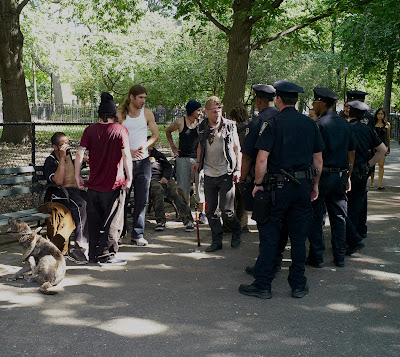 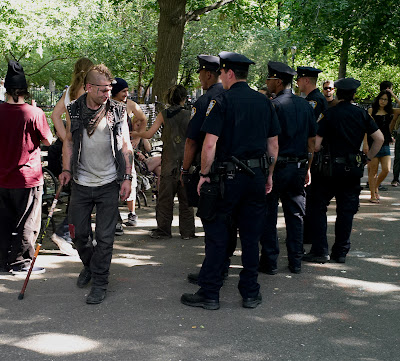 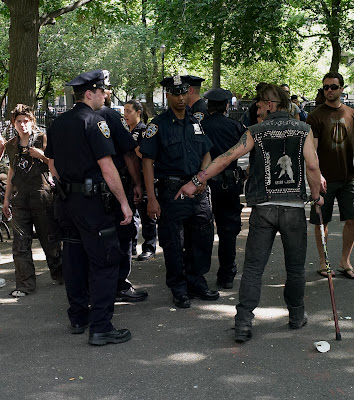 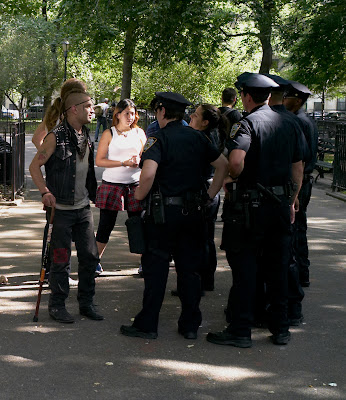 On Tuesday afternoon a training patrol was in Tompkins Square Park with a Lt. and an aide introducing the troop of 5 new officers to the realities of the Park . The training included an introduction to the many usual suspects in most of the troublesome locations in the park including the denizens of "Crusty Row ".
The folks on "Crusty Row" were of course by way of example a part of the training program and were thus inspected for beers and other inappropriate possessions , told to sit-up straight on the benches , not to sleep sitting-up , not to sleep stretched-out on the benches and to stow their possessions in a neat ,clean and orderly fashion .
Responding to the training inspection on "Crusty Row", Jewels conducted his own impromtu inspection by reveiwing the troop looking for and finding irregularities in the troop member's uniforms or gear . Above Jewels has found a strap that is not properly secured .

4th of July Fireworks on Avenue A ... 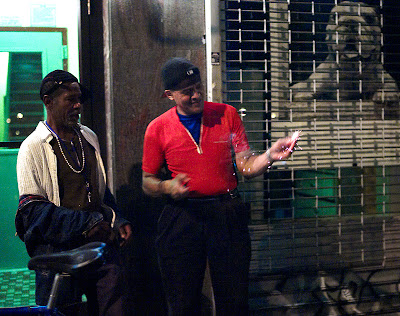 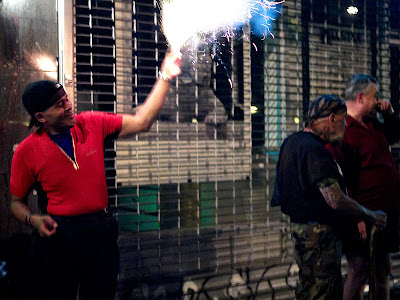 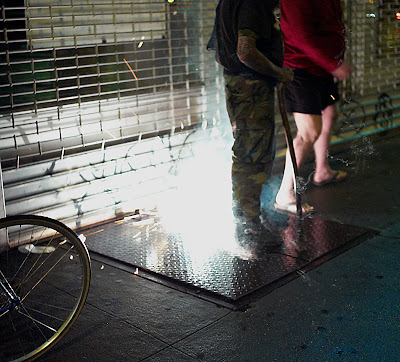 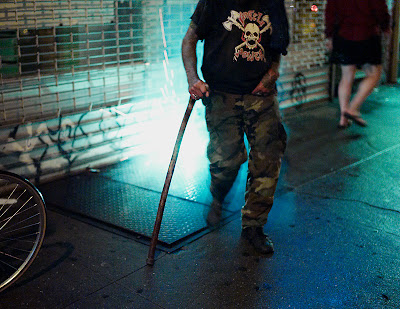 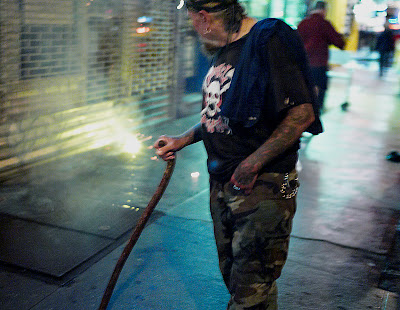 A Solicitous Fund-Raiser and an Accomodating Patron 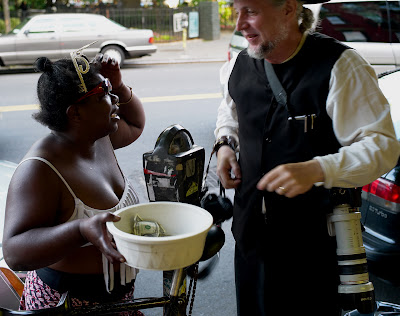 "Outlaw" and His Ride 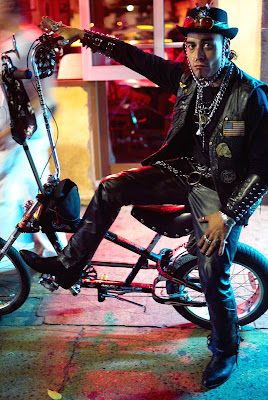 The Poet ,Folding Chair and Papers in Hand , Seeks His Audience on Avenue A 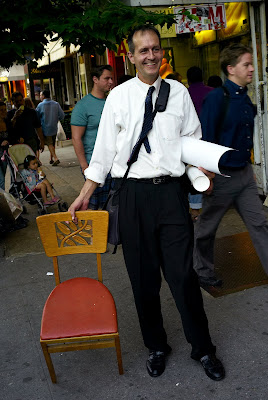 Poet John Lesko preparing to read his poems out front of Ray's candystore on Sunday evening .
# posted by Bob Arihood @ 12:42 AM 0 Comments

Pair Stopped on Avenue A for Allegedly Discharging a Weapon on 14th Street... 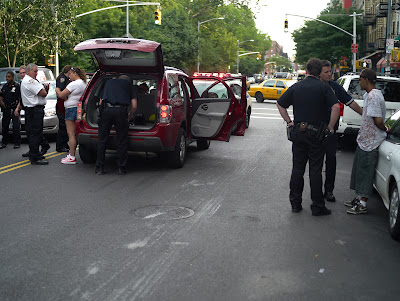 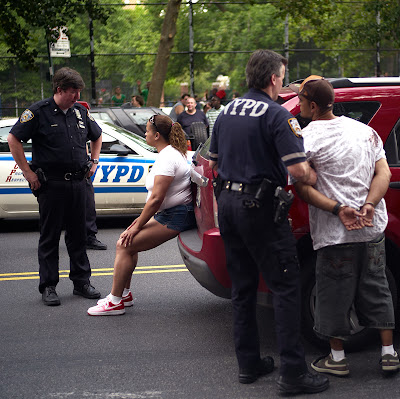 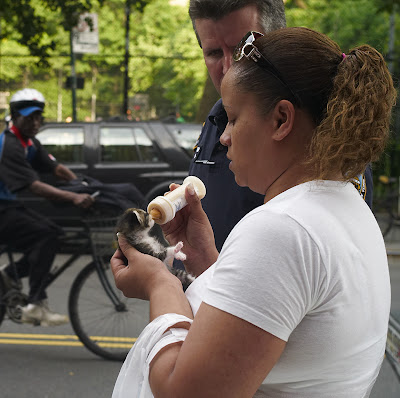 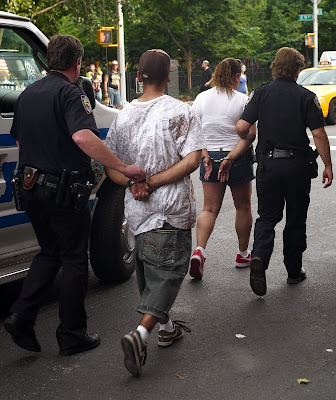 A burgandy Chevrolet SUV was stopped on avenue A between 9th and 10th streets around 6 PM on Saturday after witnesses identified the occupants as the pair that had just allegedly fired a gun on 14th street .
The two , a male and a female , remained calm and the situation at the scene was surprisingly , minimaly confrontational . Indeed the female suspect was allowed to remain un-cuffed while she fed her very young kitten with food brought to her by a member of the neighborhood concerned for the kitten's welfare .
It appeared that witnesses at the scene reconfirmed that the two were indeed the ones responsible for the gun-shot fired .
Police searched the vehicle at the scene for evidence and then after finally cuffing the female removed the suspects and the vehicle to the 9th precinct .
# posted by Bob Arihood @ 12:11 AM 0 Comments