Night-Life on the Stretch of Avenue B from 3rd to 4th Street ... 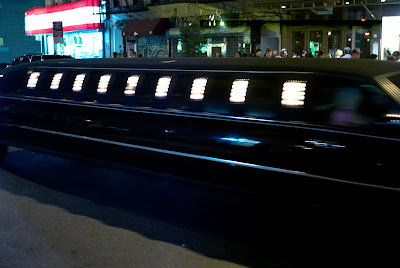 Neighborhood folks are complaining that there is too much of it .
# posted by Bob Arihood @ 5:30 AM 1 Comments 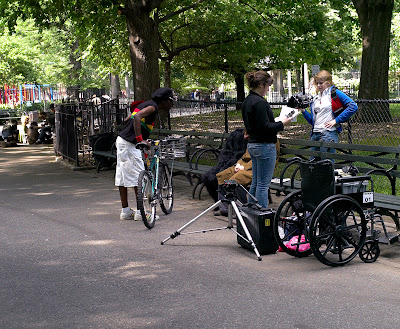 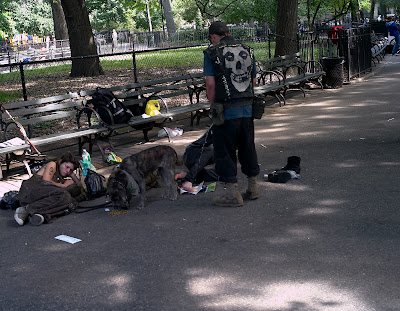 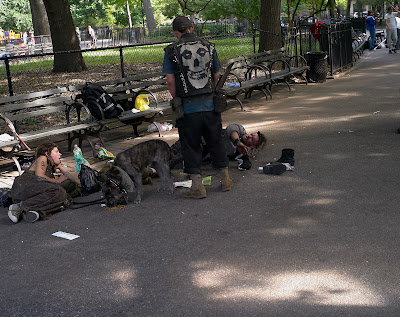 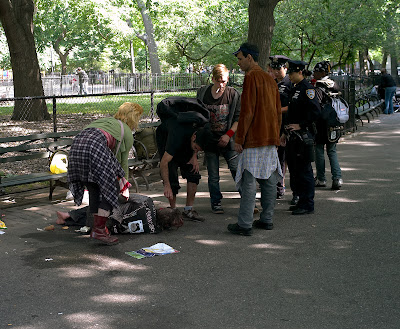 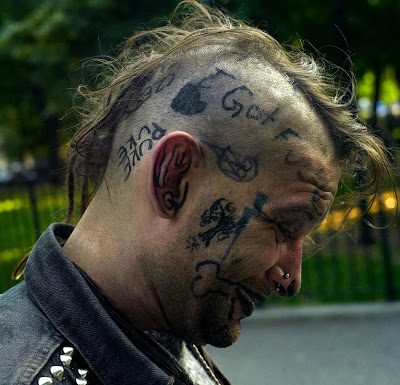 On this Flag Day afternoon as some well behaved young film students on one end of "Crusty Row" were quietly shooting a student film with an aging Arriflex motion picture camera , Jewels at the other end had drank himself into a stupor and finally passed out .
Some of Jewels' crusty compatriots decided to have some fun with the sleeping Jewels and began drawing on his face with felt-tip markers all sorts of crude and lewd figures . One of the more dexterous crusty miscreants using a large needle and some nylon line sewed his sleeves to his sweater and also sewed the lower portion of his pants-legs together .
Being allowed to peacefully sleep-off the drunkeness wasn't part of the plan for Jewels this Flag Day afternoon . As soon as the sewing was completed the young crusty who had done the sewing un-zipped his fly and proceeded to void his beer-swollen bladder on Jewels bare feet . As Jewels woke to this golden shower on "Crusty Row "he found that the only movement available for escape , being all sewed-up as he was , was to wiggle like a large worm as the young man continued to aim his stream , moving it higher up Jewel's legs until there was no more urine to void .
A short time later as two police officers approached this pathetic scene , several of the young crusties including their dog and the pisser left for a more out-of -the-way place to gather and drink their beer . The officers seemingly had no way to respond to what they saw and shortly just walked a way .

The Day of Father George's Last Mass at St .Brigid's 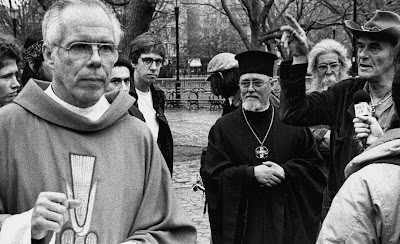 We recollect that this picture , taken several years ago , was taken at a time when St. Brigids parish and the East Village were both a good bit more radical and were regularly embroiled in political turmoil . So it was that Father George was considered by some a bit too radical and political . We also recollect that he was being allowed to move to another parish in Central America by a conservative New York Archdiocese .
In this picture Father George and Father Pat ( in black ) are in Tompkins Square Park gathered with some of the neighborhoods more politically activist individuals on the Sunday on which he had celebrated his last Mass with his parishioners at St Brigid's Church .
www.savestbrigid.com
# posted by Bob Arihood @ 1:37 AM 0 Comments

The Defenestration of Flatware on 2nd Avenue ... 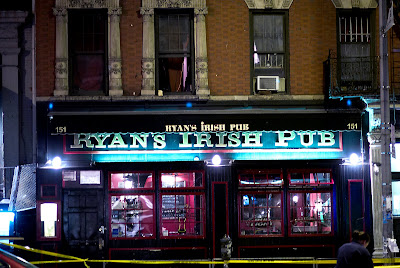 Sunday night someone was sufficiently moved so as to toss plates and other tableware to the street from a window above Ryan's Pub at 151 2nd avenue . No one was hurt but witnesses reported that someone , probably accidentally , losed a round in the process of raiding the agitated individuals apartment . Also according to witnesses at the scene , Police used an ESU unit and a special weapons team to gain access to the apartment .Second avenue was closed from 9th street to 14th street and NYPD Aviation was in the air at the scene . It seems that the emotionally enraged culprit absconded successfully.
# posted by Bob Arihood @ 8:31 PM 1 Comments 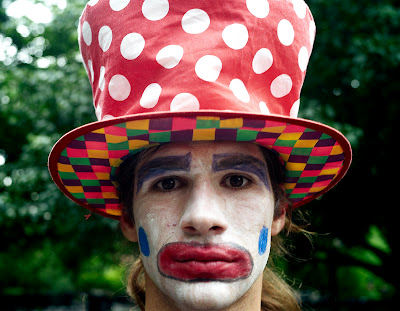 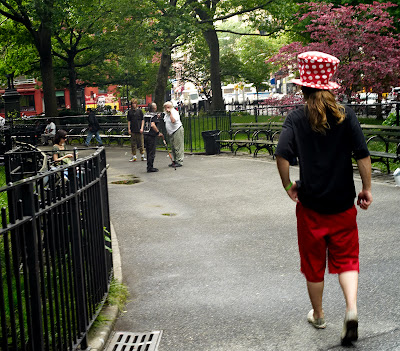 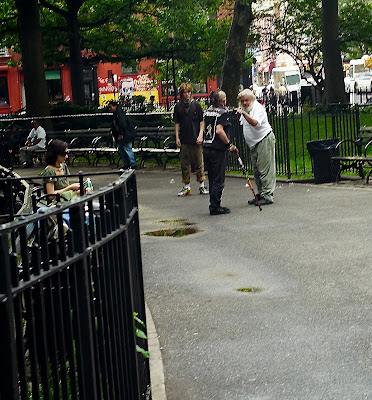 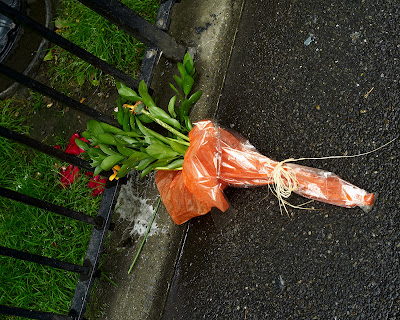 As we were photographing Blinky we heard in the distance angry shouts and the sound of breaking glass . We and Blinky headed toward the source of these sounds : Carl and Jewels violently arguing in the row of seats next to avenue A in Thompkins Square Park .
The confrontation , which came close to heavy blows being delivered , ended with the broken glass candle holder which Carl had thrown at Jewels on the ground , a very angry Carl standing alone and Jewels walking away with his cane .
Carl was angry because Jewels had just very disrespectfully wrecked a memorial to Chino who had died recently . This memorial has been maintained in the park by some of the park friends of Chino for a week or so . Chino was a regular in TSP for a long time . According to witnesses , Jewels had taken one of the better flowers from the memorial and also had senselessly damaged those floweres that remained .
# posted by Bob Arihood @ 7:43 PM 1 Comments

Lawrence Under the Hawthorn 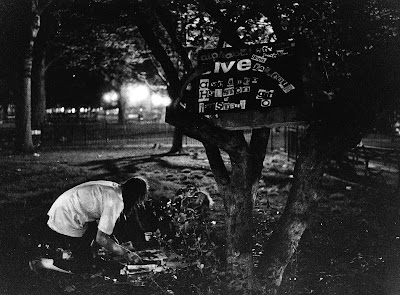 In the dark of night , under a hawthorn tree in Thompkins Square Park ,Lawrence was working intently, cutting out letters from advertisements that he then assembled into collages of cryptic phrases that , when finished , he placed in the trees for all to see the next day .
# posted by Bob Arihood @ 6:31 AM 1 Comments 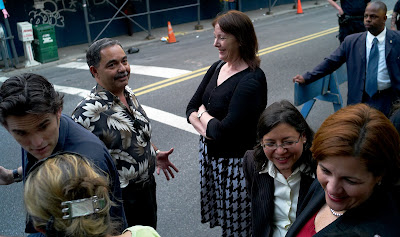 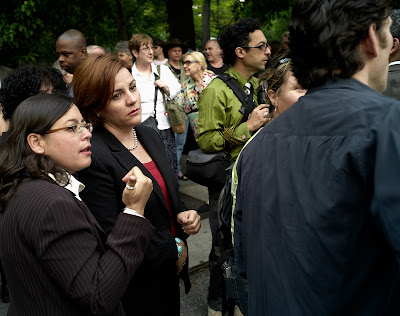 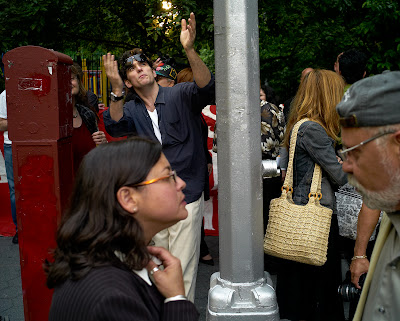 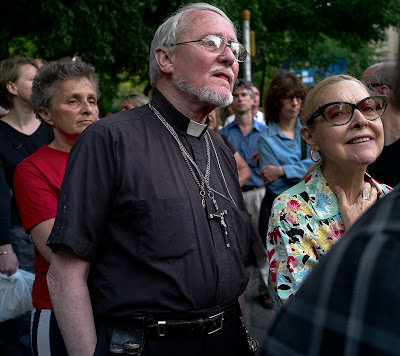 Last Thursday evening former St. Brigids priest Father Pat , City Council speaker Christine Quinn , Council person Rosie Mendez , Edwin Torres and Matt Dillon gathered across avenue B from St. Brigid's with a hundred or so others in a vigil of hope for the continued existence of St. Brigid's church .
www.savestbrigid.com
# posted by Bob Arihood @ 4:51 AM 2 Comments

Marlene on Avenue A a Few Years Ago ... 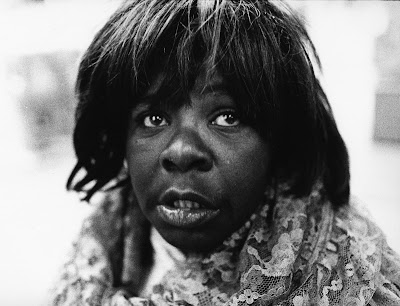 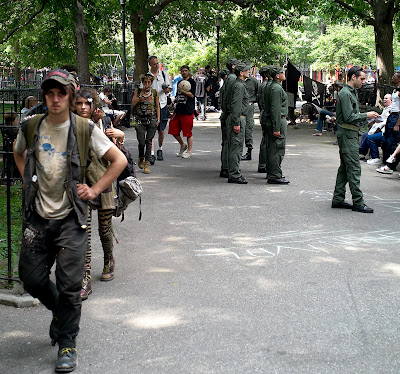 No.. not really , just some thespians in fatigues advertising the play " The Brig "