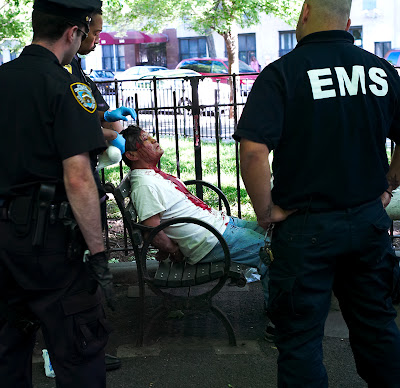 Last Wednesday afternoon , according to witnesses , the man pictured here was pushing a cart laden with empty bottles around and through the path in the midst of the chess tables in Tompkins Square Park . This path is a narrow one and somehow our bloodied subject attempted to force his way past an older woman and in doing so was judged by some present at the scene to be disrespectful of this elderly woman .There were words and a scuffle then justice came as a series of blows delivered by some un-named individuals to the face and head with the resulting damage as seen above .
When police arrived they cuffed and questioned the bloodied man but he had nothing much to say to the officers other than that he just didn't quite know what had happened .
# posted by Bob Arihood @ 6:48 AM 0 Comments 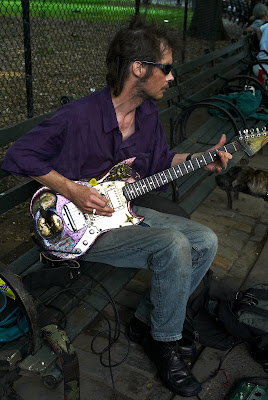 In Watteau's painting , in a verdant park it is a darkly resolved female carved from stone that stands in the background unresponsive to the solitary musicians efforts to charm : on "Crusty Row" it's numerous crusties drinking beer that pass the day midst the green of TSP heedless of this musician's presence as he plays hauntingly his ancient wildly embellished guitar .
Saturday night at around 9 PM , Rom jams at no. 9 Bleecker St. at the Yippie Cafe .
# posted by Bob Arihood @ 5:16 AM 1 Comments 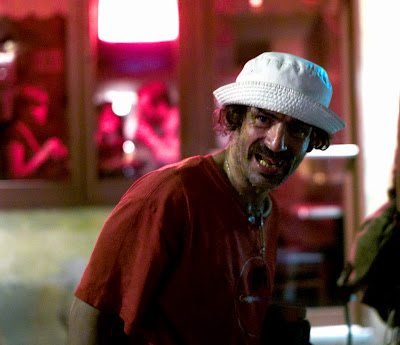 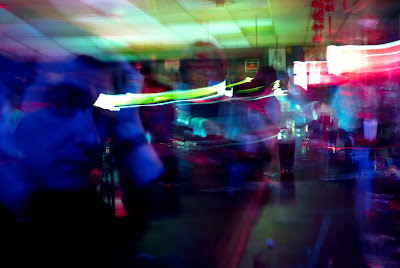 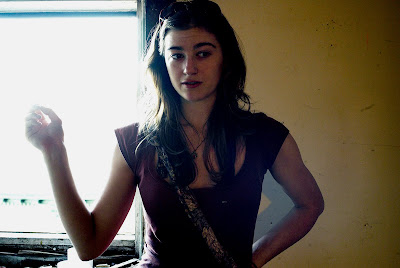 Mr. Boogers on Avenue A 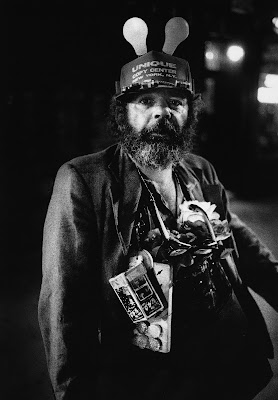 Several years ago Mr. Boogers , a very sincere and good-hearted fellow , left his native Canada , his family and a job testing fan-belts to travel the hi-ways and by-ways of America in an old beat-up wreck of an Oldsmobile .

On this night Mr. Boogers , with only one bulb lit , found himself broke on avenue A and ever so earnestly attempting to sell something from his collection of curiosities , gags , gizmos and comically perverse sex toys . Typically Mr. Boogers sales technique amounted to cracking jokes about nose-picking and booger-eating or singing lascivious tunes to earn the attention and favor of a prospective customer . 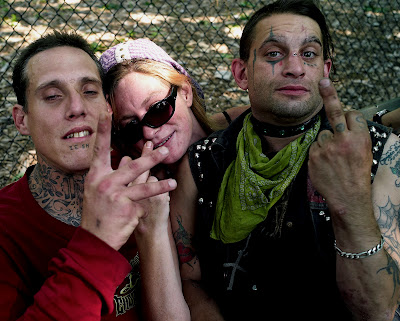 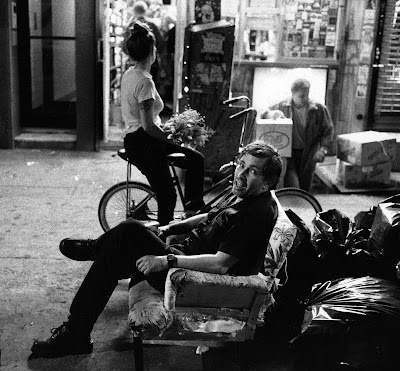 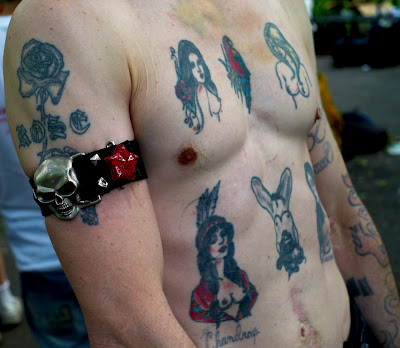 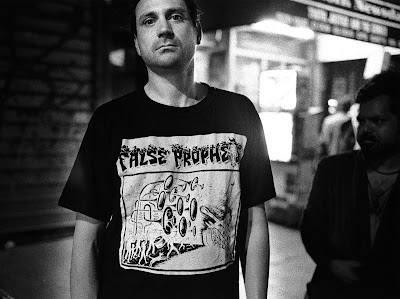 A Wedding for Two of Tompkins Square Park's Own ... ? 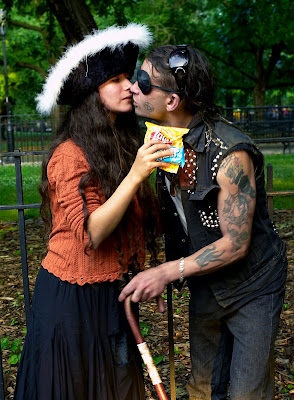 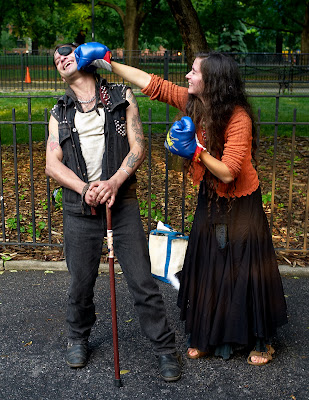 There are books full of advice on this sort of thing . Friends have their opinions . Families certainly chime in with all manner of advice wanted or not ....and finally , in the end , the future is never what you expected . But billions still do it , that is , billions still get married .
It seems that this is what Amy and Jewels are going to do soon , in not quite 2 weeks , the Sunday after next to be exact .
As they are in the midst of all the planning , which grows in complexity with every day , and are busy contacting friends and relatives to tell them of their wedding on the beach which will very likely be a quite un-conventional event , they take some time out above to kiss and spar with gloves .
For now not all detail has been determined but it seems that the ceremony will be somewhere in the Rockaways on the beach Sunday after next . More on all of this later .
# posted by Bob Arihood @ 3:59 AM 1 Comments

Some Saturday Night Scenes From Avenue A... 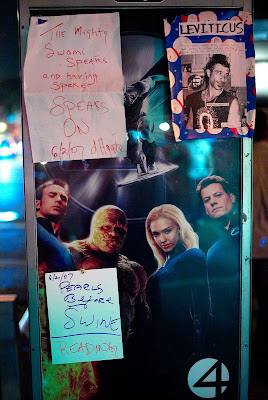 A phone-booth used as a billboard anounces among other things the reading of some poems by the "Mighty Swami " , a.k.a. John Lesko , on avenue A this very evening... 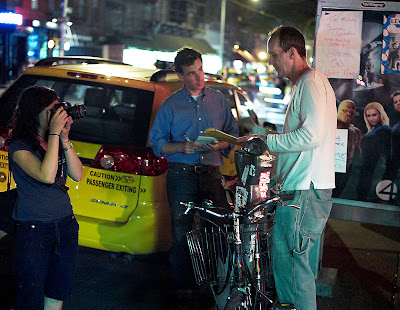 ...and "New York Times"writer Colin Moynihan and photographer Jessica Dimmock interview and photograph Swami as he reads his poetry out front of Ray's . 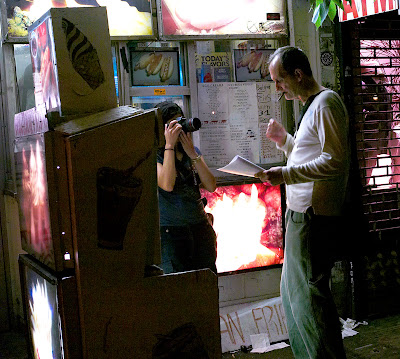 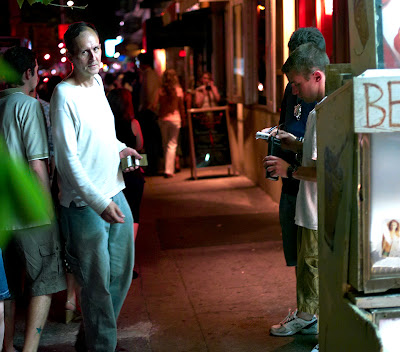 ...and a few minutes later a ticket for Swami for an open container of beer ... 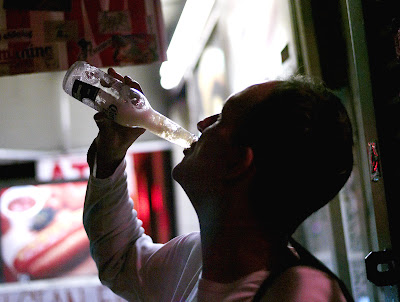 ...but to hell with the cops and to hell with tickets , Swami picks up the beer that he had secreted , while the cops were writing an open-container ticket and checking for warrants , out of the way in the gutter near a car's wheel , and gulps it down at the the front of Ray's Candystore .... 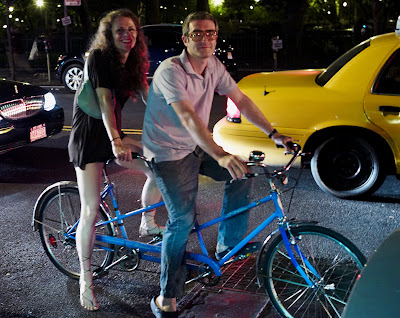 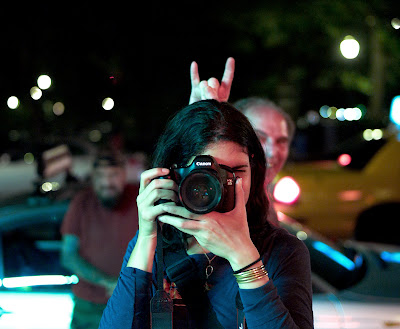 ...camera to camera and prankster jack has some fun ... 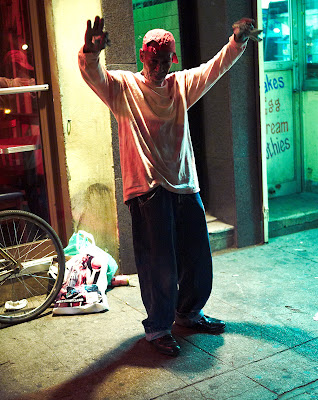 Rock-n-Roll had tap-danced earlier in the evening for a fist-full of dollars. 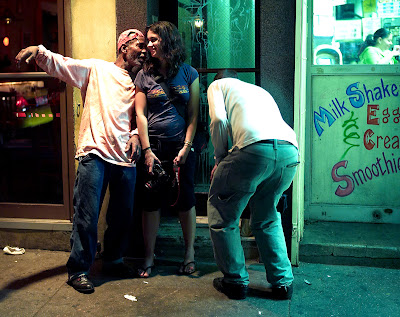 ...something softly spoken that entertains ... 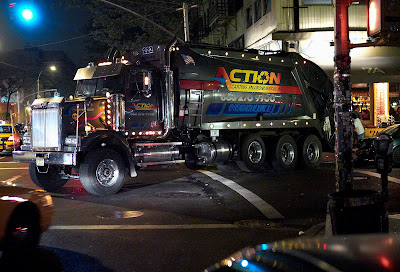 Avenue A being what it is on any Saturday night , someone has to clean-up the mess 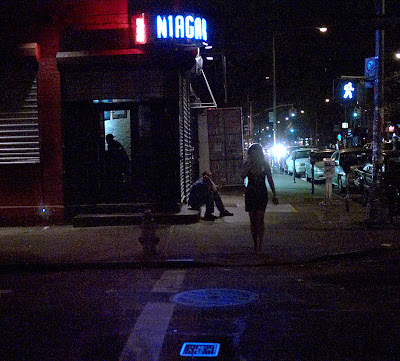 ...and finally an under-exposed and grainy end-of-the-evening scene