Mumia Poster Party on Avenue A... 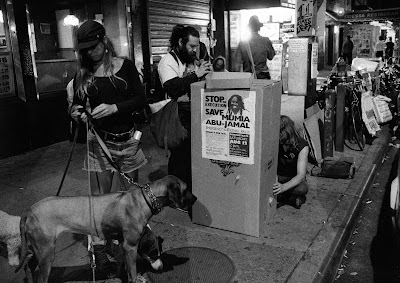 In keeping with the piece of sidewalk out front of Ray's Candystore being a major political protest hotbed in the times pictured above , some of the local Mumia supporters were making posters for several nights and days for the various protests of the government's intention to execute Mumia . Mumia's death sentence was finally overturned and since 1981 he has spent his time in prison serving a life sentence for shooting a police officer .
Whether guilty or innocent we do not know but for all these years efforts to both execute and free Mumia , a former minister of education of the Black Panther party , have continued unabated . Recently on May 17th , a 3 judge panel of the 3rd circuit Federal Court heard arguments arguing that Mumia's trial was unfair because of the predjudicial use by the judge of his power to peremptorially challenge the suitability of jurors . Whether in truth guilty or innocent , if predjudice is shown it would also be necessary to determine whether there should be a new trial . At the same time federal prosecutors are attempting to overturn the lifting of the death sentence .
As always the sideshow of protest goes on with the likes of Chomsky dialoguing and expounding on Mumia and law and order in America while at the other extreme some Philadelphia Republicans are attempting to sue the city of Paris for naming a street after Mumia . Some here at home , uptown , are also attempting to name a street in Harlem after Mumia .
# posted by Bob Arihood @ 4:58 AM 0 Comments 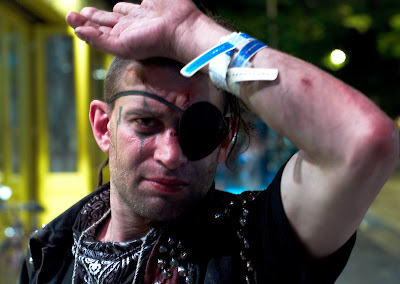 From Playing in Traffic to Detox ... 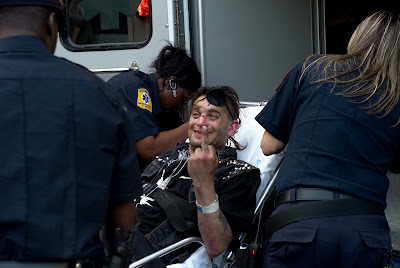 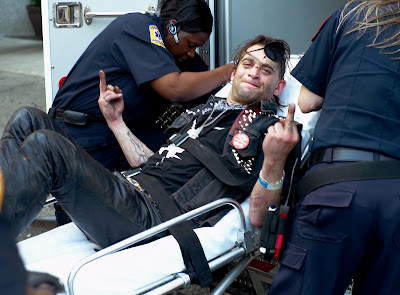 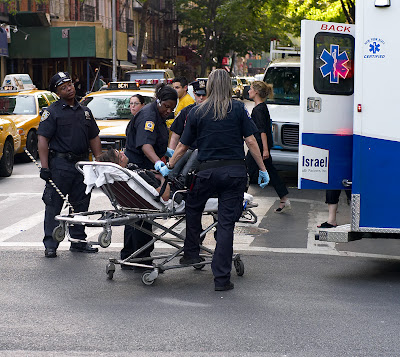 ...again playing in traffic,stopping cars and creating havoc ,and finally taken by cops , put in a bus and sent to detox for however long...
# posted by Bob Arihood @ 7:42 PM 0 Comments 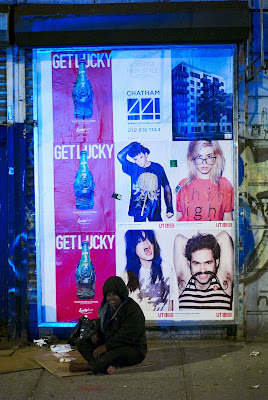 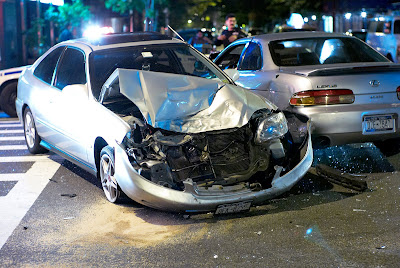 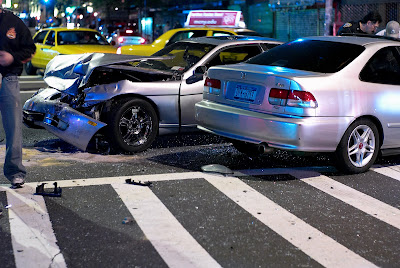 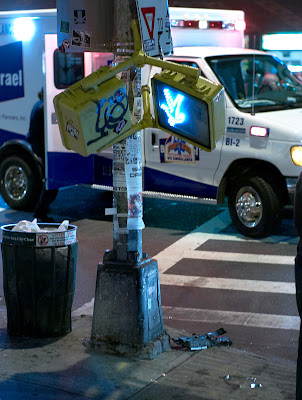 The cross-walk signals were knocked off their pole by a passing city bus that was trying to pass by the crashed cars in the intersection . 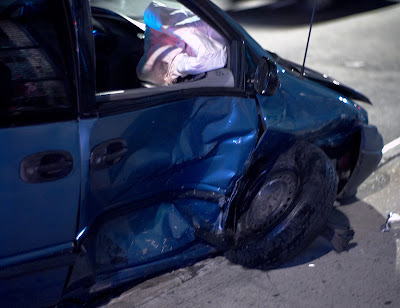 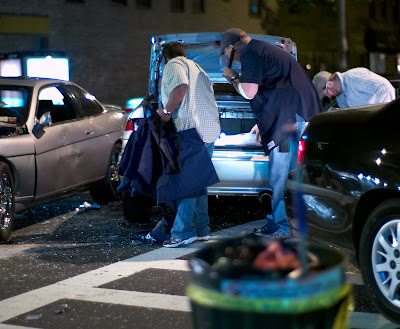 There was something of importance to the police in the trunk of this car which was thoroughly inspected and emptied of some bags and other undetermined items .
At the intersection of 3rd st. and avenue A , early Wednesday morning , just around the corner from our NMNL world headquarters , a rather dramatic auto accident occured which involved 3 vehicles . Judging from the damage at least some of the vehicles had to be traveling at greater than legal velocities .We would be tempted here to surmise that perhaps this was some sort of chase that ended unfavorably .
At this writing it is not known whether there were any injuries , serious or not , though there was an ambulence on the scene which seemed to have someone inside .
As to arrests , witnesses claimed that they saw one man attempt to flee the scene on foot but who was caught by NYPD a short distance from the accident scene. 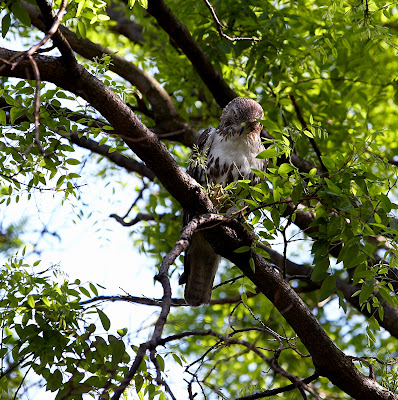 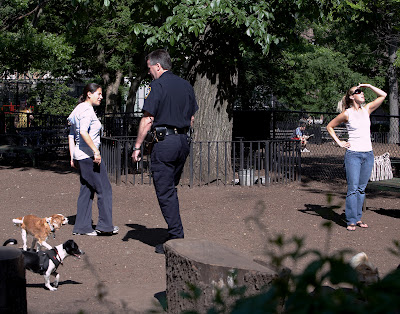 Tuesday afternoon a recently arrived Red Tailed hawk caused something of a commotion in the small dog run in Tompkins Square Park . The frustrated hawk had been hunting unsuccessfully in the park during the afternoon and had just landed in a tree overlooking all the little dogs running about in the small dog run . As this hungry hawk cocked its head just a little and looked down in a calculating manner at all the four-legged morsels , officer Gavin entered the run and advised the dog owners that a hawk was possibly considering one of their little dogs as a most desirable entre for this afternoon's repast .
# posted by Bob Arihood @ 1:48 AM 0 Comments 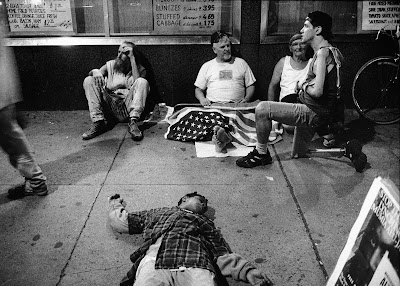 Back in the B&W days when Leshko's was still Leshko's and not Yuca Cafe and a stuffed cabbage dinner was $4.65 , on miserably hot New York City summer nights folks on avenue A just had a few 40 oz. Buds and stretched out on the sidewalk or leaned against a building and dealt with it .
Leshko's and most of the folks above won't ever return but the miserably hot New York City nights will...and soon .
# posted by Bob Arihood @ 10:19 AM 0 Comments

Kicked in the Head Repeatedly in Tompkins Square Park 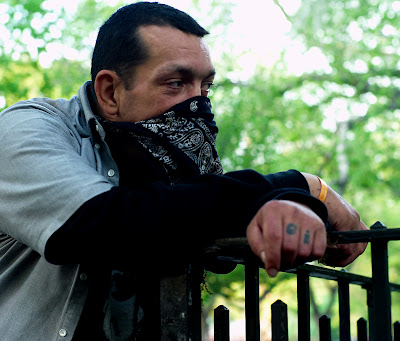 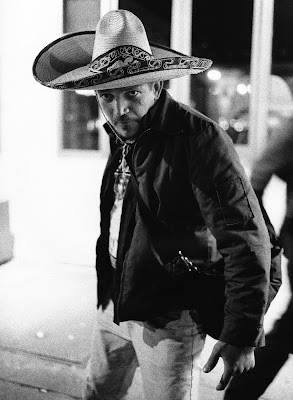 ABOVE : Keith Riley back in the B&W days on avenue A in costume ... 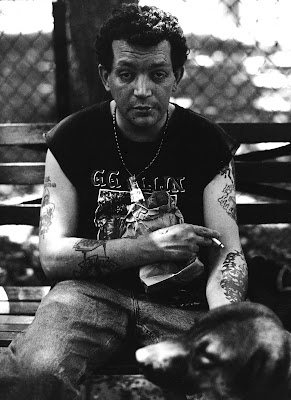 ABOVE : Keith wearing a G.G. Allin T-shirt , again , back in the B&W days in TSP with some County Club and his dog . 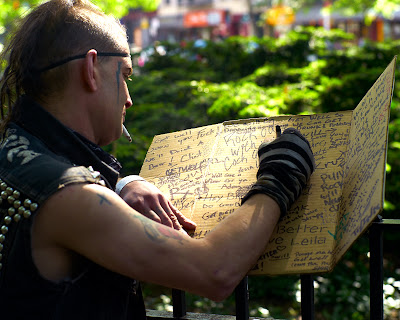 Jewels signs a very large get-well card signed already by many of Keith's friends from TSP, which will be delivered tonight to Keith's room at Bellevue Hospital .
Saturday afternoon near the avenue A side of Tompkins Square Park along a row of park benches known affectionately by some as "death row", Keith "Swill "Riley was severely beaten including being kicked viciously and repeatedly in the head by at least two young men . The cause for the attack is not clear at this writing but some witnesses suggested that there may have been a disagreement over something said concerning long-dead local performance artist G.G. Allin www.ggallin.com .Some of Keith's friends did come to his aid , perhaps saving his life , but much damage had already been done and Keith was taken by ambulence to Bellevue Hospital in critical condition.
To those who know Keith Riley , known in TSP as "Swill ", the beating makes no sense in that Keith is an affable sort , is not at all aggressive and thus would be one of the least likely TSP regulars to be involved in a fight of any kind .
Keith , at last report , is in critical condition at Bellevue Hospital where a few of his friends will tonight deliver a huge get-well card with perhaps 50 or so signatures of his friends from Tompkins Square Park .
At least 2 of Keith's attackers were arrested and are being held by NYPD.


P.S. : 27 May 2007 : Keith Riley's condition today according to some who have visited him is critical but stable . Keith is in an induced coma in the medical intensive care unit at Belevue Hospital . He has very serious and life threatening head injuries with the situation being made much more serious by a poorly functioning liver .
We have been told that there were more than the two arrested individuals involved in the head kicking incident in TSP that injured Keith so severely . There may have been as many as 5 individuals involved .
# posted by Bob Arihood @ 8:01 PM 1 Comments 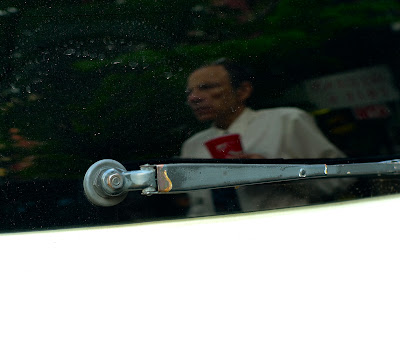 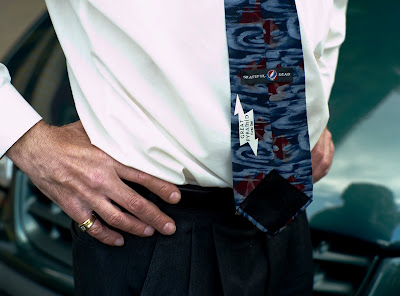 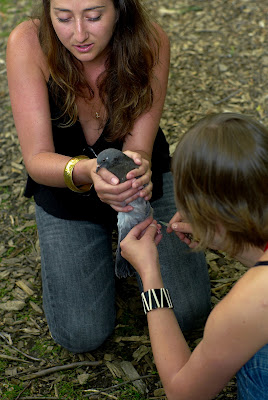 Between L.E.S. Jewels and his cane and some predaceous Red Tailed Hawks , pigeons have not faired well in Tompkins Square Park this last winter and spring . But today things were different for one member of our park fowl : two kind and considerate young women took the initiative and cut some plastic line or cord from this pigeon's legs that had wrapped around it's legs and hobbled it rendering it imobile . When all the line had been removed the pigeon was set free and it flew away to a near-by tree .
# posted by Bob Arihood @ 3:19 AM 0 Comments 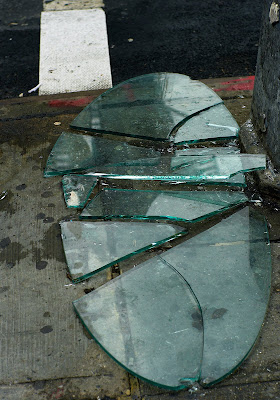