Assault and Robbery on avenue A 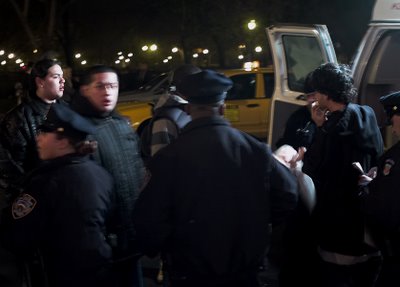 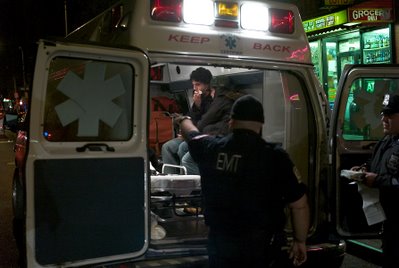 Last night ,Saturday morning at 1:00 AM , on Avenue A in the middle of the block between 7th St. and St. Marks Place , a young man was struck in the mouth and robbed of his cell phone by some in a group of several young males and at least one female all of whom quickly left the scene. The young man , unable to speak , was accompanied by a young woman who related to police what had happened.

The injury was severe enough that as mentioned above the young man had been rendered unable to speak and with considerable blood issuing from his mouth his hand and upper arm had become painted a solid blood red . An ambulance arrived and the young man was removed to an emergency room for medical attention .

Before the ambulance was able to leave the scene though , a group of young males who clearly knew the injured young man gathered at the rear of the ambulence creating a disturbance , displaying considerable agitation and anger . There was some discord with cops before the group ran off into the night in the same direction as the earlier group responsible for the assault , up avenue A .

Felony assaults are up in this part of town and this particular assault may be an example of a kind of assault that we may see more of .According to the statistics that I have seen , most assaults occur outside of bars ... mostly the result of too much drinking .This assault had nothing to do with a bar or likely even drinking .I suspect that this is an assault that is the result of groups of young people ,mostly male ,confronting each other solely for the sake of having a confrontation and doing so in a manner that often leads to some level of combat on the street . Avenue A , an entertainment strip belonging to no one in particular now , is in this case simply a destination , a suitable "turf" for this combat.

Recently a young man was stabbed to death in Union Square Park in such a confrontion of rival groups . A few years back groups on 6th avenue between 3rd and 4th street typically fought it out with varying results . In the Times Square arcades ,which have mostly been closed , groups of youths more than once fatally confronted each other . Groups of young males and females have for ages when provided a turf to battle over ... battled.... and often fatally . I suspect that from what I am seeing on the avenue , from what I know of the past in other locations and the way entertainment scenes evolve in our city , that we are now seeing another new round of violent confrontations on the common ground of avenue A . 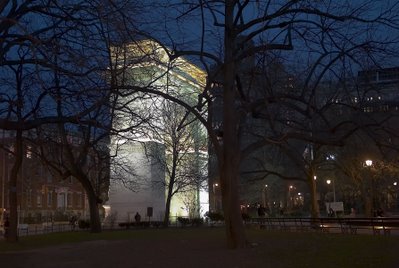 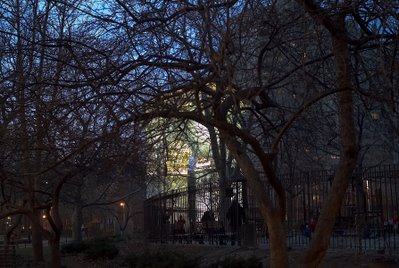 Another Welcome for L.E.S. Jewels 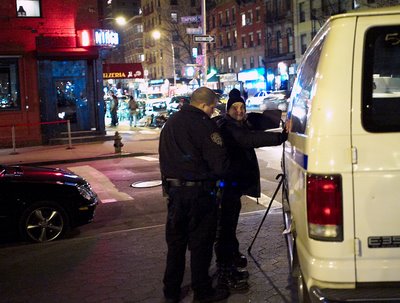 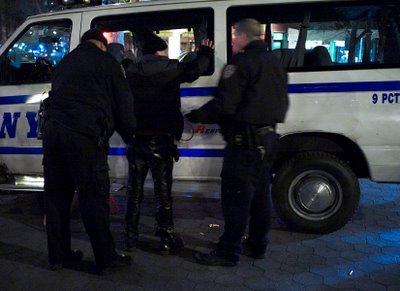 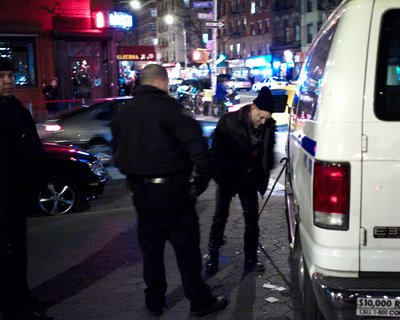 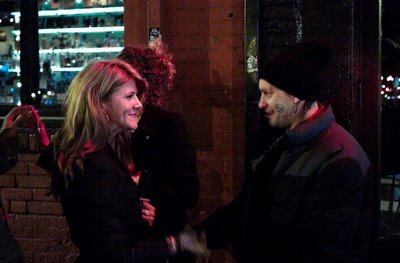 In the last post we saw recently returned Jewels being welcomed back to the neighborhood by Eddie's mom , Adelle .Last night Jewels was taken into custody for a short time at the corner of 7th st. and avenue A . It seems that NYPD also had in mind their own welcoming gesture for Jewels : they asked him to empty his pockets ,spread his legs and let them search him for weapons , all in a hands on personal sort of way . The police found little more than a bottle opener ,which a man that likes to drink on the street actually needs , and let him go .

Across the street at Niagara Bar , curious feminine smokers standing on 7th street were giggly delighted and charmed to meet one of our neighborhoods more notorious characters who had just escaped by the skin of his teeth another possible , but likely brief , incarceration . 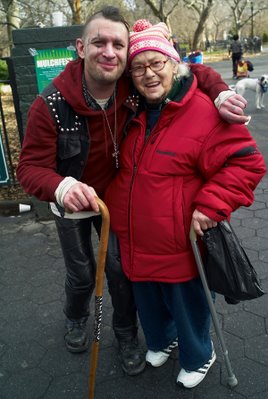 Yes Jewels is back from Philly where he had spent 3 months or so in jail . Last August I posted a story about Jewels ("A Tough August forL.E.S. Jewels" ) and his problems here but I didn't mention that the Philadelphia Police Department would probably be after him for his part in inciting a riot at a punk rock festival (Pointless Fest 2006" ) there this last August . Jewels was I assume picked up here for some reason and later extradited to Philadelphia . Since such an " inicte to riot " charge probably carries more time than 3 months he must have pleaded to a lesser charge and received a lesser time of incarceration.

Above we see him with Adele who has probably helped him at some time in the past . Clearly the welcome home hug shows that they know each other .

Eddie and His Mother Adele 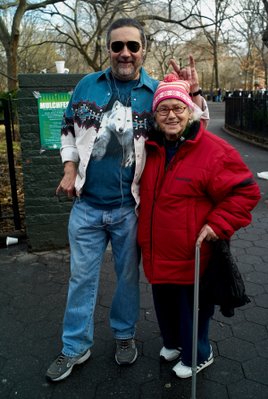 Both long time residents of this community , Eddie is in the construction business and his mom Adele, is a good Samaritan that hands out socks , underware ,blankets ,shoes and warm coats to the homeless in Tompkins Square Park. 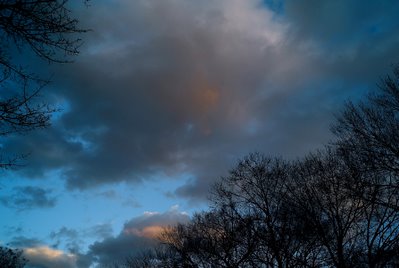 The big one with the pink spot is the one that cloaks the mother ship. 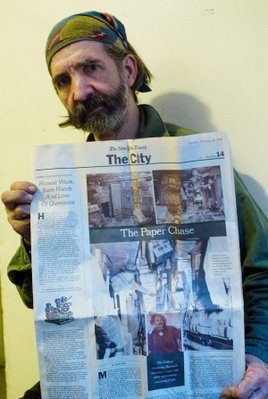 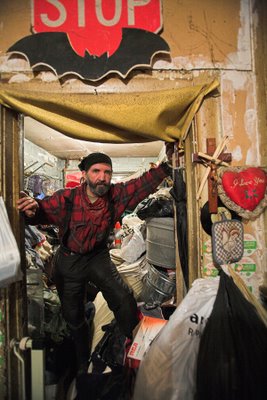 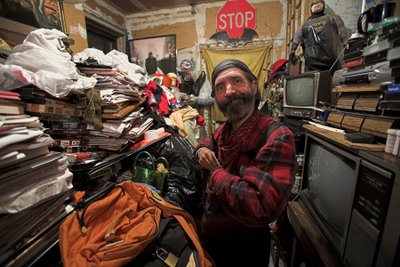 Last week Stanley called me to tell me that he had something that he had found while cleaning out his overstuffed apartment that he wanted me to have . I asked him what it was and he told me that it was the story of the Collyer brothers in the Times . Remembering Stanleys apartment ( see" Stanley's Apartment" on this blog) and its very special quality of being stuffed with a great deal of "God -only -knows-what " , I assumed that he had found something from the time of the Collyer brothers and their infamous overstuffed townhouse .

The Collyer brothers whom Stanley often referred to as sort of kindred spirits ,ones who would have understood his need to stuff an apartment to the ceiling with just "stuff", were two scions of a well -to-do family that lived their lives in a Harlem townhouse stuffed with , in the end, it is said 180 tons of stuff . The brothers died in their townhouse full of stuff , lost to the world .To find the lost brothers the police department looked far and wide over the city and then finally came to the townhouse in Harlem and began removing tons and tons of stuff before uncovering the missing brothers bodies . The effort by the police department and other agencies took weeks and was the source of the still widely known legend of the Collyer brothers .

Stanley's gift wasn't quite what I had expected , being only a New York Times article from 26 October 2003 on the Collyer brothers and their lives of collecting and not something from the earlier actual time of the brothers . None-the-less Stanley was moved by his discovery of this record of the Collyer brothers from among all there is in his apartment ,wonder that it is , and I was honored that he considered me the one to hold the uncovered record of the lives of these kindred spirits of his .