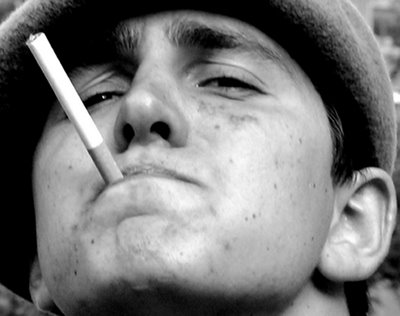 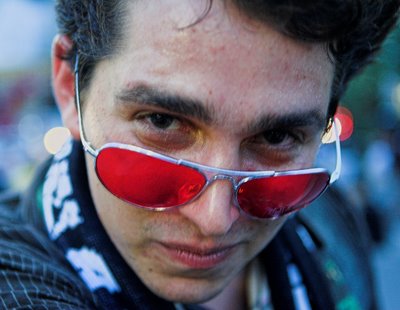 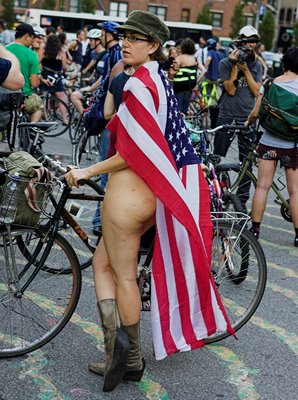 Some got tickets and some got attention as Criticalmass took it's usual last- Friday -of-the -month ride through the streets of downtown NYC . 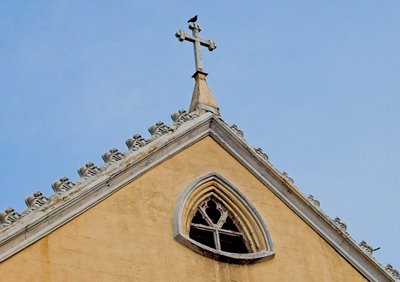 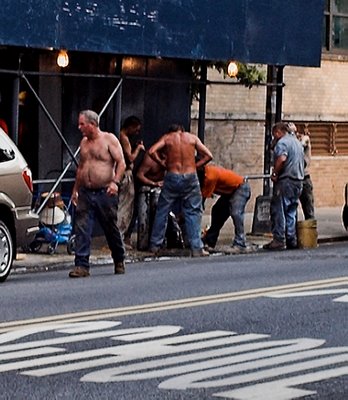 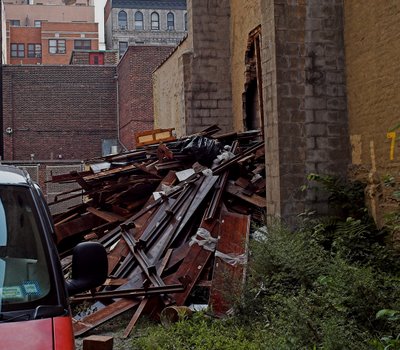 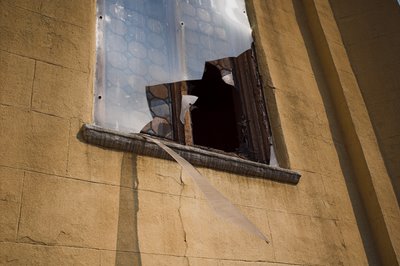 As men washed themselves of the filth of a night and day of demolishing the interior of St. Brigid's , a crow sat cawing and harried by small but agitated and persistant birds atop the Gaelic cross at the peak of the facade of the 1848 landmark church of " Mary of Gael ", St. Brigid , the mother church of the Irish immigrants of the middle 19th century .

I am not a soothsayer and thus can not say what the presence of a crow cawing on a cross at a time like this does presage . Is there some dark fate and certain final loss with this church that we must without choice come to know and if so, should we not protest such fate extremely ? Shall this landmark and icon ,our connection with our past , just perish ? Today , the demolishers punched a hole in a stained glass window for fresh air as they demolished the precious interior and then punched a hole in the back wall of the church to defecate the brutally demolished interior of the church into the lot behind the church .Tommorow all will return to court to decide finally whether this demolishing shall stop .

The community wants this church to be saved ...preserved . But it seems there are now powerful forces dead set against saving this church ; powerful forces , the archdiocese , the bishops and the Cardinal , it seems , want St Brigids reduced to ruble . I do not truly understand why . Some say offers to purchase the church at a fair market price and then return St. Brigid's to the community have been made . It is said that the Cardinal has said no to such offers ,thus , can it be that there is more than just the money value of St. Brigid's demolished that is of concern to the archdiocese . The civil courts and the Landmarks Preservation Committee so far seem to be powerless to save this church . Finally ,why has some one not sought in canon law a path to the good grace and aid of His Holiness the Pope and the mother Church when the community now needs them most ?

P.S 5 August ,2006
Yesterday I learned that indeed the archdiocese does have a plan for the St. Brigids property . The plan is to demolish the church and lease the lot to Cabrini hospital which will build a nursing home for the elderly on the lot . The new building ,I was told, would also include a chapel dedicated to St Brigid . Building such a facility is laudable and is keeping to the purpose of the church to aid and comfort those who require the services of such a facility but it ignores the fact that an offer was made to purchase at market determined value the church and the lot on which it sits . Allowing this purchase would give the archdiocese a large sum of money, indeed a sum sufficient, it would seem , to purchase a lot to lease to Cabrini at some other location thus making it possible to save St. Brigid as the important historical site that it is, one of the oldest surviving buildings in New York City with a long and important history in this old east side community . Various communities as well as the state and federal government and the archdiocese all have had for some time and do still have now an obligation to work together to save this very old and unique historic structure for future generations . 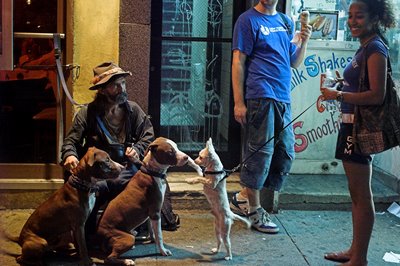 There are lots and lots of dogs in the East Village . Usually they are attended by people wearing flip-flops and drinking bottled water while chortling, cooing , giggling and stating where they are at this or that particular instant on a cell phone . If the picture is any indication of the truth , there may be as many dogs as people .

A camp no more 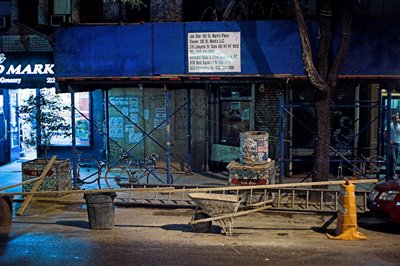 The DOT permit for a laydown area at 120 St.Marks Place is still in effect .The area is still cordoned off by the workers at the site to prevent cars from parking in the area where they will place construction materials and construction waste containers the next day . There are still 3 mosaic planters on the sidewalk at 120 St. Marks Place but there is no campsite for Jim and Jesse Jane . 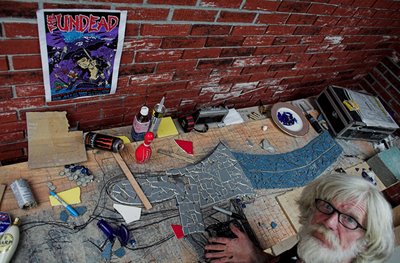 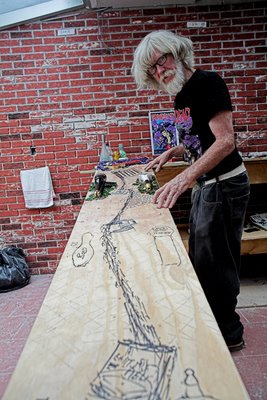 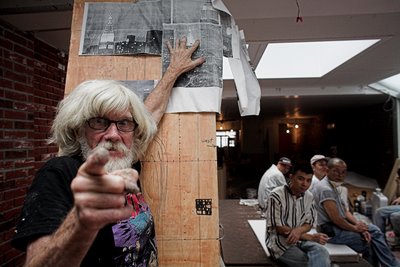 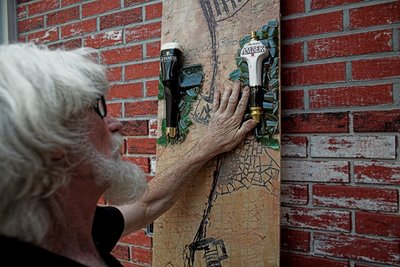 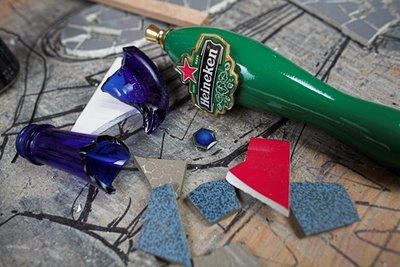 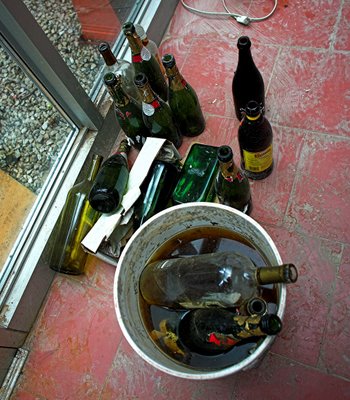 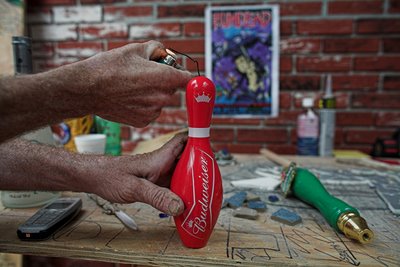 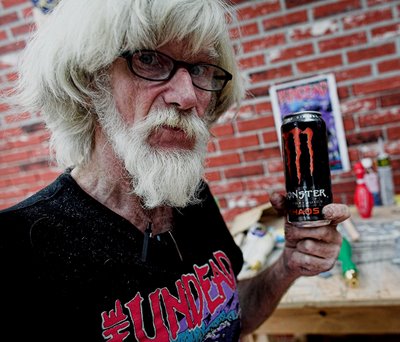 I spent some time with " Mosaic Man " this last Saturday afternoon at his new jobsite which will soon come to be the new bar- reastaurant " The Village Pour House ". Jim was busy laying out and constructing mosaics . He had plenty of bottles and tiles to break up for construction materials . The owner provided the bottles and Bella Tile ,at 11 st. and 1st ave. , provided the tile .He emphatically demonstrated where he was headed with the project and presented a set of well developed , detailed plans that will be used to guide him in the creation of his masterpiece mosaics at the "Village Pour House " . He seems to be un-phased by his recent trials and tribulations ,showing clearly that old signature rebelliousness .... but then how could it be otherwise , it is "Mosaic Man" we write of here. 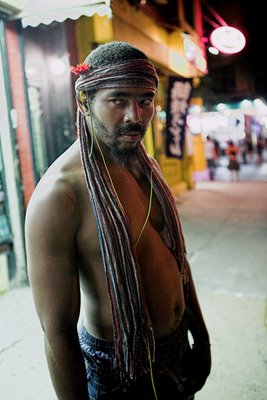 This is "Choice" standing on ave. A last week , a few days after he had put one of the Camacho brothers flat out down in Tompkins Square Park . A number of people had come to me to tell me of the Camacho brothers and the pressure that they were putting on some of the people in the park . Even Jim Power had complained about thier behavior .Some claimed that things were so bad in the park that they were going to talk to the police about the brothers . Most claimed ,though , that the brothers just needed a " tune -up " to help them learn how to live in harmony with others in Tompkins Square Park . According to what "Choice " and others from the park have told me , it seems that at least one of them got that first lesson in achieving greater park harmony .

Not everything at the concert was cool but... 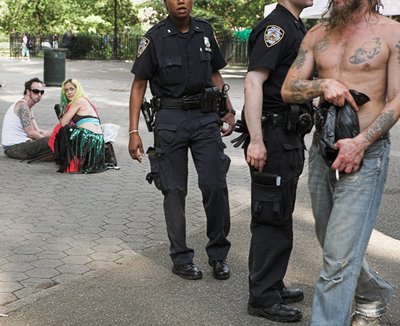 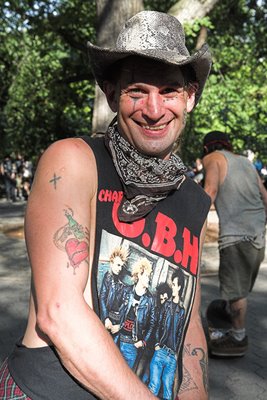 I was told Sunday at the concert in Tompkins Square Park that there may have been one arrest but I saw none of the old Tompkins Square Park riot spirit displayed . There were those ,though , that did take chances and came very close to getting a ride and some free time at a city-owned bed- and- breakfast downtown .

I had heard that Jewels was in jail for no less than throwing a bottle a few days earlier at an NYU student. I learned that the story wasn't true when I found him at the concert smiling . I offered that seeing him was a little dissapointing since I had , on hearing of his bottle -throwing deed , seen him as a sort of hero and East Village patriot .

A little bit of the old East Village 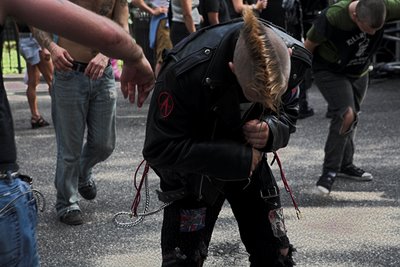 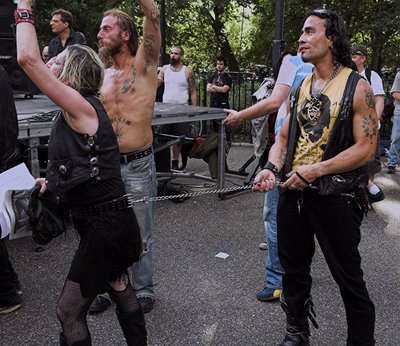 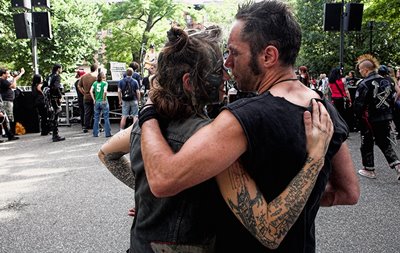 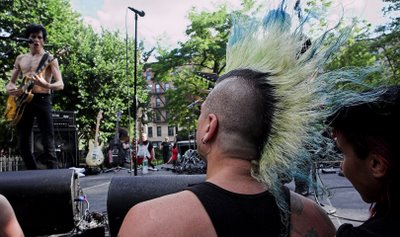 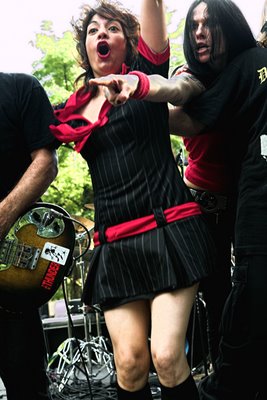 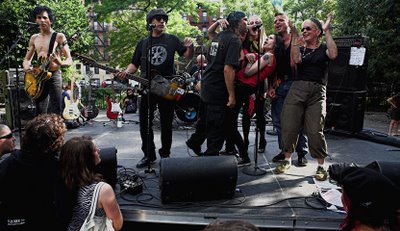 The concert in Tompkins Square Park Sunday afternoon didn't draw all that many people but those that did attend represented some real life bits and peices of the old culture of the East Village .