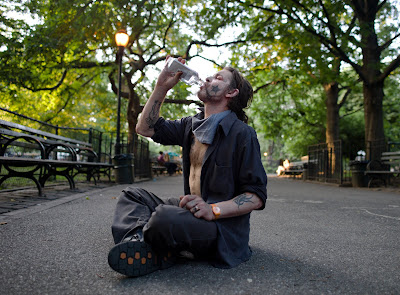 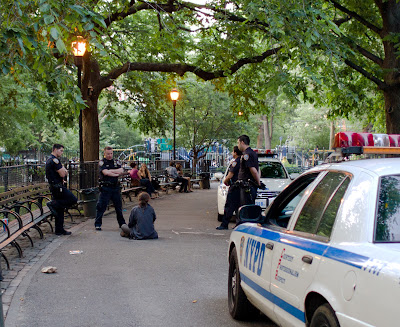 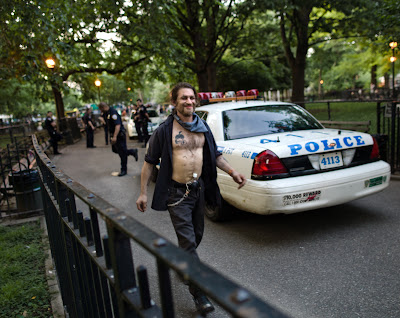 There were no Crustys on Crusty Row Sunday evening . Jewels was there though and called out "take my picture" . We turned and noticed that Jewels had plopped his ass down squarely in front of two women , certainly not Crustys, sitting quietly on the Row .We took a Crusty Row picture as it was Sunday evening  with Jewels alone swilling vodka .

We left for Ray's Candy Store for a roast beef sandwich . As the sandwich was delivered we noticed flashing lights in TSP .Three police cars were moving in the park . We quickly moved , sandwich in hand ,toward the park . By the time that we arrived on the Row the police had entered the Row from both ends and had  Jewels surrounded . Jewels was still flat on his ass in the Row .

Jewels was ordered to stand  and then to leave the Row .As he began to leave he spotted his vodka bottle on the ground  , bent over and grabbed it . One police officer protested saying something to the effect of , drop the bottle . Jewels stuffed the bottle in his belt and high-tailed it out of the park .

Comments:
once again we have the " JOEL PAKELA SHOW" Time and time police time your time used

great so this dipshit continues to flaunt the law whenever he pleases. i drink a 40 on my friend's stoop after a week of work and i get put in the system for 32 hours. makes sense. it's a hell of a town.

The devil doesn't want him in hell, Chris...