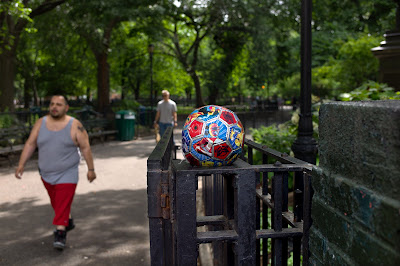 Witnesses that were in Tompkins Square Park Saturday afternoon around 1:30 PM report seeing multiple arrests on the stretch of walkway between the chess tables and Crusty Row .Additionally a press photographer was escorted aggressively out of T.S.P. for having used his cell-cam to photo a portion of one of the arrests.
http://www.youtube.com/watch?v=btuwVZPDPmg
Another male was reported by several witnesses to have been taken into custody for using a cell-cam to video the arrest .

Witnesses claimed that police appeared to have placed a bag of some sort on a park  bench . A white male  was claimed by some to have been arrested for touching the bag. Some though said that this male was released . The press photographer showed us  the image of this male on his cell phone .The image was  of a white male with a noticeable tattoo , appearing to be in police custody . The press photographer noted that he thought that the male was released because he was actually part of the police team working with the bag .

In response to the aggressive removal of this press photographer 4 journalist , one writer and 3 photographers , from 2 of New York's 4 major papers spent part of Sunday morning on this stretch of walkway between the chess tables and Crusty row .

Lisa whose tribulations we noted here in 2 earlier posts concerning the TSP chess tables was also arrested . Sunday evening , after her release ,  we spoke with Lisa . She claims that she had warned an older Russian woman  to not touch the bag .She believes that undercover officers heard this brief conversation and an unmarked car was soon at the scene to arrest Lisa . She was cuffed and taken away . Lisa claims that at her arraignment the judge dismissed the charge of interfering with governmental administration  quickly with time served . She noted that the judge stuttered when she read the word Tompkins Square Park .

We've recently also learned  from others that the charge for which Lisa was taken into custody while sitting at the chess tables not playing chess was a disorderly conduct charge resulting from sitting at a T.S.P. chess table while not playing chess .The  warrants for which Deputy Commissioner Browne  claims Lisa was arrested
http://blogs.villagevoice.com/runninscared/2011/06/woman_not_arres.php
were found only later after Lisa had been taken in to custody for disorderly conduct. Now the mystery is actually solved .