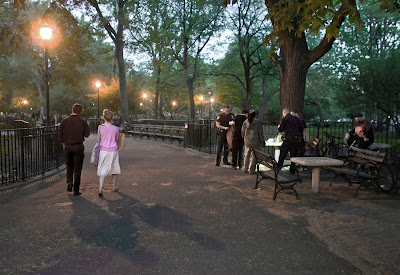 Comments:
I'm glad nobody got a ticket and that they got their booze back. A cop once poured a freshly opened Bud tallboy out he took from me on the ground. Now THAT'S police brutality!

Marty , I've seen my beer spilled too its always a brutal tragedy... even if wasn't cops that spilled it .

They were checking I.D. and searching guys on the basketball courts too.

I think they got a tip that Bin Laden was still alive and in the area....

At least it was a nice day in the park, I assume the cops were looking for something or someone. I am way too scared to go over by that park or anywhere near Avenue A or B. I once went to Ave C, and the most I ever saw of Ave D was on a map, Im soooo scared of that place.