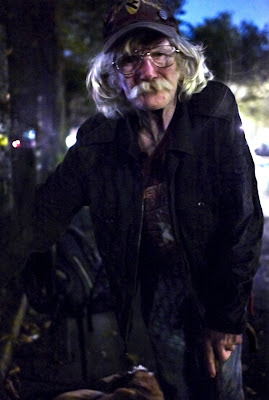 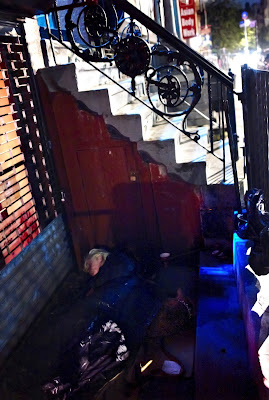 We found Jim tonight in a dark and out of the way corner of Tompkins Square Park resting with Jesse Jane and another homeless man . True safety is a luxury that Jim can't afford . Jim has to settle for a few moments of peace here and there as he can find it . In the park he is constantly on the lookout for one or another group of young men that might attack him . There really isn't any place safe at night if you are homeless on the streets of the East village .
Tonight some young males had been running in the park . Jim had watched them intently as they ran the park . At one point they spent some time playing , rough housing it on the new play equipment in the new children's playground at 9th and avenue A . Jim noted that he had seen several times before such behavior by groups of young males in this playground .
After the park closed at midnight he spent a short time at Ray's Candy Store then moved on to find a new , relatively safe place to sleep with his dog Jesse Jane . He asked us to check on him before we went home and also to photograph him and his dog sleeping which we did .
# posted by Bob Arihood @ 3:21 AM

Comments:
Jim is a good human being. When my son and I see him in Tompkins, he always let my son pet Jane. He's very gentle mannered person, and his mosaic art is simply beautiful.

As a parent who visit Tompkins Sq playground daily, that youth groups roughhousing the playground are really a pain. Recently they were terrorizing little kids at sprinkler by splashing water at each other, screaming obnoxious things. I stepped up and told them to get out, and they said "Fuck you dis a public playground",
though they ran away after I told them I was gonna call a cop.

i saw jim and jesse jane outside of ray's at around 8:30 this evening. i worried about them, wondering if they had a place to stay, wishing i had something to offer. it's kills me that his work was recently featured on the cover of a popular local publication with a huge circulation, yet he lives such a precarious existence.