Marlene Returns to the Street ... 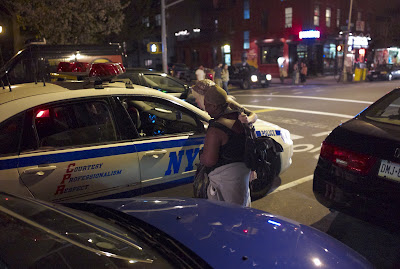 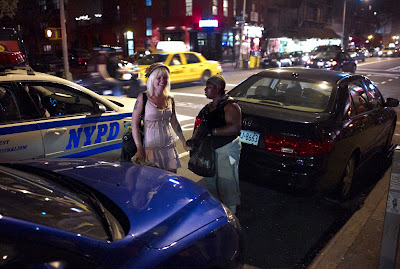 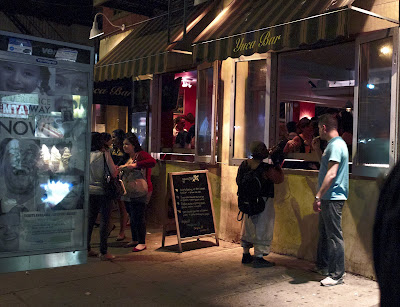 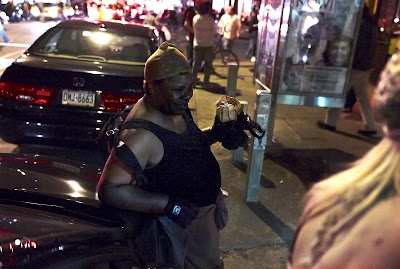 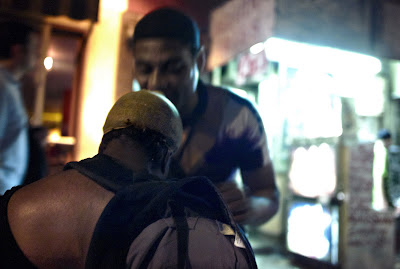 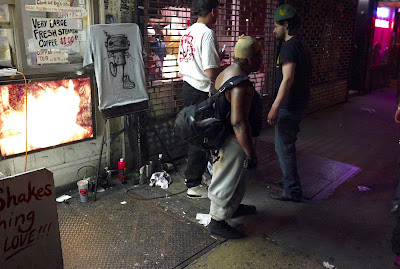 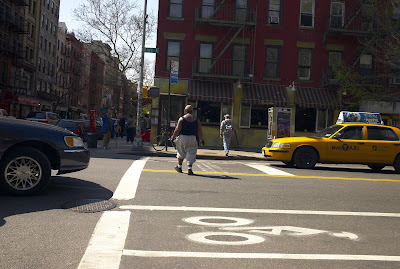 Marlene had a place to live ; a place to live off the street . Marlene trusted a man who led her astray . Now Marlene lives on the street .
Living on the street is not a new experience for Marlene . Known to many as "Hot Dog", Marlene had spent many years living on the street but she had for the last year or so been living in a residence on the Bowery .
Whatever happened , likely something involving drinking and violations of her residence's rules , she was brought to today's situation by her association with an unreliable man . A man who Marlene says took her out in his van and partied with her . She had a good time but it cost her a roof-over-her-head , free meals and a soft bed . She also was waiting for her "package" to go through the system so that she could get a room of her own somewhere . Marlene lost it all because of a bum with some beers and a set of wheels .
Marlene now spends a lot of her time near the corner of St Marks Place and 2nd avenue spanging . She often wears a blue wig . She says that the people over there treat her well . Some of the restaurants feed her . She says that there are fewer of the Tompkins Square Park trouble makers over there to give her problems . Marlene says that the police in that area treat her well also . With 20 years or so of street life behind her Marlene has known much worse times .
Friday afternoon Marlene was on avenue A . A cab and some pedestrians irritated her while she was trying to cross--beer in hand --the avenue . She perfunctorily "Mooned" them all and walked on , crossing the avenue . She had been in TSP and had drank a few beers and just wanted to cross the avenue . The spanging was good on the far side of avenue A and there were some old friends there to hang with .
By night fall with the avenue alive with all kinds of folks , Marlene , after all those afternoon beers , was well prepared for a night of more drinking , hell raising and generally mischievous fun . Marlene slept on the avenue A sidewalk Friday night .

Comments:
It was warm out and it was party time!!

So the message is men are liars and destructive to women you included?

Any women think that about you?

You already know the answer "anonymous". Why bother to ask ?

now im not the biggest dirt bag out there, but this lady is a low life, i have constantly witnessed her demanding 2 dollars and other outrageous sums. the problem with almost everyone on avenue a, is not only there inability to grow, but there disrespect for a little thing know as "generosity." by nature, i am entitled to keep what is mine, dole out what is mine, in whatever way i see fit. yet, the classy ladies and gentleman off avenue a think that anything below a dollar is equivalent to spitting on them. you see, i work, i get up and i go out and i earn a living, now why in my right mind would i give ANY money to street trash who don't give a fuck about anything? in short, the homeless people on avenue a aren't the last "true," "real deal" items in this great neighborhood. to me, they are trash, its always someone else's fault that they are drunk, high, homeless, violent. nobody wants to live a square life, but most people have the slightest amount of fucking decency to not go and demand things from others, lots of people get high, drunk, bug out, get zooted, they don't all become avenue a dirt bags.

Hey I Love Hot Dog. She has been here forever if we didn't people like her the world be a boring place with nothing to look at. It is like watching a funny sitcom but outside in the fresh air of the world. Hot Dog rules.

Also there is Eden again on Avenue A. Is she drunk too. HaHa. I love Eden

This is for "FAYCB"...Just go and hang yourself immediately!!! I promise that the pain will end quickly!!!!

I was sober! I swear on the bottle of wine I had that night!

crazy jay? the biggest pants? you don't know shit about this neighborhood, c squat bum ass motherfuckers, that place is a dump. you have no respect for yourselves, the community, the preservation of that community. crazy jay, you ever stop to read what you write you unintelligible bastard, you sound like a pathetic, do nothing, conspiracy theory believing cheese ball. how are these people genuine? by begging for money, being derelicts, harassing people who have done nothing to them. you wanna talk about "neighborhood" people, people who "deserve" respect, clayton patterson, jim powers, these people have put in work around these parts. being a drunk, asking for money, and in general only caring about yourself aren't the best traits to have. and the suicide comment, come on now, how old are you kid? at the end of the day, it is what it is , jay, you have no opinion or leg to stand on, go fuck yourself. hopefully they condemn c-squat. urban home steading, look that up, thats what non freeloading genuine people used to do.

Thank you "Biggest Pants";this "FAYCB" has a personality like something you wipe off of the bottom of your shoe! Marlene,and Eden are the best! Drunk on Avenue-A or what have you!!!!

Hey "FAYCB" I have been in New York going on 37 years and in The Lower East Side and C Squat going on 20 years so don't give me that shit. I work on my house and this neighborhood to make it a better place. But small minded idiots like you bring it down. Go away we hate you. I will be here long after you are gone. Peace.

Hey Bob sorry for the arguing on you blog. But that "FAYCB" makes me mad. He is obvious to the real world he only believes what he sees in his minds eye. He needs to take a step back and look without his one sided view. Thanks.

funny thing is - FAYCB/CMAR is the only one whining, err 'crying' on here.

whatever. i like my annoying spanging drink-stealing avenue a (and beyond) folks. keeps my day brighter knowing i have some annoying hilarity around me. and lord knows it ain't just avenue a. 3rd street/2nd avenue/etc got them too. not to mention half of the other job-having moochy folks in this city. moochin' on the street, moochin other ways - its all the same game, FAYCB.

i had a long thought out, written out answer to you all, but then i realized something, like the sky opened up and shit. biggest pants,, marlene's entertainment to you? how cruel does that sound? these are people, albeit lowlifes, scum, drunks, derels, pushers, pimps, all that shit, but they are still human. so to all of you who find "amusement" and "hilarity" in these people by laughing at their antics, i say you are no better than you think i am, and by the by, fuck you you 37 year veteran of this neighborhood, that don't mean shiiiit, when you don't contribute shiiiit.

"you know who said..." you are still an dumb ass no nothing jerk. people you are the reason why the world is the way it is. you think you are better than everyone but you are not, you are garbage and nothing will ever change the way you are. What have you done lately nothing but bitch and bitch because things don't go the way you want. You will be never be happy thinking the way you do, you will always be a sad lonely individual. I hope that someday something puts a smile on your face. You jaded moron.

"Biggest Pants"...you are the best dude!! "FAYCB",and,"Cry me a river",and/or "You know who";"no identity" crisis freak!!! I may not seem like much in your jaded eyes,but at least I know who I am ass wipe...I am Crazy Jay! I will be on Avenue A...long after you're gone...and I guess that won't be long since the family trust fund has run out! Sorry that your family fortune has been depleted,and you have no more support. I guess this is why you get so butt hurt when someone asks you for change on the Avenue...I am done with you!!! You are so fucking pathetic!!!! P.S...not to be redundant but,"Kill yourself asshole"!!!!

where is hot dog? been raining a lot lately.

'eh, i laugh at others antics because i laugh at my own. if i didn't i do believe i would have already succumbed to life's hardships and killed my soul a thousand times over.

in each depressing depraved antic-filled story i have created, i find something uplifting and moving. sure, i've regretted many of those days/nights but in the end, i wouldn't trade in those moments.
they've propelled me just a bit more to live, care and coexist. i don't believe the same is true for *all* other people - but i'm sure for some people i laugh with, it is true. and for those for which it isn't true, i hope that their situation can get to where they want it...

done with finals in 2/3weeks and ill have so much more free time...thankfully.

ps. this has been bothering me too - i was under the impression c-squat was an urban homestead (along with those other formerly-squated buildings). unless you insist upon the "self-sustainable" definition of homestead which in that instance, ok, i doubt its self-sustainable. but really, what building in this city could be? if you know of one, let me know. tho - there are those co-housing places but frankly, i think i'm too much of a "like to be by myself" person for those situations.

Marlene is sweet and made me feel better this Motherless Mother's Day-she gave me a hug.
I can see that reporting violence can get to a person. Some of the stuff makes me cry..someone oding is sad-but it is a good reporter who can give the facts correctly and take the photos expertly--that's you,Bob.

Marlene,I never knew that was Hotdog's name.
I've watched her come and go for the past 17 years, seen her body change/age, hug then punch a stranger in the span of 60 seconds, she seems to have gone blind in one eye. She's tried to push my baby off my bike then yell at people not making way for me. I've grown up/old with her. Someone to mark time and memories with..
GOD bless Marlene and all her comrades/daemons. She's not changing.

If you have not seen her dark side, you are very lucky. She has a reputation for attacking people with absolutely no reason. I have seen it and had it happen to me. She may have a nice side, but don't get too comfy with her.

Ask the police, they know her well....with her assault history. The police say she is getting worse and worse.