Concerning the Handling of Flags .... 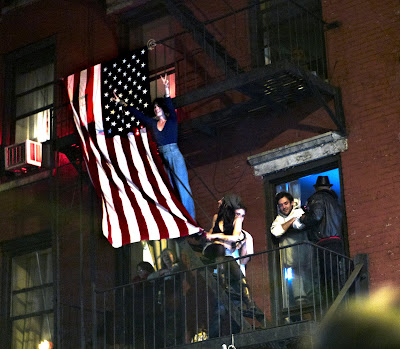 Flag burning was an East Village tradition . For as long as we can remember in this part of town in our public park , Tompkins Square Park , the Flag was burned pretty much as often as not . Recent events though seem to indicate a change of attitudes in the matter of handling the Flag .
The new downtown crowd doesn't seem to share the traditional attitude toward the Flag . As above on election night the Flag was displayed ; not burned but sung to .
According to Slum Goddess local Slacktivists may take us back at least one more time to the ways of yore this Saturday night in TSP .
http://slumgoddess.blogspot.com/2009/01/slacktavists-celebrate-pagans-passing.html
# posted by Bob Arihood @ 2:04 AM

Comments:
Death by firing squad to all those who dare to sing to the flag!!!!

Will someone please BURN that fucking thing already????

Hipster scum is worse than Yuppie scum. These guys should move back to Portland.