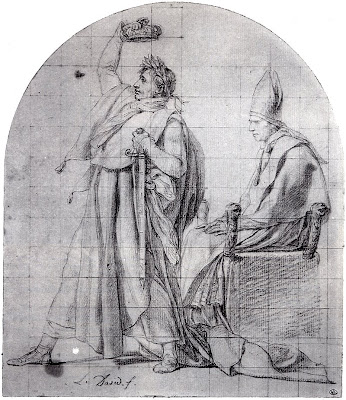 The emperor Napoleon crowns himself by Jacques Louis David

At least Napoleon had the balls to just take the crown himself and place it on his own head .

Our noticeably megalomaniacal Mayor Mike seems to believe so much in his exceptional capacities for governing that he is thus irreplaceable and that it is necessary for the salvation of New York City for him to remain in office .

Unlike Napoleon though he has chosen the same path to enduring power that was chosen by the likes of a more subtly calculating Hugo Chavez , Benito Mussolini or Adolf Hitler ; to name a few of our better known tyrants . These guys , though less brazenly than the ballsy Emperor , all chose to continue their reigns by doing whatever was necessary to make it appear as though they had gathered the will of the people to support a legitimate continuing personal political administration . These men all claimed that they were charged to rule more or less permanently , and legitimately so , by the will of the people as manifested in certain exceptional elections . This is what our mayor hopes to do by simply and very conveniently changing some law . .. and there will be appropriately placed gifts as inducements to vote in his favor , there always are with this mayor .

As was the case with Mr. Mussolini and Mr. Hitler , the business elite is also enthusiastically supportive of Mayor Mike's extended reign . Nothing new here , it was so in Gaius Julius Caesar's Rome too.

Does anyone remember that our first president , general George Washington , in times much more difficult than ours today ,with America's continued existence more threatened and uncertain , disbanded much of his continental army and also refused a third term as president . This aristocrat political leader put his faith in the people , democratic principles and a body of law and not himself to provide for and ensure the continued existence of America .

Comments:
maybe jewels should be mayor, did you ever think of that

Haven't seen Jewels lately..is he ok??
In some places drinking too much is a rite of passage and not keeping your pants on--well that is ok I guess if it is done in the privacy of the White House--

I finally figured out why Mayor Mike wants to increase term limits--he may finally NEED a JOB!

Yeah , a real possibility . His worth has droped to what ? Certainly something less than his $22 billion before the collapse.

Interesting that he bought back the remaining piece of his company that he did not own from Merrill Lynch just a few weeks before the collapse , isn't it ?