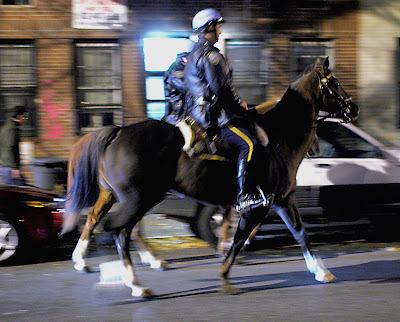 On 6 Nov. 2004 in Tompkins Square Park , NYPD called for a major mobilization , including helicopters , horses from the mounted patrol , large numbers of regular officers and several others of the NYPD special units . The reason for the mobilization : a riot was in progress . 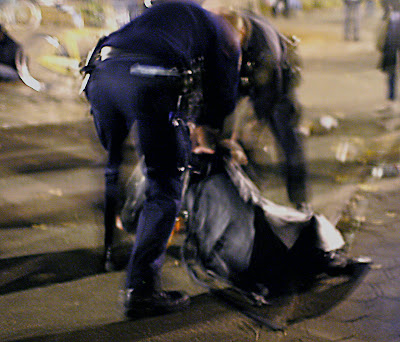 It all began here at 6:03 pm with the above arrest . A young man is arrested for drinking a beer .

At the very end of a TSP concert , the permit ended at 6:0o pm , 2 officers were entering the centeral area of TSP where the concert was held ,to shut down the sound system and to supervise the area as those who had attended the concert left the area .

As the 2 police officers entered the area they encountered a young man drinking a beer . They politely requested ( we saw this ) that this young man pour out his beer and deposit the can in a trash recepticle . Well , the young man was not in the mood to surrender anything , especially his beer , to the cops . The police officers attempted to take the beer from the young man ; there was a scuffle ending with cuffs on the young man and a riot to follow envolving perhaps 150 anrgy concert-goers .

Many of those who had attended the concert were at the end of the event well soused . The concert had been largely un-policed and thus mass quantities of the hoppy , alcholic beveredges , beer and malt liquor the favorite , had been consumed .

Indeed during the concert we saw several full beer containers fly through the air , striking and injuring people . Bloody scalps and faces were seen . People were seen diving from the stage into the crowd but the crowd was not catching everyone ; those who were missed were seen crawling , bloody, on hands knees between the legs of the crowd making there way to the sidelines to nurse their wounds. Some folks were so well pickled that they had to lean against each other just to remain standing upright . 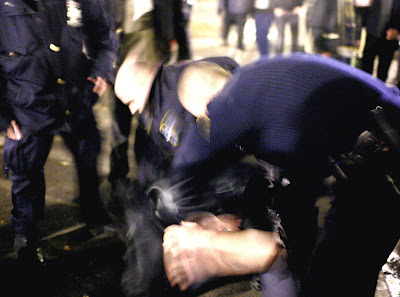 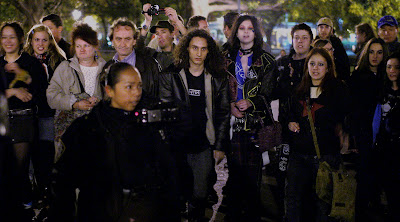 Above a young man is subdued for allegedly breaking a 40 oz. beer bottle on the window of a police vehicle . At this time a hail of beer bottles , mostly 40 oz. in size , was directed in the direction of these police officers . 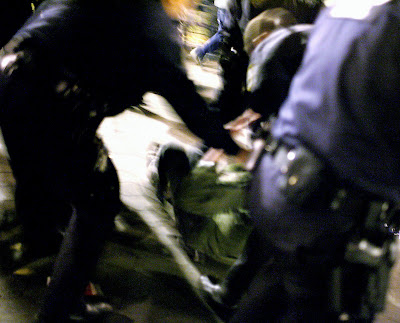 We have seen many a riot , Chicago in 1968 , Chicago and the Weather Underground's "Days of Rage" in 1969 , the Tompkins Square Park Riots 1988 through 1994 and others in other cities , but only rarely had we seen rioters actually run at and tackle police officers . Above a man is subdued who along with several other concert-goers had run at and tackled police officers . 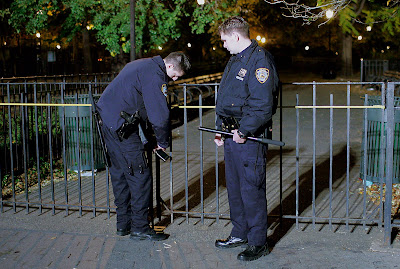 By 6:30 most of the angry , contentious crowd had been removed from the park . The gates are closed .
Some further combat continued to occur outside the park on the streets for perhaps 45 minutes , mostly on St. Marks Place . 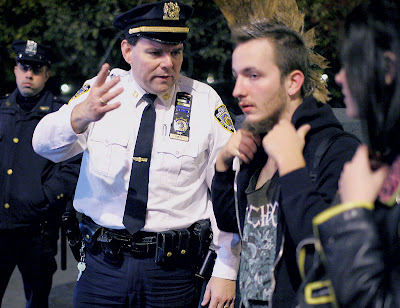 A captain explains that the park is closed and that all persons are to leave the area .