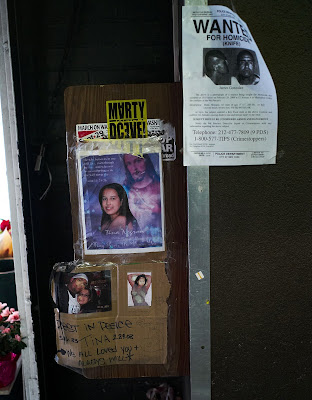 P.S. 08 04 01 : We have learned that a few hours before this tragic image was posted James Gonzales was captured in Florida . His location was reported to police by someone that had seen his picture on "America's Most Wanted " TV program .
The community should thank community member John Penley for his efforts to get "America's Most Wanted " to present images of Mr. Gonzales for all of America to see .
# posted by Bob Arihood @ 7:17 PM

Comments:
So sad. It angers me that they haven't caught this guy yet. If he's homeless how far could he get to?

Unless some people "took care" of him already.

Yes he was captured in Florida .