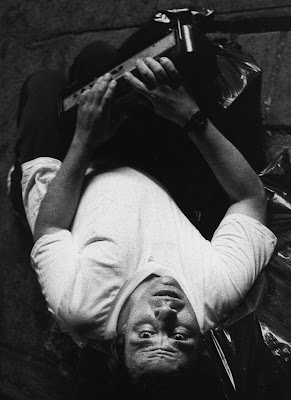 Ron lived in Riverdale with his mother . For close to 20 years Ron made the long trip downtown to 113 avenue A , Ray's Candy Store . Ron was one of the regulars at Ray's , a member of the special society that could only exist at Ray's , a member with special standing .
Ron met Ray while selling him wholesale film , batteries and other odds-and-ends for his candy store business . A friendship grew with Ray and Ron started comming to Ray's not just to sell film and batteries but to hang-out into the night with Ray and all the other very special regular patrons of his candy store .
We spent many a crazy evening with Ron at Ray's back in the days when all sorts of interesting things still regularly happened in the neighborhood ... when people still regularly socialized at candy stores .
A few years ago Ron developed a problem sleeping . No matter how many doctors and how many different prescriptions for sleeping potions , Ron just could not sleep . By chance one night , a miracle-of-miracles , Ron spread out on Ray's garbage bags and fell asleep . From that night on , on many a night when sleep by any other means was impossible , in the midst of the clamor and chaos of avenue A , Ron could be seen sleeping like a baby , all comfy on a stack of Ray's cleanly bagged garbage .
But for a few visits last summer Ron had been absent from Ray's for the last 4 or 5 years . On his few brief visits last summer many noticed that Ron was not feeling well . Sadly sometime late last year Ron passed away .
Perhaps the picture above seems a little odd for what is a bit of an obituary . Odd as it is though you'll likely remember the up-side-down guy who could only sleep when well nested among Ray's bags of garbage ...and thats the point of this ; to remember Ron .
# posted by Bob Arihood @ 12:45 AM