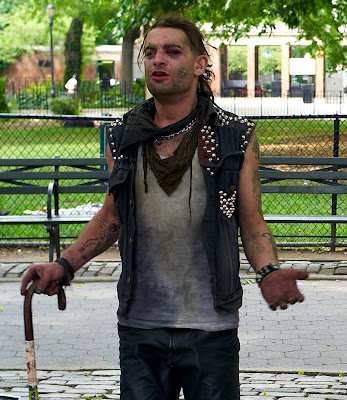 Very fittingly singing " I fight to lose " with a band that was practicing in Tompkins Square Park 5 days before his arrest one can easily see the results of a drunken rampage lasting several days . The filthy , beaten , exhausted and drunken Jewels has forced himself into the midst of a band that does not want anything to do with him .
Very noticeably sporting a black eye resulting from a private Tompkins Square Park beating intended as a summary punishment for stiking Keith Riley in the head with his cane the day before , Jewels continues his rampage against anyone that he believes he can intimidate including these tolerant band members some of whom he later struck with his cane when the band members finally asked Jewels to shut-up and leave .
After this several day long rampage there were 4 days of sobriety and rest but on the fifth day it was a return to the same old routine : a one day long drunken rampage . This time the punishment was not a local group delivering summary justice for inappropriate behaviour but an arrest by NYPD with a trip to jail .
The last day of rampage and its end with Jewel's arrest can be seen in a previous July , 2007 post here on NMNL .
According to the records that we have access to , Jewels , a.k.a. Joel Pakela , will appear on 28 August , 2007 before judge Ward in the criminal division of the Supreme Court of the state of New York in Manhattan .
Jewels is according to our sources charged with one count of attempted assault with intent to cause physical injury .This seems to be a combination of charges that has been pleaded down from one including a more serious additional attempted robbery charge .
# posted by Bob Arihood @ 10:36 PM

Comments:
If Charles Dickens was alive in the East Village today, there is no doubt that Jewels would inspiration for a character....

As I walk past the characters photograhed by Bob Arihood I "see" them and it is like my own internal "read" I find more interesting than than the boring mega bucks films that require no imagination or depth but simple consumption. Mega-speed builds to mega crap just about everything has harmed our 'hood and our far more in terms of the big picture... making Jewels look a poster boy for health.

I will miss not seeing photos of him on your blog although in real life his actions and behavior were disturbing but nothing compared to NYU's mega dorming of the East Village to death, the large group of suicides and not horrifying death of a young woman on NYU property...etc.

Jewels looks wholesome compared to the the "mega big picture" not documented on your blog site.

Everybody serves a purpose in one way or another....
I think the antics of L.E.S. jewels are just a fuckin riot!!!
I laugh my ass off when I read about the crazy things he does. Another person may call me insensitive and heartless but i'm not about to let that stop me from enjoying it.
People have been laughing at the town drunk for centuries and L.E.S.
should be considered a WORLD-CLASS drunk.
They should bring back the old "I love New York" commercials and
put L.E.S. in it!!
I say laugh at him
He's been offered help and he does'nt want it right now.
Since he chooses to be a filthy clown, then laugh at him!
L.E.S. jewels is NOT society's problem. He is his own problem as well as a problem for others until a miracle takes place.

Randy, you're a real jackass. I've known Joel for almost 20 years, drank with him and his father, had dinner at his grandmother's house, and I will tell you he is the most loyal, caring friend you could ask for. laugh at him? What do you know about his pain? I know, and I'm not telling the likes of you. He's lucky to be alive, what he's been through and put himself through. He's not some clown for your amusement, you bastards.