While I was off taking pictures of bullet holes ... 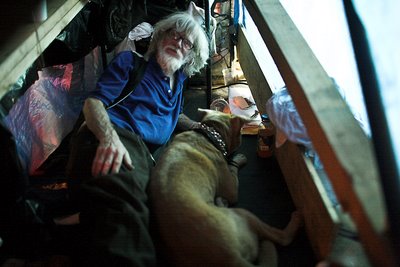 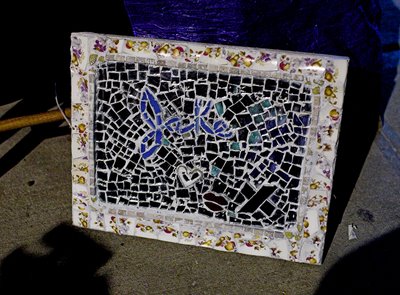 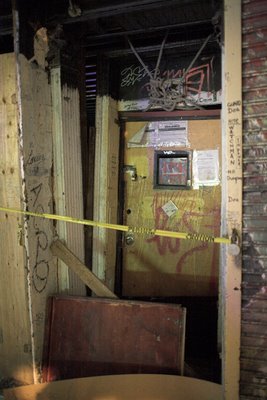 Last night while I was off following NYPD and taking pictures of bullet holes , Jim and Jesse were under attack back on St. Marks Pl. . Two men and one woman started making noise and then pushed in the door to the building in front of which Jim and Jesse were sleeping . The door crashed in all the way to the basement floor since the building is currently under construction and the ground floor has been temporarily removed .If they had stepped in it would have been one hell of a ten foot step down. But they didn't step in. Instead they turned to confront Jim since he was now awake and asking them what they were doing . They began throwing pieces of wood and whatevere else was at hand at Jim . Luckily a police car was just driving by and saw the troublemakers . The police car stopped and two officers got out at about the same time that three or four plain clothes officers from down the street walked on the scene.
The disturbance was brought to an end quickly .The three trouble makers were lucky, they were not arrested but simply told to leave the area ,which they did do . Jim and Jesse went back to bed to sleep and the next day the door was hoisted back into place and secured with rope .

This isn't the first trouble that Jim has encountered late at night since he has been living on the sidewalk at 120 St. Marks Pl. There have been other more dangerous encounters with some in the late night drinking crowds that gather at and around the bars surrounding Jim's encampment . One night young men with knives confronted and threatened Jim. A fight ensued and luckily many of the bar patrons stood up and went to the street to defend Jim .It is a dangerous ,uncertain and uneasy task to live in the street as Jim and Jesse do.

The mosaic piece that Jim was working on last night didn't get finished and thus didn't fly to England today but it does appear that it won't be long before it is finished .