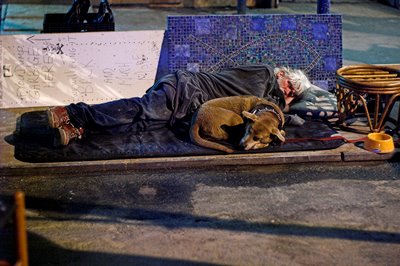 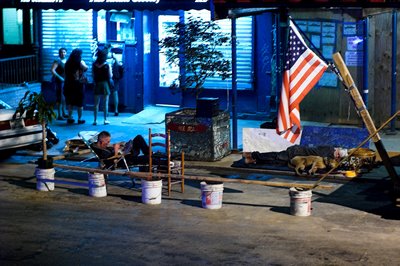 Jim is sleeping here on the sidewalk because right now he has no other place to sleep . Jim was until recently a squatter at 120 St Marks Pl . He was evicted from that building .Now he lives ,works and sleeps on the sidewalk in front of 120 St. Marks Pl.. Given that New York City is now very expensive he has few if any housing options . Right now It's mostly people with very meager incomes that are homeless but that is starting to change . Others that pay real rents ,thanks to changes in the housing laws, are becoming vulnerable to arbitrary eviction . Thus Jim's situation is becoming more and more emblematic of a situation that all of us who earn less than a quarter million a year might be forced to experience . Some of us, if evicted , will be able to move somewhere in the city but likely not anywhere near where we now live. Some ,if evicted, will have to leave NYC completely . Some of us ,if evicted ,will have no options and thus become homeless . As for you reader, what options will you have ? What law or agency will save you from the predations of a greedy and unscrupulous landlord or developer with a bank that puts too much cheap ,easy money at his disposal.