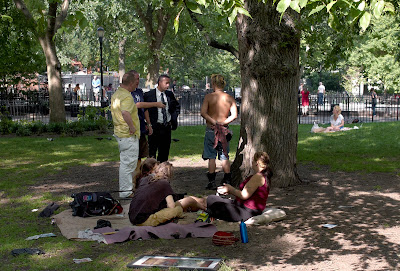 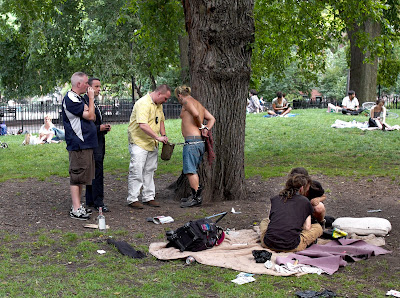 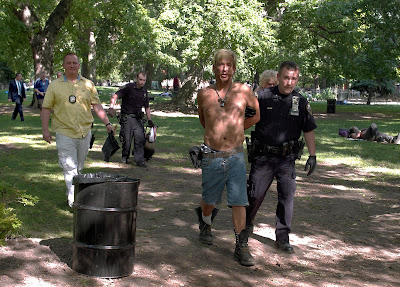 Friday afternoon an NYPD team led by Deputy Inspector Lehr , commander of the 9th precinct , on routine patrol in Tompkins Square Park arrested Johnny Bizzare .We saw a mostly empty liquor bottle and heard police mention needles and public urination.
We last pictured Johnny here at NMNL with his tongue in a mousetrap .
http://neithermorenorless.blogspot.com/2011/05/johnny-bizarres-tongue-and-other-things.html
Today it was Johnny's wrists that were restrained  in a set of regulation NYPD cuffs.
Police personnel also cautiously took possession of a hammer , the one that Johnny uses in his performances to hammer nails up his penis .
Sitting on a near-by blanket L.E.S Jewels sat canoodling with a new 19 year-old admirer.
Jewels had recently been a student of Johnny's, learning to stick nails up his penis .When we posted on Johnny last time ,Jewels had only been able to get the nails part way up his penis .  With this past claim in mind we asked Jewels if he had made any progress . According to Jewels Friday afternoon , no progress has been made , he can only get the nail part way up his penis .

Comments:
This post begs the question: "If the nail is halfway up your penis, is it half empty or half full?" I hope I'm not a dick for asking this!

This is asinine. JB is one of the most harmless people and here the cops are locking him up when women are being raped in Sara Roosevelt Park and murdered by their boyfriends in their apartments.

Goggla, you are ignorant beyond words. No one was murdered in the park or raped yesterday. HOwever, the cops did arrest a bum who was too lazy to go to the public bathroom and instead pulled his penis out in a park during the day where kids play. He is a scumb-bag. And you my dear need to get with the program.

@Anonymous 9:34 AM: Calling someone ignorant when you can't even spell "scumbag" is a little sad. And what program are you prattling on about?

You changed the subject to be about my spelling because you cannot counter-point that the cops arrest someone who exposed himself near kids on a holiday weekend. But I spell something wrong, and now Im the ignorant one. Ok Marty and Goggla, keep living in your little world.
Here is an update for you, No one got raped or killed last night in the East Village. But I did spell a word the way some clown Marty did not like. I would say send the police, but I am out of the city for the weekend. Clown

@Anonymous 10:31 PM: You didn't put a period at the end of the last one word sentence you wrote. You also forgot the apostrophe in "I'm." And thanks for the East Village crime update. That's the news, goodnight and have a pleasant tomorrow.

@Anon - I didn't see any follow-up comments until now. Sorry to have offended you, but this struck me as wrong only because JB is not a bad person and after so many violent crimes lately, I'm upset to see the police wasting their time on this guy. Yes, I agree, he should have used the restroom, but carting him off to jail for that (unless there were other offenses) seems a bit extreme.

Also, it annoys me that people hide behind the Anonymous name. I have no problem with criticism, but have the courage to show yourself.

Hiding behind anonomous name? Who cares you people take this too seriously. Grammar and Anon, I just made up a name now, And I think the Anon guy is right, If the cops start by getting the bums and junkies and perverts out of the park, then the drug dealers and rapists and other criminals stop hanging out there. As for Johnny Bizarre, he is a crazy dude< He should have got a ticket instead, the guy in the suit who arrested him is some sort of detective or something in charge.