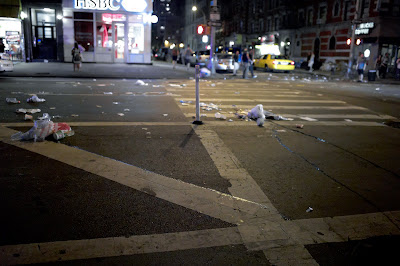 30 or so protesters trashed a stretch of 2nd avenue from 9th street to below St. Marks Place around 10PM Wednesday night . Witnesses claimed that the group mostly dressed in black , some with black bandannas , emptied trash containers and tossed newspaper dispensers into 2nd avenue while chanting anti-police rhetoric. .The group proceeded  down 2nd avenue seeming to have come from nowhere  and disappearing as mysteriously . Several police vehicles were seen on 2nd avenue and in the surrounding area prowling , looking for remnants of the group .
http://evgrieve.com/2011/07/last-night-in-east-village-solidarity.html

Really, I do appreciate the message delivered without going overharmfulboard.

Funny though, that a gang in black, can reek havoc unnoticed, but they pop folks for an open container.

As I said in the past Bob, Timing Is Everything.....

again Steve , you are correct

I don't understand how trashing 2nd Avenue is going to improve conditions in a California prison. Kind of weird.

Actually, it is a wonderful extension of the actual if you really look at it.

I for one was not aware of what is going on at Pelican Bay. Probably didn't care either.

I do however know about it now.