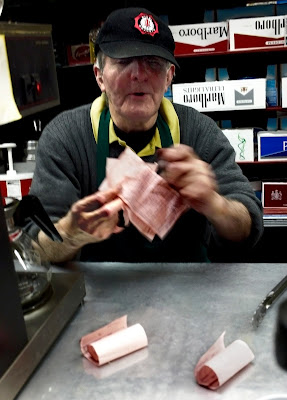 Ray made some money this week end but not enough to cover both his Con Edison bill and his rent . The first of the month is not far off which is when the rent is due but the Con Edison bill involves another turn-off notice so it probably is the bill to pay first .
Not much has been achieved lately as far as solving Ray's biggest problem which is how to survive with out Belgian fries to sell .The day is coming soon when he will not be allowed to fry fries without a complete exhaust and fire suppression system .Ray has not yet found enough new products to sell to make up for the loss of his Belgian fries business .
As if Ray doesn't have enough problems , he now has additional paper work to deal with . Ray's delivery team generates a record of business transactions for Ray in the form of pink slips . Ray has never had any such record of business to complicate his life . Now with the delivery team working Saturday nights many pink slips are produced , one for each order .What does he do with them all?
The delivery team did earn its keep though Saturday night providing Ray with more than $100 in sales from deliveries made to bars , dorms and homes .
# posted by Bob Arihood @ 3:43 AM

Comments:
I'll call the Whambulance.
Jeez, nothing's ever enough.
1 step forward and 2 steps back.
Ray is tired and really doesn't seem to have the wherewithal or desire to remain open.

Say ray does get money to cover the next month. Then what? Are we suppose to attend these fundraisers and buy from ray even though this will go on forever? I think its time to close shop.

Ray has the desire to stay open . He can't just hang it up because he would have absolutely no means of support .this is not an ideal situation with everything in just the right place . Ray wants to work as much as 3 years more , certainly until he at least has obtained his lawful social security benefits . This should happen in the next 6 months .

don't give up. i stopped in last weekend and talked with ray, he was very hopeful and said things were getting alot better for him, i'm sure he appreciates all the help. keep supporting ray's!!!

Ray continually stymies the attempts to get his social security checks. Nice guy but a subtle game player who likes all the attention. I don't blame him for that but I think people need to step back and let him sink or swim on his own. Don't want to be mean. Just trying to be realistic. If a business isn't making enough money to cover rent and utilities it is time to close up shop.

These AnonomASS people! If you dont like Ray, then shutup and dont support. But dont throw a wrench into people who want to help and care about Ray and what his store means to this neighborhood. Thats why you post Anonomously, Be a man and tell us your real name. Ray is a good man, and who has a store that is not run by some corrupt corporation or foreign family who is funneling the money back overseas... He is an American who came here years ago to make a better life for himself, and is keeping this money in the American economy, and not some foreign country we cant pronounce. He doesnt live in the Housing Projects on Ave D(like these scumbags who use a benefit card for food and drive a brand new Cadillac Escalade with Georgia plates).
If you hate Ray so much, go hang out with that douchebag who owns the Yuka bar!

Have you seen the Pepsi Refresh Project?

"We're looking for people, businesses, and non-profits with ideas that will have a positive impact. Look around your community and think about how you want to change it."

They have grants from $5K to $250K available. Multiple winners each month.

How about we get on it putting together a video, kit, etc.?

A lot of the winning projects are very small and locally focused.

How much would it cost to address the code violations?

Perhaps Ray could get this stuff FROM CRAIGSLIST?

Some other misc equipment available email me for information.

* Location: Rockland County, NY
* it's NOT ok to contact this poster with services or other commercial interests

The problem isn't Ray, the problem is the Manhattan 'heroin' economy, a pornography of trade, where any normal trade is blown away by the need to satisfy landlords and their ridiculous rents. I say heroin in the sense of a product that really doesn't have much value becomes absurdly priced, so we have to pay $10 for a fucking beer. All we are getting now are 'lounges' and 'tapas' type dining establishments geared to the Sex and the City wannabees and their lapdogs. It is not about a sustainable community. In fact that is probably the last thing city hall wants because that implies people might be organized, which is what the elites fear most of all.

@teagan - I know you are trying to be helpful but Ray can barely scrape together enough money to pay Con Ed. How is he going to get the $5k - $6k to buy a used exhaust system. This is just the beginning. He'll also need someone to install the exhaust system and then pay for a fire supression system as well. At this point I think Ray's best hope is to try and run out the clock on eviction and hopefully he'll have his SS benefits by then

I know Ray's place is clean. But a lot of people think it isn't. It might help to spruce up the outside as well as the inside. He also serves pretty unhealthy fare. I love my junk food. But a lot of people are trying to eat better especially in the E.V. Maybe he could add smoothies and a few other healthier options to his menu.

The first two anonymous comments I am sure were made by the Yuppie punk who wants to see Ray close anyway. Next weeks benefit is all over the net and is gonna bring in a lot of cash.

Yes Teagan we know that used equipment is out there at reasonable prices . We've even looked at some . Money has to be raised either through a partnership of sorts , a loan or perhaps even a gift .there are people working on all of that rightr now . Today they finally obtained a general commercial liability policy for Ray at a very reasonable price .People are working and are slowly accomplishing things one little bit at a time .

Without an exhaust and fire suppression system Ray will have to quit frying his big money maker and find new products to sell . Ray and friends are working on that too .

Ray has few options . He must keep working .He has no SS to live on if he quits working . The SS problem is of course a notable example of big government working overtime to be disfunctional and damaging .We do not know how long it will take to secure Ray's SS benefits .

Warm weather is coming and business will improve but for now with cold weather and the business slow down on avenue A it is very difficult for any businesse on avenue A to make a profit .

People often criticize Ray for what he does and how he is failing but they have to realize that he has no alternatives. Ray has been crippled by the lack of a lease and by more than $15000 in fines levied by government .They fail to appreciate that if his business is closed he may well end up living in the street . There may not be any government agency there to help him with a place to live and basic necessities . Remember State and city government are broke . There are fewer resources available today to help those in trouble .For Ray this is all very serious .Faith and works matter here .

Hey AnonymASS 11:38am + 4:30pm (no doubt the same asshead): I think it's time that YOU "close shop" and fuck off!! No one wants to read your crap in the guise of friendly advice!!

There is a lot more here than a guy trying to keep his business afloat, despite a torrent of obstacles and adversities. The BIG picture here is a community organizing to support one of its own and succeeding, no matter how many months of successive benefits and fundraisers it will require.

That alone is why Ray should stay in business -- I think what keeps him going is the love and support he receives from his community.

Now, if his landlord would simply charge a more reasonable rent, perhaps in the area of $2,000 per month vs the $4k he's saddled with now, Ray would not have to bust his ass every single night of the week, with no time to live for himself. The rest would be easy for him to deal with.

I don't think Ray's business is going to last much longer. Even if he gets everything he needs equipment-wise let's face it, he is nearly 80 years old and him running a 24/7 just isn't realistic. It was hard enough when he was younger. But he still has that working spirit left in him and it would be great if an East Village business would hire him. He has a lot to offer and would bring business in because we all love him so much. I know I would support any place that hired Ray.

Ray only wants to work long enough to be certain he has his SS benefits . At most Ray would only work 3 more years . He wants no more . He can do this successfully .He should not have to go work for someone else .

How about pickles as a new item?

Plenty of vendors in the LES.

Goes well with hot dogs or just as a snack.

What if a restaurant is closing and needs to get rid of said ventilation system fast ?

Landlord ought to forgive back rent and give Ray a 90 day moratorium on rent. let him get on his feet.

what if Ray could make the Belgian fries outside? all the other places have tables on the sidewalks.


What if some famous person gets on board? yeah, right waiting for Hollywood to bring in the cavalry again. Ray could drop dead before that happens.

you think Mr. Big Man himself Robert DeNiro cares about the little people of NYC? he only wants to vacuum up money from 9/11 & Republican mayors all for his lousy self. Big man!

and Harvey Keitel? That proud son of the Lower East Side, has escaped the stench of these mean streets a long time ago. He's tanning in the Agean Sea, that lousy so & so. I should have Harvey's problems!

People like Ray are a pretty image for him, best kept at an arm's length, like all the dirty peasants.

Good for all of you for coming to aid Ray. why the heck not?

so what if people drop money on Ray's fries and want to leave tips? the public is dropping twenty times that at the McDonald's corporation. what is McDonald's doing for the neighborhood? for any of us besides killing us with that ugly fake art and grease.

lyrics from song: "they'll never keep us down" by Hazel Dickens

Does anyone know Rosario Dawson? I could see her lending her celebrity to lend Ray and hand. She grew up in the East Village. She must have frequented Ray's.

On another note, I didn't realize Ray's rent was $3,500. That's actually reasonable in this inflated market. If he could add some more items to his menu and get rid of the creeps that scare away business, he could be making a nice profit.

Saw a discussion in NY Times Sunday 7 March 2010. Hope for the best, from Fresno, CA.