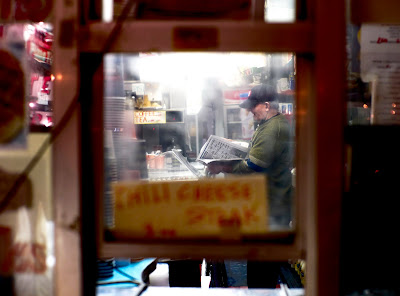 A few hours ago in an optimistic mood we posted of Ray's new Phili (sic) Cheese Steak . Now in a much less optimistic mood we regrettably have to report that according to Ray at 10PM tonight the managing agent of his building--accompanied by her bodyguard-- informed him that he has until Friday to pay the 2 months rent that he owes . The agent noted that the next time she comes to the store she will have a chain and padlocks to close the store .
Ray has been in tough situations in the past but he has always overcome all obstacles and prevailed . This time we just don't know what will happen .
# posted by Bob Arihood @ 4:10 AM

Comments:
I mentioned Ray's situation on my blog after reading this. We need to show support to Ray.

This is sad and disturbing news, Bob. Where's George Bailey when you need him? I've been patronizing Ray's as much as I can afford and I know that so many of his customers are not well-off, but what can we do? Is it possible to raise $8K in a day?

It's heart-breaking to think such a kind and generous person will go under because he's not receiving as much as he gives.

WHERE is the SLACTIVIST on this matter ... THIS would be a real MEDIA-HYPE TO SPLASH the front pages once again

this is the most depressing news i've heard in a while. i just posted on facebook. hopefully, enough people can rally enough people to step in and save ray's.

Random, but do you take requests? I've been trying to photograph the triangle-shaped lights that shine out of the back of St. Brigid's and onto the apt on 8th Street. It's super beauitful and I just don't have the skills to capture it properly.

Didn't know if that's something you'd be interested in capturing and sharing with your readers before the construction crew closes the hole in the back of the church.

(also, just realized that two of the window blackeners on the 8th Street side of the church recently fell... only had my camera phone at the time, but it's the first time I've ever seen any of the internal architecture... you should take a look!)

Re: St Brigids
I will take a look at the situation .

If you use the search engine with this blog to search St Brigids church you will find several images of the interior of the church . The interior in these pictures can been seen showing the destruction that was accomplished in a day and a half of demolition .These interior images were taken at a time when the church interior was off limits to all though at the I did tour and photograph the building with an armed body guard.

The civil court may disagree with the landlord's agent's contention that Ray can be locked out of his business if he doesn't pay his arrearages by Friday.

There is a LEGAL PROCESS that must be followed before a landlord can evict a tenant, whether residential or commercial. "Self-help" evictions are major "no-no" in the eyes of the court -- judges tend to not look very kindly on such things!!

Speaking of the landlord, regardless of the agent's dislike of Ray, coupled with her desire to score some commission money by getting a new tenant in Ray's space, it is the Lesko family that makes the final decision, not their agent, who works for THEM!!

If the agent (bodyguard be damned) tries to lock Ray out tomorrow or Saturday, I have a feeling there'll be plenty of folks ready and able to stand in her way.

Any cops who happen upon the scene (or who are reading these posts or respond to any calls they may receive) will be aware that this is a CIVIL matter that must wind its way through the courts. Without a court Order of Eviction AND a Marshall to serve an Eviction Notice AND to execute the eviction, the landlord's agent can't do SHIT!!!! Not legally, anyway....

Yeah a padlock and forced eviction needs to be done by a CITY MARSHALL. If She comes back with a bodyguard Ray should call the police. They will explain it to her!

Poor Ray. I feel so bad for the guy. All the crusties really take advantage of him, and he doesn't help himself by charging so little for everything he sells. I hate to say it but I wonder if it might be best for Ray to throw in the towel before he gets any more in debt. It would be great if an East Village business could hire him and pay him a steady salary. The guy is a workhorse.