Friday Evening and Ray's Rent Was Not Paid ... 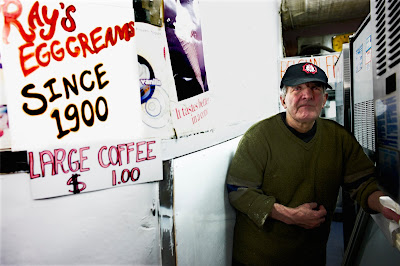 Ray was not able to meet the landlord's managing agent's ultimatum today .He did not pay the $8000 in rent that he owes to the landlord . For now though Ray's Candy Store is open for business .
Ray will certainly be open for business for a while . The building's managing agent , no matter how many body guards , can not just chain and padlock his store . Such action would be unlawful . Ray still has the right to due process and New York State's civil law establishes what that due process is . Whatever happens to Ray and his candy store will not happen overnight .
Tomorrow Ray will try to talk to the building's owner. Ray has known the owner since the owner was a boy . Ray hopes to be able to make some kind of a deal to continue operating his store until warmer times when business will pick up .Ray should be able to then make enough money to pay the back rent . These times , especially in this spate of cold weather , are difficult for not just Ray's Candy Store but also for many of the businesses on avenue A . There are currently many empty commercial spaces on avenue A .
Today many folks stopped by Ray's to buy something and to offer their support for him and his candy store . One man handed Ray $40 to help . Ray accepted the gift .
# posted by Bob Arihood @ 9:32 PM

Comments:
I've thought of Ray & his business a couple of times this week. Am hoping for a good outcome for him.

clean out the store, charge more for what he sells (it is dirt cheap and he could easily charge more and still be cheap), get rid of the piece of shit "sign" / box thingy out front, make the dogs just a bit fancier (i.e. crif dogs), sell other things besides $1 batteries, etc, etc, etc. that place is a dump and has barely been getting by for a long long time. he only has himself to blame. you cannot stand idly by while everything around you changes...keep up with the times and continually improve your offerings and you can hope to stay in business. do nothing and you doom yourself to bankruptcy.

Thanks for keeping us in the know about this dire situation. Hoping for the best.

Pay your rent!
I pay mine, why shouldn't Ray pay his?
Why is it okay to steal from the Leshko family?
What did they do to deserve this?

Can't just "padlock" a store. Not unless you're a marshall with a court order.

Ray is a sweetheart but he isn't a business man. So many of us have tried to help him over the years but he doesn't help himself. He charges prices so ridiculously so there is no way he can break even let alone make a profit. He is also incapable of holding onto the paperwork he needs to run his life and his business. Rather than crusading to save a store that he is incapable of running we should all be encouraging him to work with a social worker to get his papers in order and get him on social security. I have tried talking to him about this and I will make another effort. In the end it is up to him.

You say you pay YOUR rent? So what? Ray has been paying his rent since 1974 -- he's just having trouble now, like countless other businesses. He's not exactly a deadbeat!!

The Leshko family owns dozens of properties, including on the Lower East Side, elsewhere in NYC and outside of NYC. The son who is Ray's landlord inherited these properties from his parents, so it's not like he's being harmed by Ray's inability to cover a monthly $4,650 (store and apt.) for the past two months.

Perhaps the landlord ought to negotiate a lower and more affordable rent for Ray's small store. In this current market with dozens of empty storefronts in the area, it would make more sense to keep a viable tenant than to have NO income while waiting for another tenant to come along at some point, who may not be able to afford to keep paying, as Ray has proven he can.

To find out how you can help Ray stay afloat for long enough to win the legal battles with bureaucracy that will save his business, check out the facebook group "last ditch effort to save Ray's"

Tell everyone you know! If we all band together we can help him. There's no reason not to.

" The son who is Ray's landlord inherited these properties from his parents, so it's not like he's being harmed by Ray's inability to cover a monthly $4,650 (store and apt.) for the past two months."
If this isn't a paradoxical statement I don't know what is.
It seems like the landlord IS being harmed to the tune of exactly "$4,650."
Chris Flash is someone who likes to help himself to the property of others while I deplore thieves.

Mr. Leshko, Ray's landlord, is extremely wealthy beyond your or my wildest imagination -- he INHERITED multiple properties from his parents (he didn't pay for a damn thing himself!!) and these rental properties in and outside of NYC are all making him LOADS of money that you cannot even begin to count.

Over the course of 36 years, Ray has paid the Leshko family in the area of a MILLION DOLLARS in rent. His current inability to pay rent in this economic slump is NOT because he is a deadbeat (36 years of rent paying dispels that phony argument) and his falling behind on his rent payments temporarily is NOT stealing from the Leshko family -- your contention is bullshit!!

How much will the Leshkos make when Ray's store is VACANT for months or even years as they wait for a new (sucker) tenant to pay more or at least the same rent that Ray now pays?

Due to landlord greed, there are already TWENTY ONE empty stores on Avenue A, between Houston and East 14th Street (See EV Grieve at blogspot.com for the photos) -- if Ray is evicted, that will make 22 empty stores. Who the fuck does THAT benefit? Not only do landlords lose, but small businesses lose, as do the LES community they serve!!

[I wouldn't be surprised to find that you're one of the landlords who've contributed to the vacancies along Avenue A!!]

Chris Flash says "Mr. Leshko, Ray's landlord, is extremely wealthy beyond your or my wildest imagination -- he INHERITED multiple properties from his parents (he didn't pay for a damn thing himself!!) and these rental properties in and outside of NYC are all making him LOADS of money that you cannot even begin to count."

Okay, so in your New York you can steal from rich people?
How much money does one have to have before you put them on this "wealth redistribution list"?
You're being stupid because you won't admit you're condoning theft when that is exactly what you're doing.
Let the landlords dig a hole and bury themselves, it's their property to do with as they see fit.
You don't get to be some kind of pinko-ombudsman-robin hood wannabee.
You're being silly when you claim to know the amount of wealth I can imagine.

AnonymASS just doesn't get it, I see.

Ray's momentary lateness in paying an exorbitant rent is a pretty far cry from stealing, you dope!!

However, it could be legitimately argued that Ray's timely rent payments over the past 36 years, the last 9 of which have been at the inflated $4,000 level, is a form of theft from Ray by the Leshkos!!

I wonder what your true motivation is in posting your absurd remarks. Perhaps if you didn't hide behind your AnonymASS facade, we'd all know.