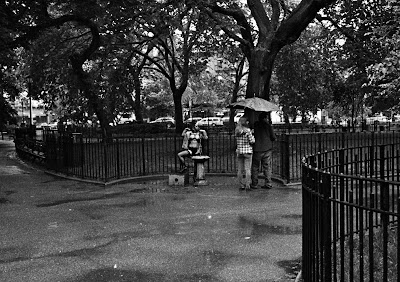 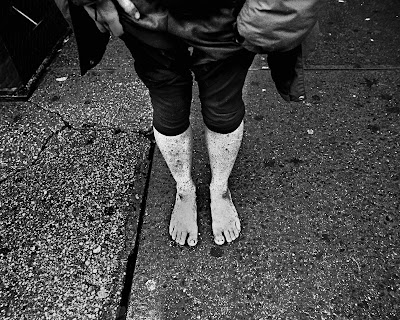 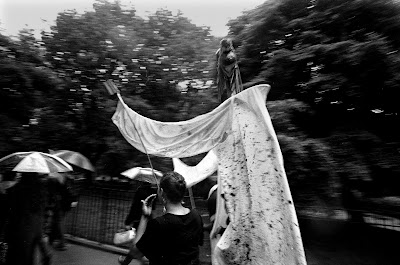 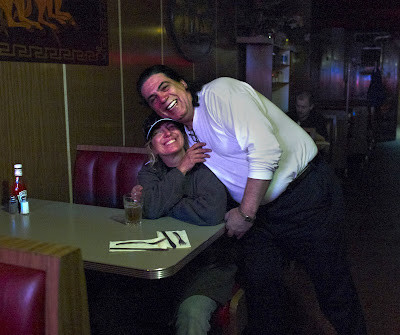 A bit more than a week ago these two were seen fighting along with pacing back-and-forth and bellowing at each other for half an hour on avenue A here on NMNL in a post titled "These Boots Weren't Made For Walkin' " . In this post from last week the Groper , sitting with cocktail above , even claimed that Dennis had hit her over the head with a ketchup bottle just like the bright red one sitting on the table above . Tonight though it was all much less frenzied at Odessa Bar .
Tonight the Groper needed a drink . She walked into the Odessa Bar and ordered a Long Island Iced Tea . As she sat in a booth sipping her cocktail her new friend Dennis , the claimed ketchup bottle wielding manager from the previous post , walked up and much to our surprise gave her a hug . Tonight Dennis and the Groper were best of friends .
# posted by Bob Arihood @ 12:33 AM 11 Comments 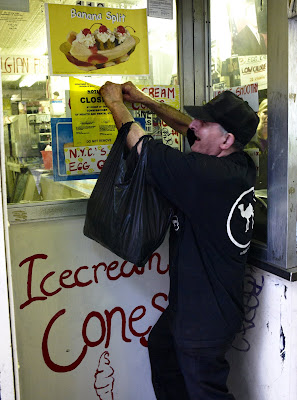 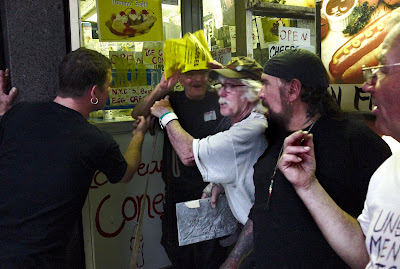 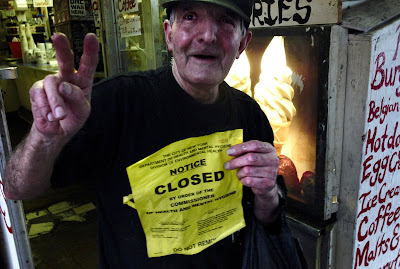 This afternoon a clamoring horde of impatient patrons rushed and mobbed Ray in order to be the first in the door as he removed a health department closure notice and reopened his world famous candy store .
Today as Ray was in court dealing with the closure of his business before an administrative judge a health inspector was inspecting his candy store . The inspector approved Rays improvements and operation in general and the judge allowed Ray to reopen his 24 hour a day , 7 day a week business.
There are still more critical inspections to come and several thousands of dollars in fines to be paid .
Finally , all should thank the several loyal friends and neighbors who freely labored all day and all night to help Ray clean and repair his candy store so that it would pass the health dept inspection this morning .
# posted by Bob Arihood @ 7:35 PM 12 Comments

Mosaic Man and Jesse Jane Have a Home Again ... For a While At Least 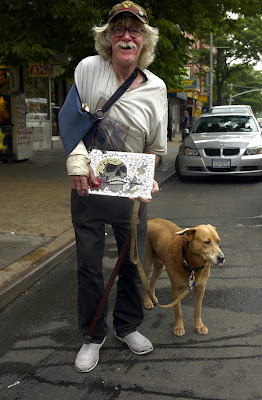 This afternoon Jim told us that he has a place to live on east 7th street for a month or so .
# posted by Bob Arihood @ 7:24 PM 4 Comments 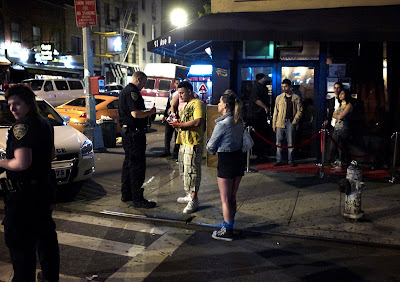 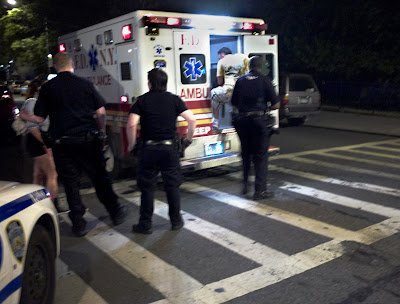 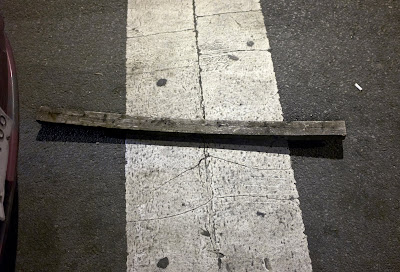 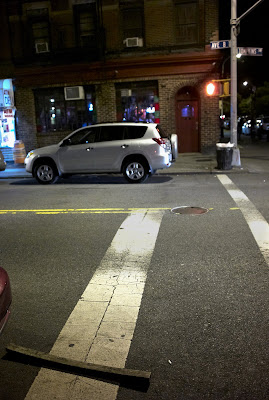 Some time around 2:15 early Sunday morning according to witnesses a man and woman were chased down avenue B along the eastern edge of Tompkins Square Park to 7th street in front of the Horse Shoe Bar where the man fell down and was beaten ,stomped and kicked by what was described as a group of 10 t0 15 young Hispanic , black and white males . When the victim attempted to stand up and fight back he was struck with a blow to his head with the short piece of weathered wood shown above . The group of young attackers then tossed the wooden bludgeon to the ground and quickly fled the scene of the attack heading east .
The male victim was injured having bruises , bloody abrasions and a deep cut approximately 1 1/4 inches long and 1/8 inch wide on the right side of his face . The victim was later taken to hospital for treatment .The victims companion appeared to not have been harmed .
The female companion of the victim noted that the group appeared from out of no where while she and her companion were walking along avenue B and then surrounded them . She also noted that the attackers seemed to have been having fun beating her companion .
The male victim noted that he had consumed a few drinks and was a little tipsy , an easy target when the odds were better than 10 to 1 against him .
One witness to the attack , some one that we have known 15 or so years , claimed that they recognized some of the attackers . This witness further claimed that the same youths had given the witness trouble at their store a few days earlier . This witness described the group of 10 t0 15 youths as mixed racially including at least one large 6 foot tall white male Hispanic that wielded the wooden club about 20 years of age and several others as Hispanic and black , ages ranging from 16 to 18 . This witness claimed to know who some of the attackers were and claimed that most came from the area around 12th street and avenue C . It was this witness that drew our attention to the piece of wood that this witness claimed to have seen used to strike the victim still lying in the street at the intersection of 7th street and avenue B .
It is not known what the motive for the attack was or whether the man and woman attacked knew their attackers . Later in the morning we learned from police that the injured male victim was not interested in pressing charges .
P.S. 1:15 AM Monday June 1 ,2009 : There is more detail on the evening in the comments.
P.S.11:30 PM Wed. June 3 , 2009 : For the story of this event as told by the victim to the Village Voice see here :
http://blogs.villagevoice.com/runninscared/archives/2009/06/beating.php
# posted by Bob Arihood @ 5:40 AM 25 Comments