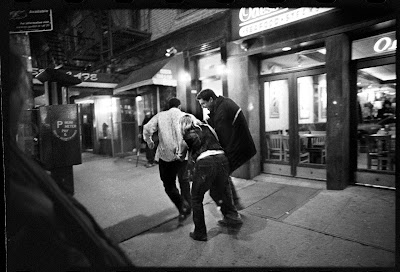 She went for whatever pleased her on avenue A Friday night . Asses or crotches to grope , her goal ; she would have them all . She preferred guys but really whatever she could get her hands on was best : one in the hand is better you know . Guys twisted , leaned , leaped and twirled ; dancing at times contortions worthy of Terpsichore herself ; performed hoping to keep their private parts safely beyond her reach .
She watched the street for just the right guys , the beautiful ones . Between gulps of Sparks Malt Liquor she spied the one she wanted and reached out to touch him . She hunched like a cougar and sprang for her prey , running after them as they ran befuddled and sometimes giggling down the street . When she did make a fruitful grope most didn't seem to mind her touch that much . Most giggled , struggled a bit , jumped away from her and hurried on down the street .
We asked the groper why she groped . She said that she liked doing it ; it made her feel really , really good . She just liked groping men's private parts . She was jonesin' for the thrill of a fruitful grope so much that she knew that it had to be an addiction . An addiction that she would never be able to kick .
Finally the police came and she and all the others drinking with her on the block disappeared into the night . .
# posted by Bob Arihood @ 10:44 PM 8 Comments 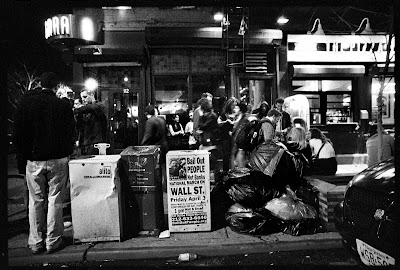 On Avenue A Thursday Night 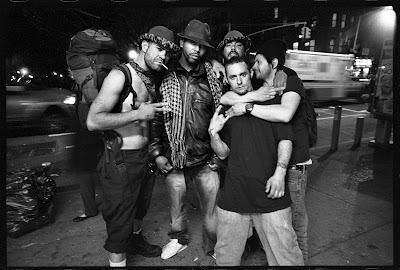 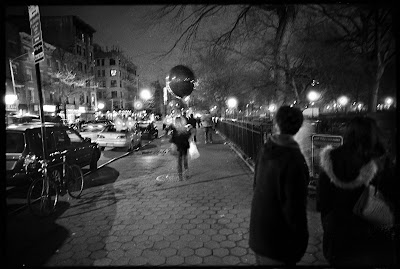 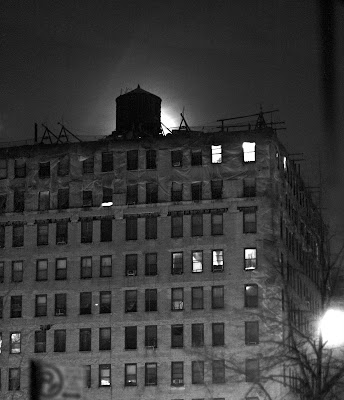 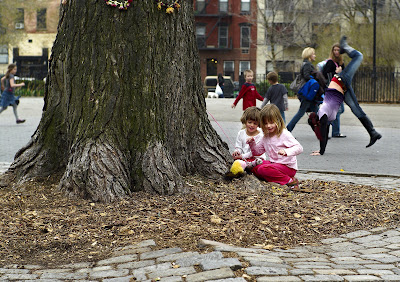 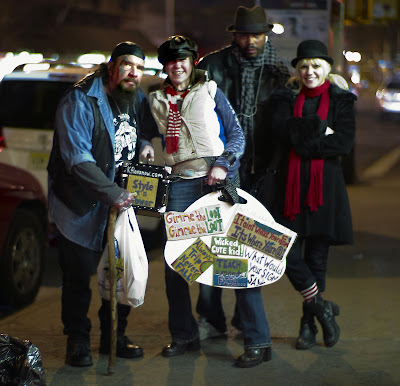 As we have noted in a previous post titled "Pissing Again and Pissing Off a Few" , Biker Bill , a regular contributor here at NMNL , was injured in a confrontation with a menacing and taunting L.E.S. Jewels on the sidewalk out front of Ray's Candy Store . Today he is a resident of the Village Nursing Home at 607 Hudson Street , at 12th street . Biker Bill ,a.k.a. Bill Walker , has a fractured pelvis and will likely be a resident at the care facility for 6 to 8 weeks . He is in rm 636 . The number of the home is 212 255 3005 . Bills journey to a room and care at the Village Nursing Home was a long and miserable journey .

What follows , as it pertains at least to the events that only Biker Bill could know , is an account of Bill's painful tribulations as told to us by Biker Bill Walker himself .

After being transported from the scene of his injury to St Vincent's Hospital , Bill's friends lost contact with him . He was essentially a missing person for 7 days . His friends were worried because they knew that he had been injured . His Friends knew that he had a room at a welfare Hotel on west 40th street in Manhattan ; they had taken him there many times at the end of an evening at Ray's Candy Store . The operator of the hotel was contacted by several of Bill's friends but the hotel's staff would neither confirm nor deny any knowledge of Biker Bill , claiming that such a privacy policy was necessary to protect the privacy of the hotel's residents .

A rumor was afoot that Bill had returned to hospital and was no longer at the hotel . No one had any way of knowing whether this was rumor or fact .These multiple possibilities complicated the situation as it also made many of Bill's friends much more concerned about Bill's welfare . All of the major city hospitals were called looking for Bill . They all claimed to not have admitted Bill Walker .

Seven days after we had last seen Bill or had heard any word of his location or condition we were going to Midtown South Precinct to file a report for a missing Biker Bill . Wednesday afternoon just before we were preparing to go to the Midtown South Precinct to file a missing person report we found a phone message from Bill telling us that he was in Beth Israel hospital with a broken hip .

Bill had last been seen 7 days earlier on a Wednesday night , the day after after St. Patrick's day , on avenue A crying out in pain as he was being put in an ambulance that was to take him to St Vincent's hospital . Bill had fallen during an encounter with an obnoxious and drunken menacing L.E.S. Jewels . Jewels as is common for him on avenue A was in the midst of an evening of drunken malicious shenanigans . Jewels had been in Bill's face , menacing , taunting and insulting him as he had also done with many others on this evening . A cab driver that Jewels had menaced in the street just previous to Bill's injury had even beaten Jewels with a large stick .The story of this evening's violence was the subject of the recent NMNL post mentioned above .

According to Bill when he arrived at his hotel , hotel staff at the front door told Bill , now in a wheelchair , that they would not allow him to return to his room in his condition . Bill claims that with the assistance of some helpful non-staff fellows who carried him up 3 flights of stairs with him sitting in his wheelchair he finally returned to his room . Bill was now home , in pain and unable to walk or even stand .

According to Bill the next day he fell to the floor from his bed . He claims that he remained on the floor for 2 days and that after having defecated and urinated in his clothes several times still remained unnoticed and unattended to by hotel staff .

Bill claims that food was brought to his room by fellow hotel occupants but no one bothered to help him up from the floor .
Bill claims that finally Sunday afternoon after much pounding on the floor and walls with Bill's walking stick and much yelling too , staff came to his room . An ambulance was finally called for and Bill was removed to Beth Israel Hospital where according to Bill he waited on a gurney in the emergency room for 12 hours until he was attended to .

Several x-rays were taken . Finally a fracture was spotted in his pelvis and the reason for Bill's inability to walk and several days of considerable pain was revealed . 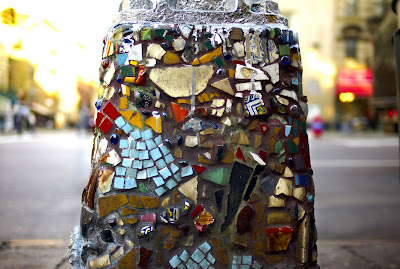 Jim Power , "Mosic Man " , who was the first subject of a post here at NMNL nearly 3 years ago , is today a resident of the VA Hospital . Jim has 2 broken bones in his shoulder and one or more in his hand and/or wrist . Jim's phone message says that he fell in his bathroom .
Jim's dog Jesse Jane is currently being cared for by freinds . She can be seen some mornings at the Tompkins Square Park dog run having a good time with all the other dogs though she does seriously miss Jim .
Jim of course , as most probably already know , is responsible for the lamp post mosaics , as above , and numerous other public mosaic works around town .
# posted by Bob Arihood @ 8:05 PM 1 Comments 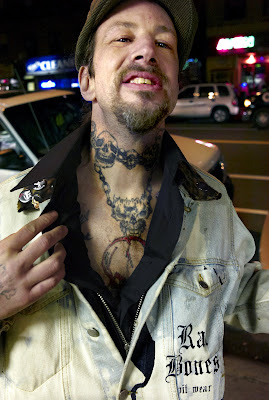 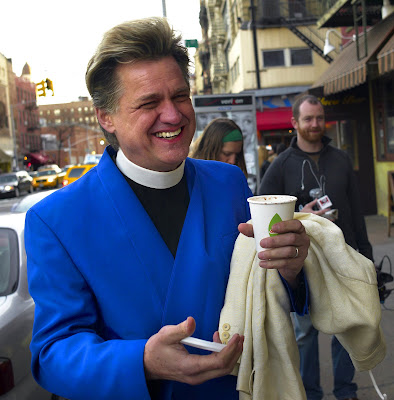 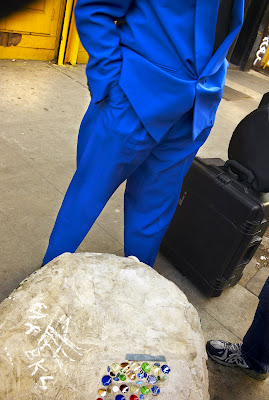 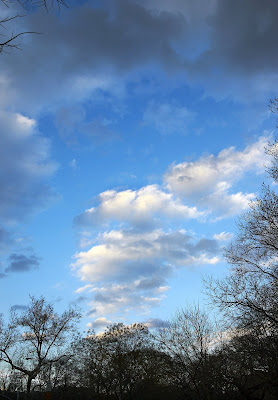 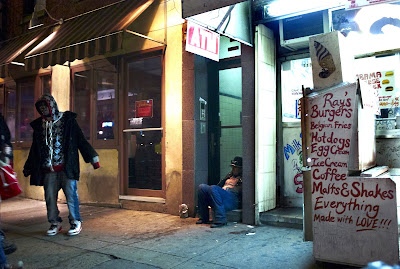 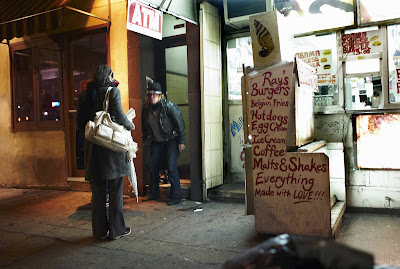 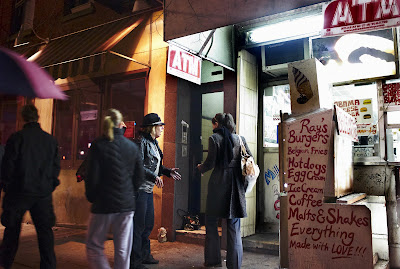 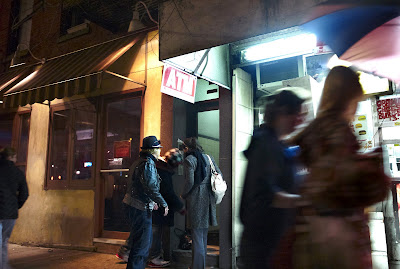 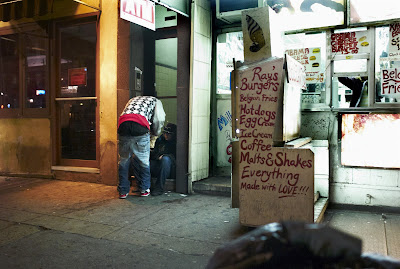 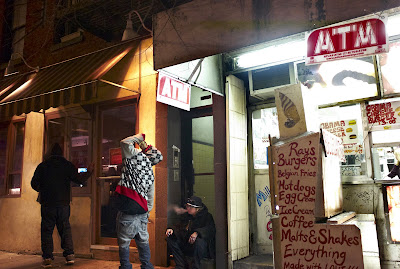 In fairy tales bridges have nasty old trolls beneath them . On avenue A , door ways have irritable persons sitting and drinking in them .

Sunday Night at 7th Street and Avenue A 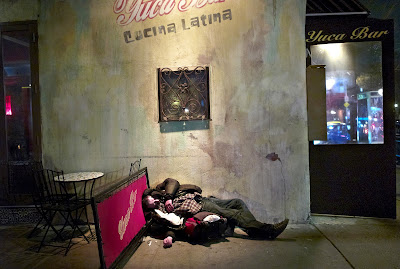 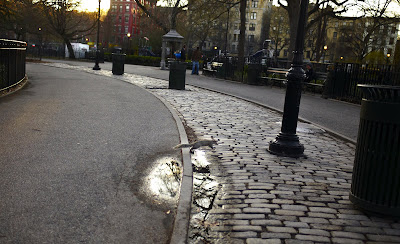