Two Males Arrested by Large NYPD Contingent on Avenue A ... 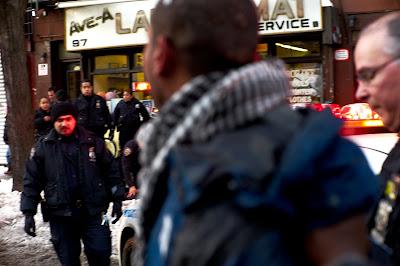 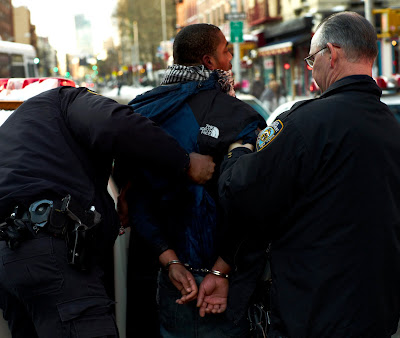 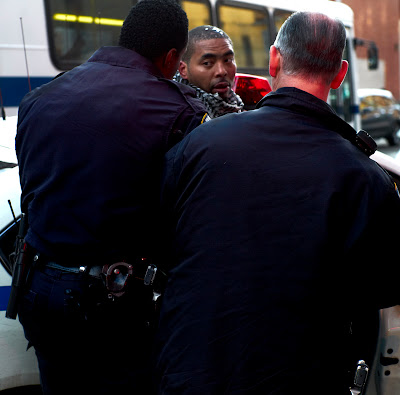 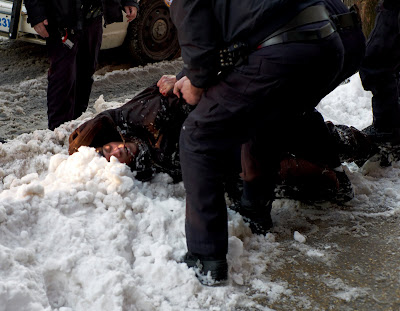 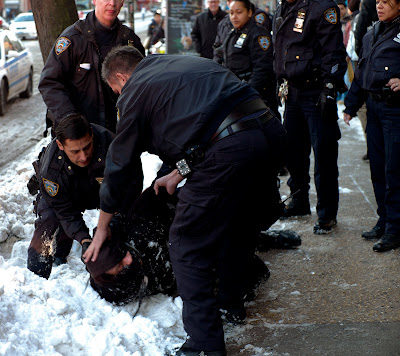 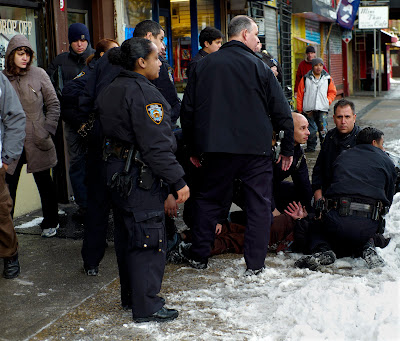 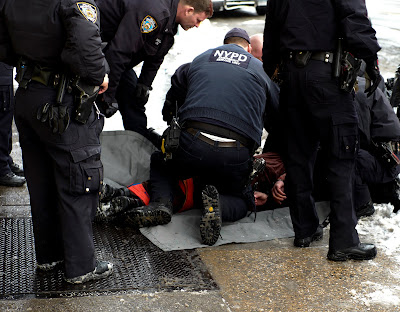 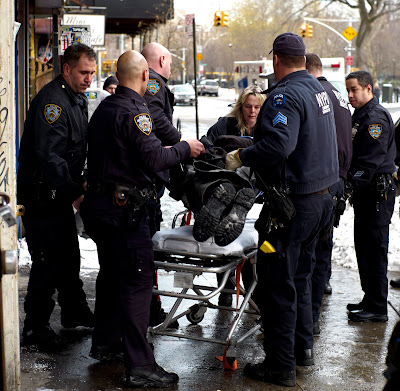 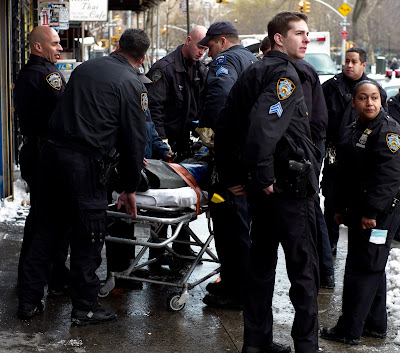 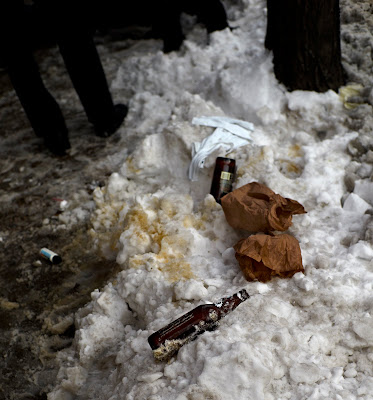 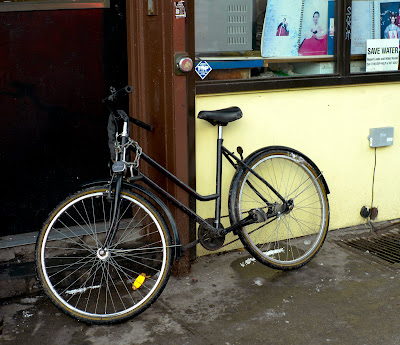 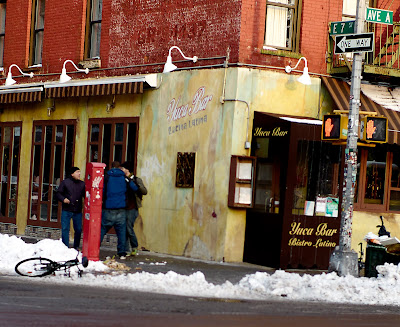 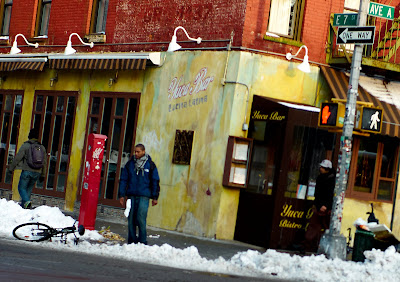 Around 8 AM Monday morning 2 males were arrested in front of a laundromat on the block on avenue A between 6th and 7th streets. The arrest involved a number of police officers who had raced to the scene with both flashing lights and sirens .
One of the 2 arrested males is known here on this blog as "Choice"(a.k.a. Chris). "Choice" was just a few days ago seen here confronting bar patrons and cops on avenue A outside Odessa bar .
Though both males resisted arrest the unidentified male was very uncooperative and special measures were taken to subdue and remove him from the scene of the arrest to a hospital . Police restrained the male's legs with straps and then wrapped him up like a taco in a large restraining jacket . The male was then strapped to a gurney and hauled off to an ambulance .
Few at the scene , including cops , had much to say about why the 2 males were arrested . We noticed an apparently abandoned bicycle though at the scene that one witness , who knows "Choice" well , alleged had been stolen by "Choice" up avenue A a short time earlier .It did appear to be the bicycle that we had seen "choice" walking with earlier .
Twenty minutes earlier we had by chance noticed "Choice " in a confrontation with a male in a dark jacket and a seaman's cap . The male in the dark jacket was yelling at "Choice" , calling him an asshole for riding a bicycle on the sidewalk . Apparently "Choice" had struck the angry man in the dark jacket while riding the bicycle on the sidewalk . A male with a backpack stepped in to prevent a fight . We did see "Choice" at this time pick up the bicycle and walk off to the south across 7th street .We do not believe though that the alleged theft of a bicycle was the reason for the arrests since the bicycle (stolen or not ) remained at the scene after the police had left the area.

P.S. December 25 : According to Ray Alvarez , "Choice" (a.k.a. Chris Keppel) is back on the street a free man . Ray related to us that "Choice" came into his candy store the evening of the day after his arrest .

Comments:
Which one to post.....
Choice fought the law, and the law won
or
Eff with the bulls, get the horns
or maybe
couldn't they grab Jules while they were at it?

But Holy Mother Of God!

More than just boring,. the weather should be a factor in the Avw A scene being less than attractive.

Once again, I have a special place in my heart for hoice, who I know most hat, and with good reason.

But he was there for me when I needed him.

So, let's pray that he moves on.

There is more to his story than most of you know.

He's not really a racist, or a bad guy.

On Christmas Eve at 2pm two years ago my rear wheel was stolen right off my locked bike in SoHo. Somehow if this guy was stealing a bike I haven't got great sympathy for him.

wow-that's a lot of coppers!

Though the bicycle was perhaps stolen--some who know "Choice " quite well were claiming that it was stolen--the arrest was likely for some confrontation between the police and the two who were arrested .Something like a bad attitude problem , an open container or some disorderly behavior that got out of control is likely what caused a cop to call for help bringing all the reinforcements with flashing lights and sirens .It appeared that most of the 9th precinct that was available showed up .This is the typical response to a call for an officer in trouble .There were 15 or so police officers at the scene.

The bicycle would have been taken by the police as evidence if it had been stolen. The bicycle remained leaning against the building unsecured for some unknown amount of time after the police had left the area.

That's because the Keystone Cops were more on the scene to squelch an unruly duo, then to solve a crime.

I have all the respect in the world for the NYPD, but this is a common reference to the status Quo, as things go.....

does it really take that many pigs to arrest two people for drinking? maybe the 'unidentified male' was fighting so much because having ten to fifteen cops from the 'fighting 9th' rush you all at once is a little more than intimidating. i've watched a friend of mine get his wrist broken by just one of them, i'd be fighting for my life too. this sucks tho. i was hangin with choice the night before. hopefully there will be some update on the status of what comes of this, if anything.

another boring black or spanish drunk.

who will die young

Last time I checked, if you try and fight the NYPD, they call for backup. And Im happy they arrested Choice. Choice is a BULLY. And he got what he deserves. He needs to stay in jail. He does nothing good for society but break laws(yes drinking on ave A is a breaking a law). Harassing me when I walk my dog in the park is breaking a law.
Good riddance to bad rubbish. Choice is a drain on society, my tax dollars that pay when to feed him when he gets arrested or goes to hospital, and doesnt doeserve to breathe the air in nyc. Rot in jail ya punk ass racist .
PS BOB you rock, dont stop bloggin

Although I've stuck up for him in the past. I must say that you are correct.

No one deserves to get picked on while walking their dog in the park.

He has issues, but taking them out on the innocent is wrong.

bullet to the head

"Police restrained the male's legs with straps and then wrapped him up like a taco...."

Seems like this guy would be a good "choice" for some of the Avenue A street justice that's been handed down to others for similarly unspecific "crimes."

i am not a fan of choice. too unpredictable. has brought a very dark energy to ave a on and off the past couple of years. dude can rap tho. he should clean up and work on that. ive seen him happy up in the cypher vibing. but ive also experienced him very angry for no reason at all. way too angry.