Spidey Gets His Rickshaw Back ... 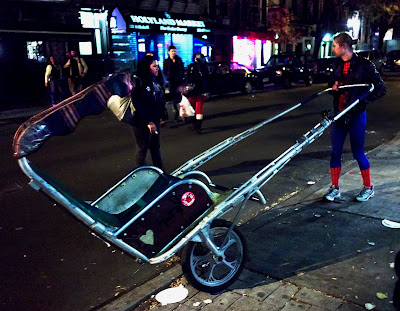 Spidey has his rickshaw in hand again . He had stepped into Lucy's on avenue a for a brief few minutes . He left his rickshaw unattended and unsecured . Thieves saw their opportunity and took Spidey's rickshaw for a run .
Spidey rode around the neighborhood in a cab for a while looking for his rickshaw . Then later while riding the hood on a borrowed bicycle he received a phone call from someone that had spotted the rickshaw . The rickshaw had been abandoned by the thieves and left sitting 2 blocks from Lucy's at 11th street and avenue A .
# posted by Bob Arihood @ 6:06 AM

Comments:
Is nothing sacred???

Not even Spiderman is immune from the toxicity of the LES.

Oh what a tangled web we weave
When first we practice to deceive....

I was at Lucy's when it happened..glad he got it back..Where the heck would one get another rickshaw? heehee

Wasn't this an episode of Seinfeld?
Can Jules account for his where abouts during the incident?