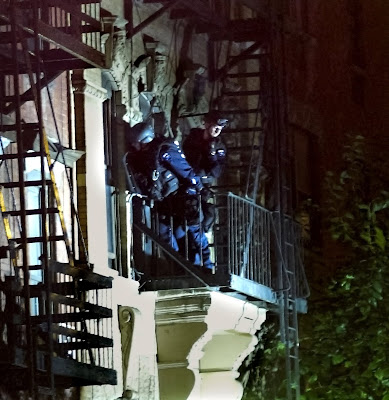 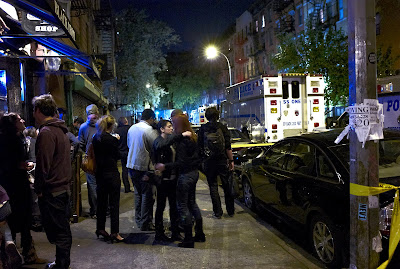 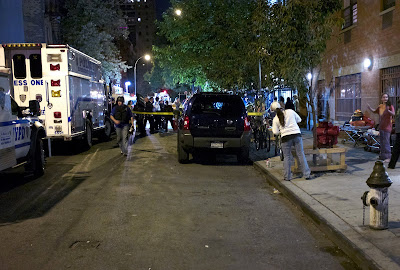 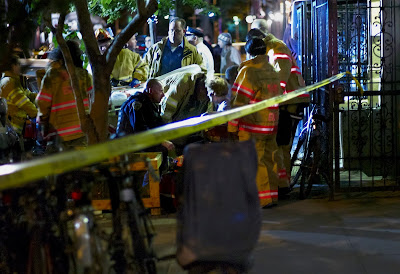 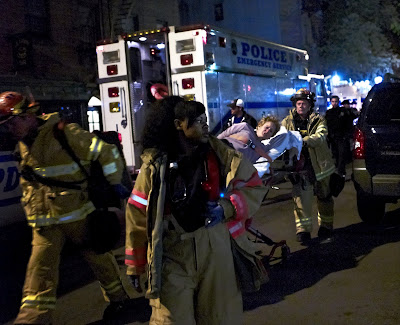 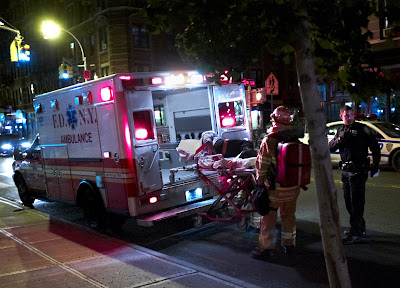 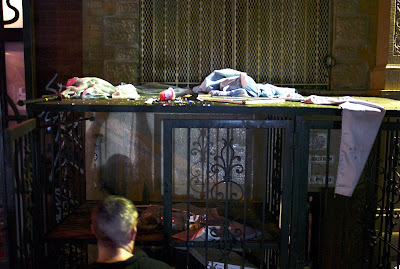 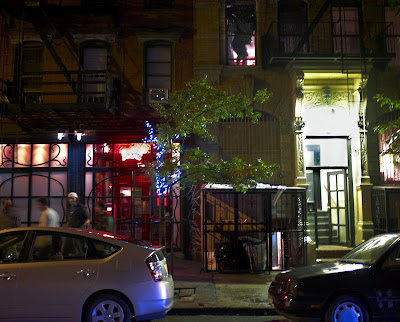 Comments:
Wow. That's some scene. Was the riot gear and tear gas necessary?

I always find it interesting how NYPD react or don't react to something. For 10-15 years, there was a mentally unstable tenant in my apt building who caused harm to herself and others on a regular basis. Police were summoned all the time and they rarely showed up within an hour (even though we are half a block from the precinct). This tenant was well-known to them and they may not have taken the calls seriously, but this person did hurt others (including myself) and when is it that the cops start picking and choosing their emergencies? Why no such response to the TSP beatings?

Yes, i've heard about this woman before. I guess it's the noise that bothers her probably..she has been known to throw eggs down at the people from ACE bar..patrons and just the workers and bouncers that are just standing out there.

They need to relocate her to one of the apartments above Ray's or Odessa on Ave A.

Hello-
I stumbled onto this blog just yesterday when I did a search for an old friend of mine, Markey Bena.
Needless to say I am shocked and very concerned. Does anyone have information about how he is doing now? I would appreciate any updates: td_65@yahoo.com
Thank you- T

Have not seen Markey lately . Last seen a month or so ago he seemed to be doing much better .

Grieve I do not know what was necessary here . This was a very large operation . Probably safer for all including especially those at the critical locations up front when done this way using overwhelming muscle .

In November 1985 I was standing outside a makeshift club on Rivington Street at around 11pm. There was a lot of noise from this club on what was then a very quiet street. Someone threw a couple beer bottles out their window, smashing around our feet. The message was clear - get the fuck off my block and shut the hell up. We got out of there quickly to leave the residents in peace.

Great photo of her getting sent away on the stretcher. She's a wild one.
She's probably drinking too much tap water.

I was trapped in that bar while all this went down and someone actually did get hit with something in the head which is why the cops were called in the first place. Thank God it was not the mallet or hammer she threw!

reminds me of those cartoons where a whole fire dept is dispersed to rescue the kitten from the tree. complete mis-allocation of resources.

Seems to me that this woman simply reacted to a bunch of noisy cigarette-smoking oblivious bar patrons gathering noisily outside her window, with their toxic fumes choking her in her home.

She's not the only person who's been responding in kind to those who don't give a shit about the communities in which they party with no regard to those they are disturbing.

Many fed-up residents have been pouring things on and slinging piss and shit at these assholes, and they've had it coming to them.

If this lady was a tad smarter, she'd've tossed her stuff at them from the roof, then hidden when the cops came, repeating her counter-assault after the cops left.

who the hell wants noisy Yunnies under their window when they are trying to sleep at night?

Her only crime is that she didn't shut the dam bar down. for good

Loisada is ruined by all these bars and cafes.

@ Chris Flash,
If you want quiet, move to the Upper East Side you big baby. Get some earplugs.
The no smoking indoor policy is what triggers this noise issue anyway. Thank your mayor.

Hey Anonymous 523: How about if I want quiet, I and my neighbors let the monied transients and interlopers from other boroughs disturbing the peace know how we feel and get them to quiet down or make them get the fuck out of Dodge? I'm not going anywhere, you ass head!!

If you are one of those arrogant drunken noisemakers, you too will feel the wrath of the neighborhood you are disrupting....

@ Chris Flash,
If you want quiet, move to the Upper East Side you big baby. Get some earplugs.
The no smoking indoor policy is what triggers this noise issue anyway. Thank your mayor.

Thank you for your quick response. If at all possible, I would appreciate knowing if you get other updates about Markey.

Also, I have to say your blog is quite impressive, it captures different aspects of life in the neighborhood and seems to be a forum for people to express their (various!) opinions about what is going on.

Chris, the woman is schizophrenic and has attacked many of her neighbors. She also has a deep prejudice against hispanics. She smashes up her own apartment with her mallet and has attempted to saw through gas risers, but thankfully tonight she is resting comfortably in Belleveiw. This episode has little to do with the patrons of ACE bar.

I wasn't aware of her history. From what you say, it's good she's out of there....

I was refering to rising anger by neighbors who are tired of irresponsible patrons of bars and clubs, leading to some folks dropping stuff on them. In one such recent case, noisy late night customers seated at an outdoor café in the rear yard of an apt. building who were keeping residents on all sides awake had liquid dumped on their table from above, ending their midnight soiree.

This is the only thing these people understand, as politely asking them to stop smoking in front of your window and/or asking them to keep the noise and music down over and over every night is untenable and is usually met with pejoratives.

Given enough of this shit, I can see how neighbors can reach their breaking point....

WHERE is the " SLACKTIVIST" WHERE IS DAVID PEEL and the PIEMAN ??? DON'T THEY CARE ANYMORE ABOUT THE LES

I do not know Melanie .

There were only 3 people in front of the bar when she threw the object at the guy. So while your angry at people being noisy outside of bars, it's not relevant. She's mental insane & dangerous.
The mayor made smoking illegal inside, for the benefit of the people working inside these places, but it's created a secondary problem, which is why you have to deal with noise and smoke. Do I like it any better? not really.