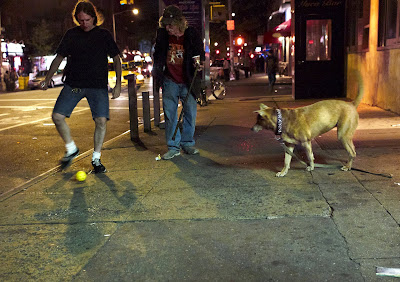 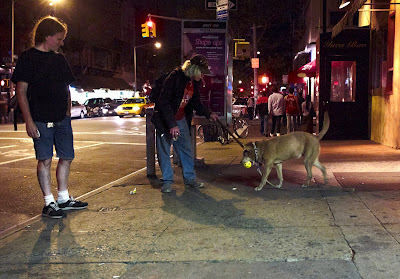 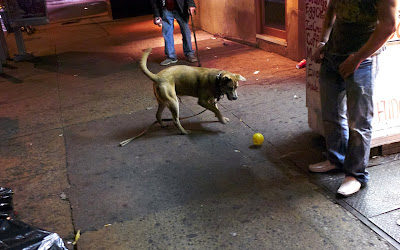 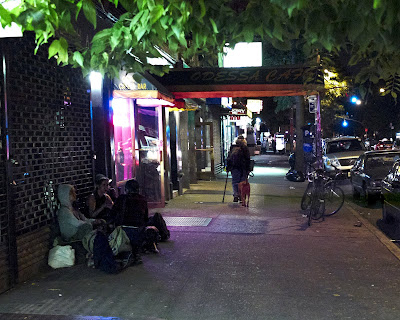 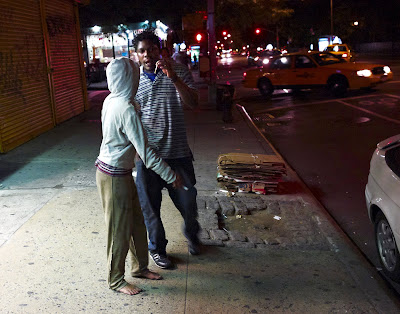 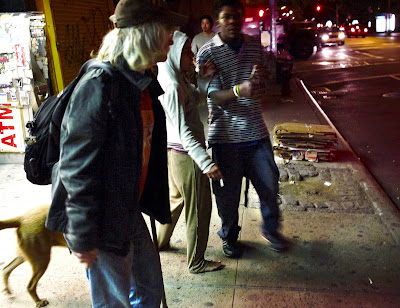 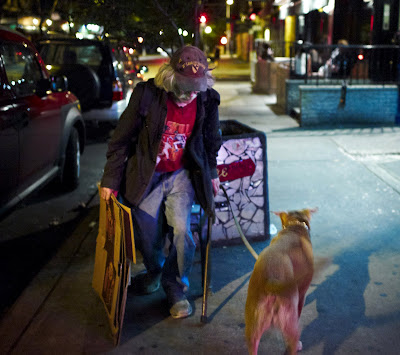 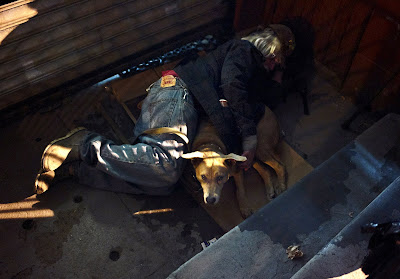 Jesse Jane had some fun tonight : a slobbery ball game with friends at Ray's. She later received some strokes of congratulations when Jim showed some visitors to Ray's her picture in "The Villager ".
Later while on their way to a place to sleep Jim was attacked by one Jose Palacios , here previously known as the "Drink Thief". Palacios approached Jim to get some money . Jim having little of nothing refused him . Palacios noticeably drunk then went for weak and infirm Jim , grabbing him .
Those who had been playing ball with Jesse Jane earlier were quickly right there in Palacios' face ready to pound him into the sidewalk .But it was petite and gentle Bailey who really saved the day when she stepped in between Jim , his defenders and Palacios . Bailey very effectively calmed things down . Police were called and the drunken Palacios , taking Bailey's advice , finally walked off into the night .
Jim continued on his way to find a place to sleep . He was very tired and also in some pain . He found some bedding , card board boxes , leaning against one of the planters that he had made 3 years ago on St Marks Place . He then sat down for a while .
Along with Biker Bill we scouted the block where he was sleeping this night looking for trouble makers . Once it was clear that there was no one around to cause Jim problems we said good night .
Part II : Shots fired on 6th Street
In another earlier unrelated event some juvenile gun play sent folks scrambling for cover .
According to witnesses several shots were fired shortly after sundown at 724 E. 6th street ,on the block between avenues C and D.
According to a witness the sidewalk had been filled with adults and children . A fight broke out among several young males . Then shots were fired and everyone went for cover .The shooter fled the scene . No one was injured . Cops shortly arrived at the scene and did give chase to the extent that they could . According to a witness' description the shooter that fled the scene was a 13 year old male wearing a black T-shirt .
As far as we know no one was arrested . Sorry , for technical reasons no pictures of this event .

Comments:
It is very sad in this country of ours that everyone does not have proper shelter-food-money-and a good life. Is this the cosmic joke?It is cruel and unfunny.
Great catch as always. The eyes of Jesse Jane in the last photo made me cry.

Jose is still around? I'm surprised..

Yes the Drink Thief is back ..and dangerously so .

What's even more sad is that the degenerate youth that plagues our society get to sleep in a warm bed every night in order to wake up the next day and play with their guns again. Meanwhile those that really need the help (ie. Mosaic Man) have to sleep on the streets.