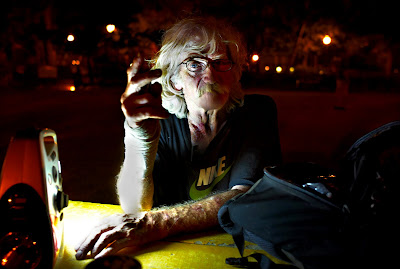 Early Saturday morning 3 drunks singing "...rain drops keep fallin' on my head ..." turned the corner of 9th street and avenue A . Jim had just risen from his rude bed on the 9th street side walk next to Doc Holiday's to move his possessions a little closer to the building under the scaffolding since it had started to rain .
The group approached Jim walking uninvited under the the scaffolding to get out of the rain . One of the drunken males started pissing in the door way next to Jim's bed ; Jim protested . The drunk then shoved Jim , wrestled with him and according to Jim started to reach for his wallet in his hip pocket . Jim claims that the other male also joined the fray but was not so much of a problem . According to Jim the drunken woman just stood and watched . Jesse Jane barked and growled a bit too.
As Jim fought back standing his ground at his little resting place under some scaffolding , the 3 middle aged drunks gave up the contest and left heading down avenue A to ray's candy store . Jim followed them at a distance .Jim wasn't hurt too badly just some bruises and scrapes .
Jim told us this most recent episode in the continuing saga of his existence on the street while sitting at a table in the Tompkins Square Park dog run with his dog Jesse Jane . The place wreaked of dog urine . Dogs barked and chased each other while a gang of teen aged youths ran wildly and jumped fences mostly claiming for themselves the east end of TSP.
Jim also told us about being robbed earlier in the week by some young well dressed males . Jim was working on a mosaic at curbside . The half dozen or so young males , according to Jim around 16 or so, taunted him and then took his donations that were in a small container sitting next to him. These donations amounted to $35 , a large sum for Jim to loose .
Sitting surrounded by the dark of night at a picnic table we talked with Jim illuminated by the flux of his very bright utility light . Jesse Jane slept . Jim's train of thought wandered from subject to subject finally settling on a night 40 years ago in Vietnam .
On this night 40 years ago he spent his last night in the field down south near My Tho , a small town in the Mekong delta . The next day his Army Signal Corp unit would return to Long Bihn . This last night he was on garbage detail and there was work to be done collecting garbage from garbage containers . He and a buddy intended to have a good time too while collecting garbage . After all they were in the Army , right ? Jim bought some local Vietnamese cigarettes
According to Jim "Park Lane" cigarettes when smoked relax one more than one would expect a cigarette to do .... and then the world starts dissolving . Everything solid drips . According to Jim , opium , tobacco and killer Thai weed made Park Lanes something other than "just another cigarette"
The 2 soldiers were driving a 3/4 ton truck heading down a dark unlighted local road picking up garbage along the way . They were on their own out there on the road and did pretty much as they pleased ...in between emptying garbage containers that is . Later in the evening the road ahead in the light of the trucks headlights turned to green . They had reached the end of this particular road . There was no more road ahead , just the verdant wilds of the Mekong Delta . They decided to light up .
For a while they felt very much at ease . They decided to climb to the top of a nearby abandoned shed . They wanted to be up high , really high . They worked their way to the top of the steel corrugated roof and the world started to dissolve . Ah , that Thai weed .
As the known solid world dripped away machine gun fire began . Sizzling tracer rounds whizzed by right over head . Fireworks now too . Jim said that it clearly was a 50 caliber weapon . He claimed that those firing the weapon weren't necessarily the enemy but were likely private security personnel protecting a local Vietnamese plantation .
Both Jim and his buddy tried to get down as low as they could as soon as they could . They slid down the corrugated roof with the sharp edges of the steel slitting and scraping their bellies , arms and legs . Jim went over the edge of the roof bleeding but hung on to the edge of the roof not dropping to the ground . He did not know how far up or how far down he was . He did not know how far the drop to the ground was . Eventually he tired and had to let go of the roof dropping a whole foot to the ground .
Not much has changed for Jim . His future is still very unpredictable . Sometimes a hint of the future is quite threatening . Its still from one moment to the next that he lives . But then Jim often claims that he never really came back from Vietnam .
# posted by Bob Arihood @ 6:01 PM

Comments:
Thank you for the story. I used to see him all over the EV when I lived there. Knew he made mosaics, but didn't know he was homeless and never knew his name or his story. Thanks for filling in some missing pieces.

This is really disgusting. How people can hurt those who are "less fortunate" (depending on your view) is beyond me. They'll get theirs. One day. In the mean time, Godspeed Mosaic Man.

And thanks, Bob, for the reporting.

Heartbreaking story. Could have done with acouple of photos of his work!

Just use the search engine to search for Mosaic Man or Jim powers . The first portion of this blog 3 years ago shows a great many of his works . This first portion was as the recent posts about Jim and Jesse Jane's lives in the street .