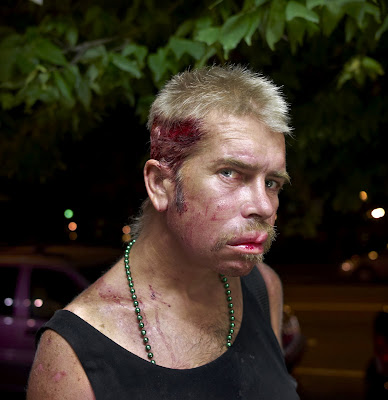 The picture above was taken at Ray's Candy Store at 11:15 PM Monday night . Markey was attacked and beaten an hour earlier on 7th street between avenues C and D . This is the 3rd post that we have made since the middle of May 2009 depicting a battered Markey .
Tonight 3 young males , Markey claims 15 to 17 years of age , attacked Markey while he was sitting quietly on the sidewalk drinking a beer . The young males seemed to know Markey . They commented "... oh you got a hair cut man ..." . Markey's hair was shaved at the beginning of July to make way for stitches after his most recent beating that occured on 9th street . These 3 may have been some of the same young males that beat Markey on May 8th of this year . This previous beating occured at 7th street and avenue B in front of Vasac's Horse Shoe Bar .
Markey as can be seen has some cuts , scrapes and bruises . He reported the attack to the 9th precinct . He had not received medical attention yet when we photographed him .
# posted by Bob Arihood @ 3:10 AM

Comments:
Not for nothing, get the hint and stop hanging aroudn the EVil. Its not freindly to the homeless anymore with the cops or the Puerto ricans from campos plaza.

I'll have to agree with anonymous who claims a lack of friendliness. It's a sad comment when most of us who travel the streets of the east village need to be aware of potential violence.
It seems plausible, that those who were in the game of violating street people who were vulnerable, would know markey as easy prey. one blow, as the drs suggest, could have done markey in. it was hot markey was not 100% and he was good fun if you knocked him down....
yet here is an interesting insight.
and it was suggested to me by a dear friend of markey.
markey had time to make a choice,after whatever happened happened.
to stay or to go.
markey was a deeply spiritual person. I believe he saw the glory and went forward.
Also, in returning to the memorial site, i've learned how sad those who loved him are. seemingly lost without the comfort of markey's presence on the street ~
markey with a witty remark,
a poignant insight,
a smart ass retort. ahhhhh markey.
markey is truly missed. truly deeply forever missed.

I loved Markey like none other. We had the
most amazing love affair that lasted five and a half years and ended when he chose the streets to jail. Not a day passed that I didn't think of him. I learned of his death on Feb 24th 2011. How could I have not known? We were cut from the same cloth so how is it I wasn't aware of his suffering?! I blame myself, I could have provided comfort. I wish Parker or Samantha would have contacted me but I understand. I just can't stand the pain. We will never meet, again. Haunt me, baby, like Catherine haunted Heathcliff! Ruth