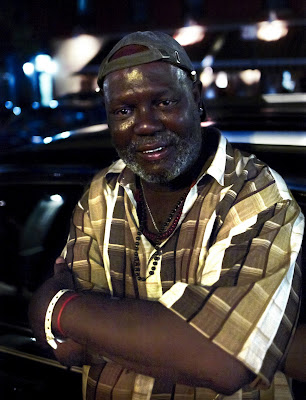 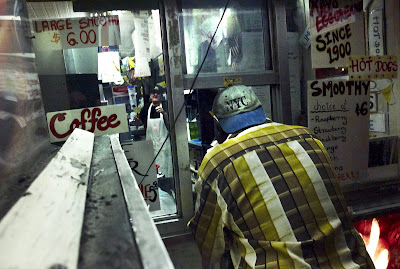 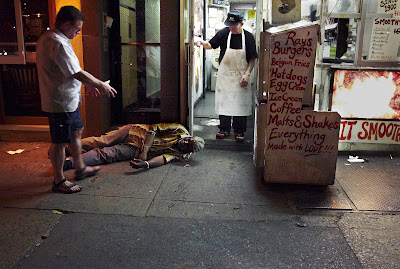 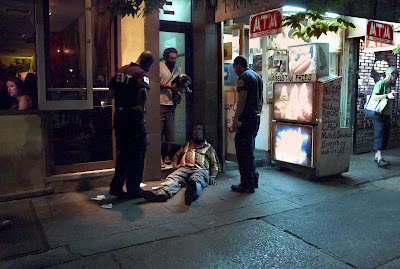 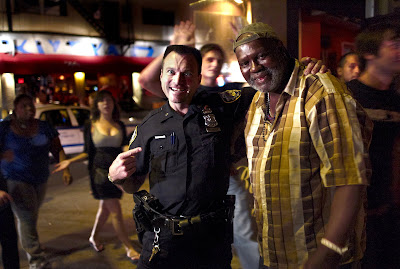 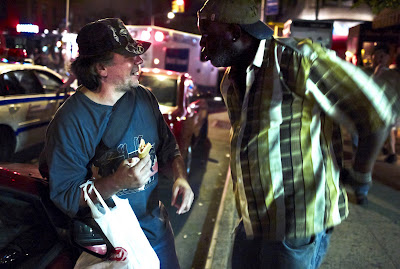 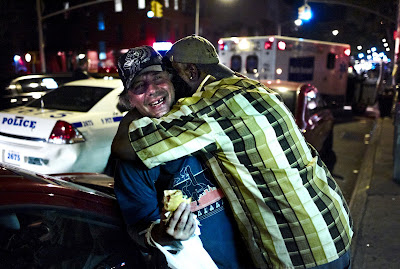 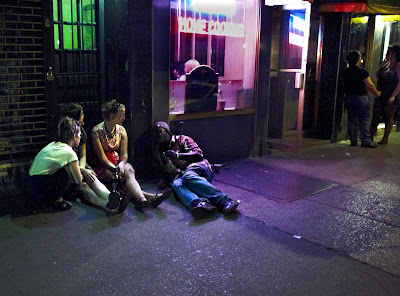 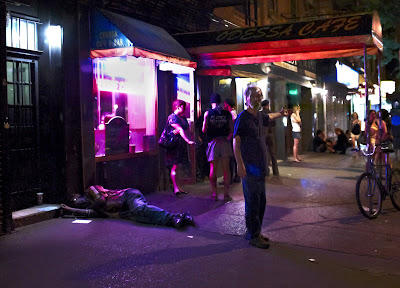 The empty plastic half-pint bounced off the curb into the street . Larry had offered a swig , we declined and he swilled the portion of alcohol remaining while claiming "I just can't get away from alcohol" tossing the bottle to avenue A . We were a bit stunned ,talking to a man back from the dead .
We had posted twice here of Larry . Once in a post with Blind Mike , who according to Larry died recently in prison , and once in a post with Coney Island Mike who is frequently seen on avenue A and was posted of here 2 posts ago . In both posts we noted that sadly Larry had passed on .
The story was that Larry had been taken off avenue A a couple of years ago with a severe case of pneumonia and according to all he had died of this pneumonia in the hospital . Clearly not the case at the corner of avenue A and 7th street Saturday night . Larry claims to have spent 2 years in a program in Brooklyn where they healed him , dried him out , cared for him and gave him a prosthetic replacement for the arm cut off by a train when he passed out on the subway tracks .Saturday night a very tall and talkative Larry was standing and soliciting coin very politely from the patrons seated at the tables at 7A cafe . Larry was collecting for another bottle.
Larry worked his way up avenue A to Ray's . He entered the store , stood at the counter and asked a very surprised Ray for a hot dog . Ray had believed like everyone else that Larry was dead . Ray said "I thought you were dead man" then routinely offered Larry a "free" hot dog at the window outside Ray's candy store , otherwise it would be $2 for him inside the candy store at the counter . Of course Larry knew , as many others from the street do , the routine . Larry went to the street side window twice Saturday night .
Larry for a while succumbed to all the alcohol that he had consumed . He went down on the door step next to Ray's candy store . Some one called for an ambulance . When the ambulance and police arrived Lazarus Larry surprised members of the 9th precinct who had also believed him dead . He declined a trip to detox and the evening continued on avenue A.
In front of Ray's Larry's old drinking buddy Jay spied Larry . Jay made a remark concerning a funny looking tired old ass and an angered Larry not recognizing Jay ran growling and threatening at Jay ...then when he saw that it was Jay they both laughed and hugged . Larry wanted to walk to the liquor store with Jay to buy another plastic bottle of vodka but Jay who is now on the wagon for several months declined the invite .
The evening continued on the avenue with a little feminine attention for Larry and then bedtime .

Comments:
I am so thrilled Bob!!! There is such thing as a happy ending afterall...Large Larry is back from the dead!!! It's a great thing....

MY BROTHER FROM ANOTHER MOTHER...I COULDN'T BELIEVE IT BOB!!!